I first heard about Bhojanic from Atlanta magazine in the fall of 2011, when they appeared (out of nowhere, at least to me) on the list of the 50 best restaurants in Atlanta.  Since then, I’ve been looking for the right time to go and this afternoon, when we were heading downtown relatively early, I grabbed a reservation at their new(er) location at the Shops Around Lenox.

When we arrived, shortly after they opened at noon, our reservation seemed pointless – the place was empty.  Most of the waitstaff wasn’t even there yet.

These photos are the views from our table (one of the half table / half booths lining the right wall – shown in the photo on the left) – the picture above is toward the back wall of the restaurant and the picture below is straight across the restaurant from us.

We started with the chat papri – crispy flour chips with garbanzo beans and potatoes, covered in mint chutney, tamarind chutney and a yogurt sauce.

The first startling thing about this dish was the surprise that it was served cold.  From looking at it, I assumed it would be warm, but it was not.  The second was how good it was.  The tamarind chutney was sweet and the mint chutney was kind of spicy, while the yogurt, dill and lemon sauce cooled things down nicely.  A great starter, which stayed on the table through the entire meal.  In fact, as we were getting ready to leave, Jo said, “Ooh! I see a chip I missed.” <g>

She decided to make a meal of two appetizers, the eggplant makki ki roti – 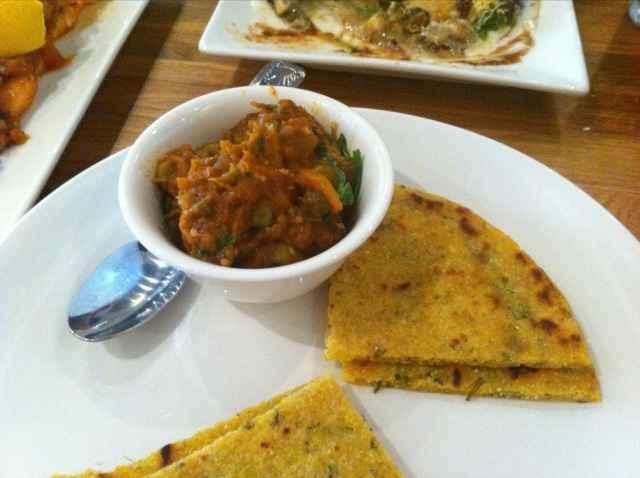 We both, in reading the menu, made an incorrect assumption about the eggplant dish – we saw “flatbread” and thought thin-crust pizza, when we should have though “fry bread”.  She said it was fine, but nothing spectacular.  The shrimp, on the other hand, were outstanding.  And I can testify to that, as one was shared with me.  She’s already making plans for another visit where her meal will be composed of the chat papri and the shrimp Bojhanic.

I went with a thali, a traditional Indian (or Nepalese) meal comprised of several different dishes, served, in this instance, on a metal tray, which reminded me immensely of prison meals in 40s film noir movies.

The thalis are all served with Rice Pullao (like a rice pilaf), Chapati (whole wheat flat bread, served warm – like tortillas with fajitas), Raita (cucumber yogurt sauce), Pappadam (crispy lentil cracker) and a side salad.  They can be ordered as vegetarian or with one or two meats (three total choices from rotating daily specials).  I chose: Chili paneer –

paneer (an unaged Indian cheese), sauteed with garlic, curry leaves and bell peppers, in a tomato and onion masala; 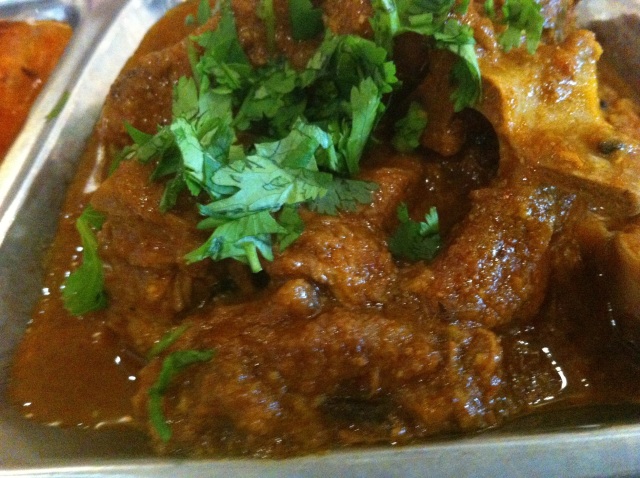 goat curry (on the bone), in a ginger, garlic and onion and yogurt curry; and 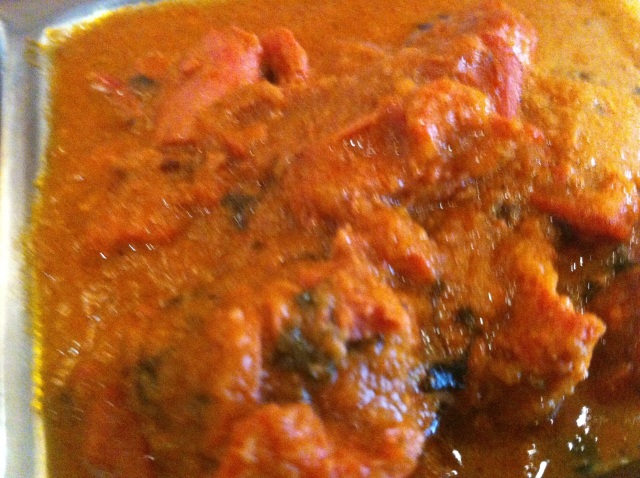 chicken tikka masala – boneless Tandoori chicken in a tomato cream sauce.  The chicken was the standout dish – just the right amount of kick to it.  And when you put some of it and some rice on a piece of Chapati and dipped it in the yogurt sauce, it was a wonderful combination.

The food was exceptional, but I don’t think we’d have enjoyed it nearly as much without the excellent service from our server, Michael.  He answered questions, made suggestions and constantly checked on us (without being annoying).  An absolutely great server (maybe it’s a phase of the moon or something – we actually had a really good server at Olive Garden (that was not my choice) on Friday night).

We left stuffed and both agreeing that we’d gladly eat there again.  I can see why they made Atlanta Magazine’s list.  Now they’ve made mine.

Leave a Reply to My best of 2013 | Burgers, Barbecue and Everything Else Cancel reply