When you drive by a place and see the cowgirl on this sign, how can you not stop?  That was the dilemma I was faced with.  I had seen another location on Friday afternoon and had then driven by this one on the way to Fat Mo’s.  (Whenever I see a tag line like that on a sign, I’m reminded of the movie Elf – “You have the world’s greatest barbecue? Congratulations!!”  I made a mental note of how to get back there and after a quick bite at Fat Mo’s, I swung back by to eat a second lunch (it’s kind of fun eating like a hobbit)..

Apparently, Bar-B-Cutie has been around Nashville for over sixty years.  They began franchising, according to their story, in 2004 and there are thirteen locations in the US (two of those are in Georgia, both relatively near me – in Acworth and in Woodstock) and, oddly, three locations in Spain.

They put the hokey on pretty heavily in their decor.  It actually resembles an old Po’ Folks with red checked tablecloths.  They offer five choices of sauces, on the table:

The mild sauce and the hot sauce had very similar flavor profiles, except for the heat added to the latter.  Carolina sauces have never been my favorite, but this one had a nice little bite to it.  The sweet sauce was a little over-sweet, for my taste, and the Tennesee Fire was a really spicy vinegar sauce.  I found that a combination of the sweet and the hot sauces to be a good mix for me.

I chose the sampler platter (ribs, mesquite grilled chicken and pork) with one side (lima beans) and a choice of cornbread or “barbecue toast”. 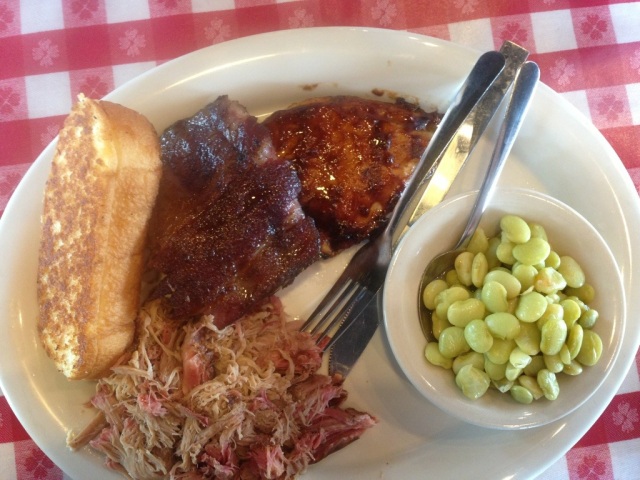 The lima beans were extremely bland.  I kept adding salt, and they kept getting saltier, but the taste never improved.  In looking at the reviews, the negative comments are almost all in relation to the sides.  If my limas were any indication, I can see why.

The pork had a great smoke ring, a good bit of char, was very moist and was full of flavor.  For chain barbecue, this was way above my expectations.  Adding some of the pork, with the sweet and hot sauces on the barbecue toast made for a tasty combination.  I imagine this would make a really fine sandwich. 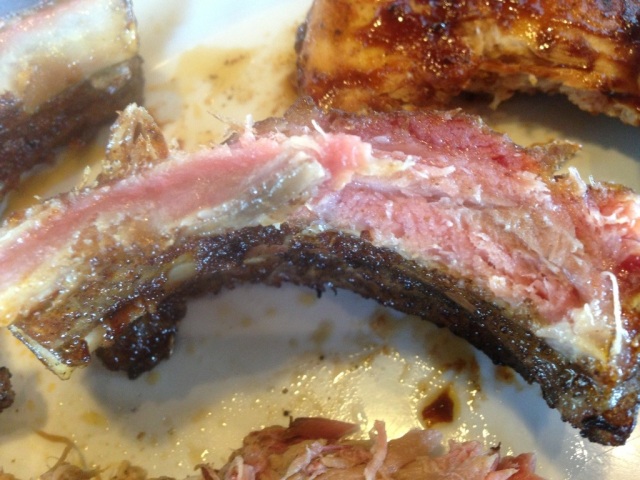 The ribs had a similar smoke ring (they’ve apparently got the hang of that smoking thing down) and the meat pulled off the bone easily.  They were meaty and quite good.

The mesquite-grilled chicken, on the other hand, was awful.  There’s no other word for it.  I don’t know if it was the generic, thick, mesquite barbecue sauce or the bland chicken, but there was nothing good about it.

So bad sides and bad grilled chicken.  Who goes to a barbecue joint to eat those?  The barbecue itself was very good, reasonably priced, and (if you’re in the right neighborhood) readily available.  That’s a winner for carry out.  We may have to make a road trip to Acworth.