As you drive south on I-24 from Nashville, there are repeated signs touting the glories of Sugar’s Ribs (“Best Barbecue – 2011”, etc).  Then as you  head through Chattanoga, just as you’re about to go into the giant curve toward Atlanta, you’re suddenly confronted by this giant woman holding a tray of ribs, with a sign that says Bigtime BBQ.  I couldn’t resist (this time) and followed the directions to get off at Exit 81 and ended up in the parking lot with this sign by the door

(and a smaller sign on the bench telling you not to sit there).  The restaurant is on a steep hill looking back over downtown Chattanooga, with goats that live on the lower part of the hill, keeping the grass low and being fed by folks leaving the restaurant.  The counter is right as you walk in the front door with a menu posted above.  Following wise advice to always order ribs at a place with ribs in the name, I ordered a half slab and grilled corn. 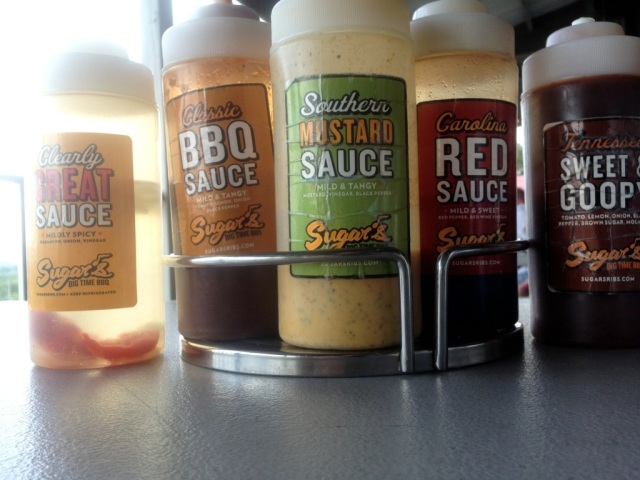 There is seating both inside the restaurant and on the outdoor patio.  I found an empty picnic table outside and gathered the full array of sauces (above) and sampled a bit of each in the small clear carryout containers on the table.  The Clearly Great Sauce was like pepper sauce that you’d put on greens – I can’t imagine that being good on barbecue, but they sell it.  The other sauces were exactly as you’d expect as they were labelled.  The sweet goop was indeed that and it ended up being my favorite. 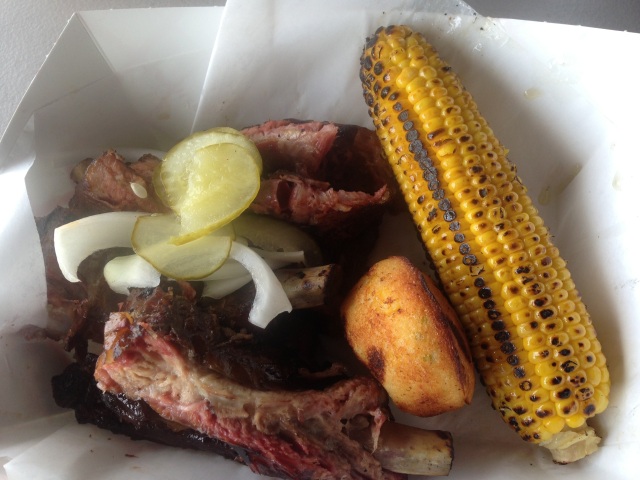 When they called my number, the basket of ribs (topped with pickles and onions) arrived, including a sweet cornbread muffin.

These were without a doubt, some of the tenderest ribs that I’ve ever eaten.  The meat just peeled from the bone with the slightest touch of a fork.  The only bad thing about these ribs were that they weren’t Swedish baby backs <g>.  I did clean the basket (except for the pickles and onions).

This beauty is on the front porch of Sugar’s over-looking the interstate.  I thought the weather vane silhouetted against the sky made for a fitting finale to this road trip.