Several months back, I read in one of the Yelp blogs about a new chicken “shack” opening in Atlantic Station from the Bantam & Biddy team, Chick-a-Biddy.  They opened a little over two weeks ago, and I’d been intending to get there at some point in the near future.  As I was heading downtown to meet some friends, I realized this would be a great chance to try it out.

Unfortunately, I didn’t realize that the BB&T Atlanta Open was going on at the same time.  Traffic pulling onto 17th Street was horrific, but as I drove toward the Publix end of Atlantic Station, traffic abated and I parked in the underground deck at that end.  Taking the giant escalator up toward BGR, I expected Chick-a-Biddy to be right there, in one of those restaurant spaces.  It was not to be found, but I found the map and saw that it was on the corner across the street from and on the west side of the theater (in the space that was once the Grape and has been a couple of things since).

As a party of one, I headed up to the bar and took a seat straight in front of the kitchen.  In an empty restaurant, this can be a good thing as you can see the food coming out of the kitchen and get some ideas of what all they serve.  In addition to the bar seating, and the tables behind me, there is also seating outside. 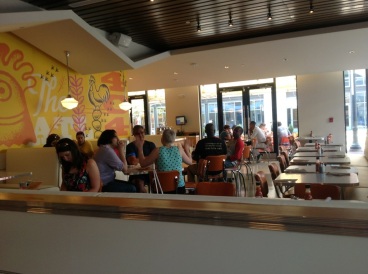 This view is from the bar looking back into the restaurant

The bartender, Vladimir, was extremely outgoing, walking up and introducing himself as soon as I sat down.  I knew that their focus would be on farm fresh, organic ingredients.

When I was looking at the menu, the first words I saw were “Fried Chicken – Hot or Mild”.  I stopped looking and asked Vladimir what exactly that meant.  I told them that if this was indeed Nashville-style hot chicken, I was about to the happiest man in Atlanta.  The kitchen manager came over to join us and I asked if this was like the chicken at Prince’s, and he said that Shaun Doty (one of the owner’s) was a fan of Prince’s and made this his version of that hot chicken.  He also told me that he hadn’t been able to finish a single piece of the hot version.

I could smell the cayenne coming before it arrived.  When it came to the bar, I inhaled and felt the burn heading up my nostrils.

I ordered a side of black beans and rice (which had a different flavoring to the black beans that I didn’t find appetizing) and fries.  The fries reminded me of those at Yeah Burger – hand cut, skin on and nearly perfectly fried.

I picked up the first drumstick (I had the half chicken – four pieces, which included two drumsticks.  I guess it was the bottom half) and took a bite.  You can taste the influence of Prince’s – it’s similar, but different.  The batter is just as heavy on the cayenne, but it doesn’t seem that the chicken was brined in a cayenne mix.  About half way through that piece, I felt the sweat start on the top of my head.  It was very good, not great.  But that didn’t stop me from eating all four pieces.

In several of the reviews that I saw, they complained about the DJ and the loudness of the music.  They all appeared to have been there on a weekend evening.  I didn’t see a DJ or notice the music, but based on the size of the place, I can imagine that it could get really loud, really fast.

While I was watching the kitchen I saw the Piri Piri chicken (kind of a grilled, Caribbean thing) and a kabob come out.  And a girl at the other end of the bar had a chicken sandwich that the best word for it was HUGE.  She seemed to enjoy it.   There was enough good looking food flowing out of that kitchen to make a trip back.  I’m thinking about brunch and some “mild” hot chicken and waffles.