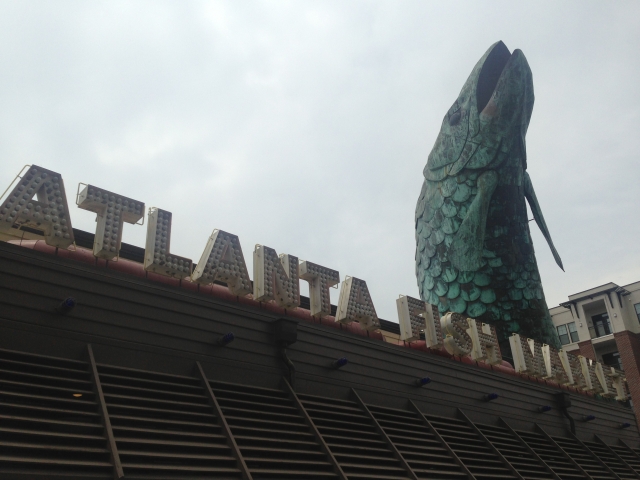 We hadn’t been to the Atlanta Fish Market in several years.  Armed with a gift card for the Buckhead Life Restaurant Group, we were looking for a dining option in Buckhead for lunch and AFM was the consensus decision.  That giant fish is quite a sight as you turn onto Pharr Road, off Peachtree.

We were there for a slightly late lunch and the place was fairly empty.  We were seated at a table in front of the large window facing onto Pharr Road.  It’s a huge place and on our last visit, years ago on a Friday night, it was packed.  I don’t know how the crowds are these days, but they have managed to stay open. 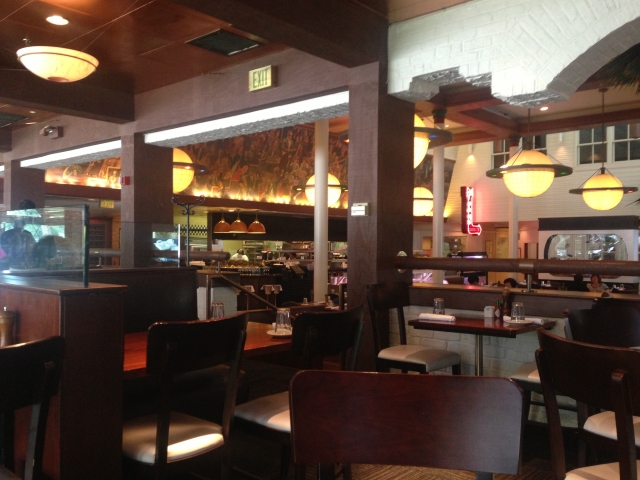 Today, we had an over-eager waiter, who often began talking to us as he hit the stairs coming up from the lower level.  If there was ever a drive-by contest for waiters, this guy could win it.  He started talking on the way to the table, dropped something off or picked something up, and kept talking as he walked away.

We started with the yellow-fin tuna carpaccio.

I expected a tuna tartare type dish (thinking that’s surely what they meant), but it truly was a carpaccio, pounded thin with scallions and red onions.  It was so thin that it was impossible to slice, but you could scoop some of it up with a fork and put it on the toast.  It was actually so thin that it didn’t have a “boatload” (fish pun intended) of taste.

with a soy and sherry sauce, ginger and scallions, served on a bed of spinach with sticky rice.  The sea bass (In one of my favorite food anecdotes, sea bass is actually Patagonian toothfish.  But that name didn’t seem to work for marketing in North America.  A fish importer re-branded it as Chilean sea bass in the late seventies and it became a top selling white fish) was excellent, tender and flaky.  The salmon was good as well.

I chose the halibut,

a fish with which I became enamored almost a decade ago, served with mashed potatoes and green beans.  This was a good-sized chunk of fish and prepared perfectly.  The green beans were nearly raw.

A very nice meal and we still have a balance remaining on the card.