About two weeks ago, Grant from Marie, Let’s Eat, sent me an email suggesting that we find a barbecue place that neither one of us had written about and meet for lunch or dinner.  I told Jo about it and she said, “That’s sweet.  You have a “man-date””.   Then she cautioned that “it would probably be best if you met him at lunchtime in the mall parking lot.”  I reminded her that I was not nine years and he likely was not looking to abduct me, so that wasn’t as much of a concern.

I emailed him a subset (from my lists) of relatively close barbecue places that I hadn’t been to, which totaled six.  From that, he crossed two off that he’d written about, two that were closed and returned the remaining two, plus a couple of other options.  The name that caught my attention was Righteous ‘Que, a new place that has been open in Marietta for about three weeks.

We decided on tonight, and headed out meet and have dinner with Grant and Marie.  Righteous ‘Que is on the far side of Marrietta from us,  in a shopping center at the intersection of Piedmont Road and 120.  We arrived about four minutes late (not bad for cross-Marietta traffic on a Friday night) and they had already grabbed a table.  That was a good thing, as there were only four inside (and one or two outside).  Sitting down, Jo said that the guy at the table next to us was Bryant Wright (from Wright From the Heart – he’s on radio and TV here in Atlanta) and as soon as I heard him speak, I knew she was right.  He lives in the area and was in for dinner.  I asked Grant if there hadn’t been a barbecue place there before and he said it was Potbellies, actually at a building no longer in the parking lot, that had been closed for several years. 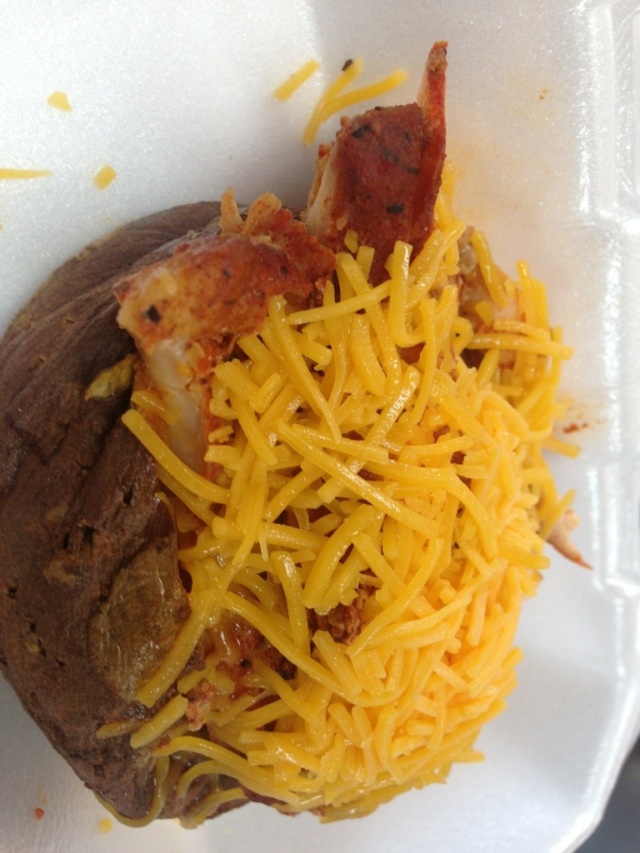 Now, I’ve had a “loaded” baked potato on many occasions (it’s the best thing, IMO, at Wallace’s and they have a giant one at Jim ‘N Nick’s, to name a couple), but I’d never heard of a loaded sweet potato.  Loaded = cheddar cheese and butter, plus a meat of your choice.  She chose the chicken, which was excellent and the only possible improvement could be in the size of the potato – the meat:potato ratio seemed high.  I’d have had no issue with that, as there was plenty of meat, but she would have appreciated a slightly larger potato.  She cleaned that carry-out container.

For a side, she decided on the cole slaw,

which was buttermilk-based, as opposed to mayo or vinegar.   It appeared to be good (from the empty container that remained) and I was surprised at how “dry” it looked.  As I was standing at the counter ordering, you could see one of the young men slicing the meat and she caught my eye from the table and told me to get some of what he was slicing (the brisket), too. 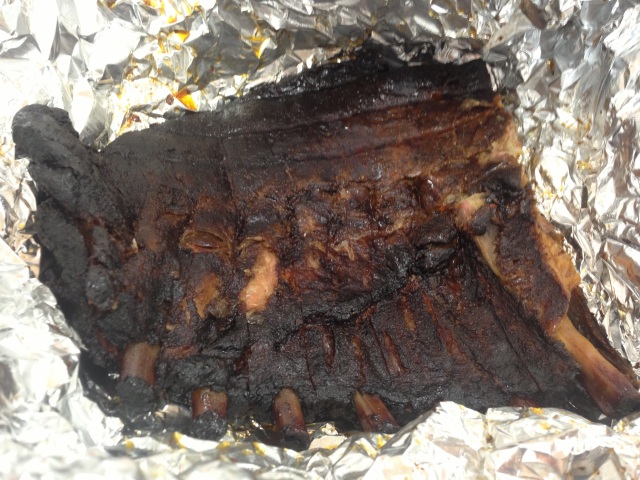 The ribs were cooked so tenderly that the meat absolutely fell off the bone.   They were kind of thin, but really meaty side to side with a solid char across the slab.  I was willing to share some, but it was next to impossible to get any on a fork to pass to anyone else.  I went through many paper towels.

About the sauce: they only had one.  It was thin and a little spicy and very good.  I didn’t wish they had another, although I certainly would have tried it.

For the side choices I was going to get macaroni and cheese and green beans, but as I was ready to place my order they said that green beans were about five minutes away (Marie ultimately got the ones she ordered, and said they were tasty).  I was willing to wait the five minutes, but then they then said ten minutes (maybe fifteen) so I decided on double mac-n-cheese, solely because it looked awesome. 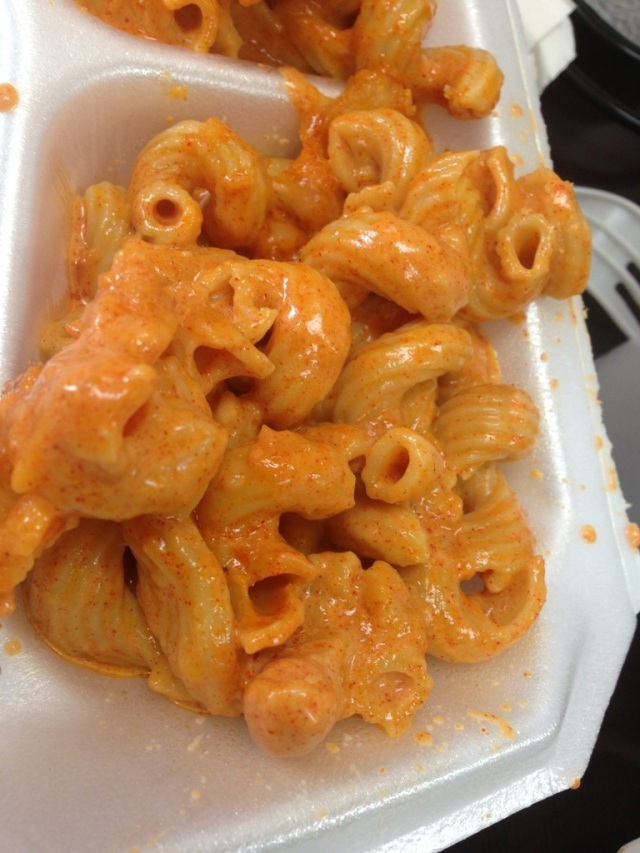 With that look, I was expecting some spice (there appeared to be cayenne flakes, or the like, in the sauce), but there wasn’t any, nor much flavor beyond that of macaroni and cheese.

The brisket was excellent,

moist, fork tender, and very well seasoned.  I noticed as they sliced the brisket (which they kept wrapped in plastic wrap when they weren’t slicing it, in a warmer) that they scooped the juice back onto the brisket itself before wrapping it to keep it moist.  It appeared to work.

I can’t say enough about the friendliness of the staff and the owners (Toby and Patrick, who were both working behind the counter).  When we had pretty much finished, Jo and I got up to take a picture in front of one of their signs and Toby asked if we wanted  a picture in front of the smoker.  Heck, yeah.

He took us out the back door and showed us the Southern Pride 500 in the parking lot, 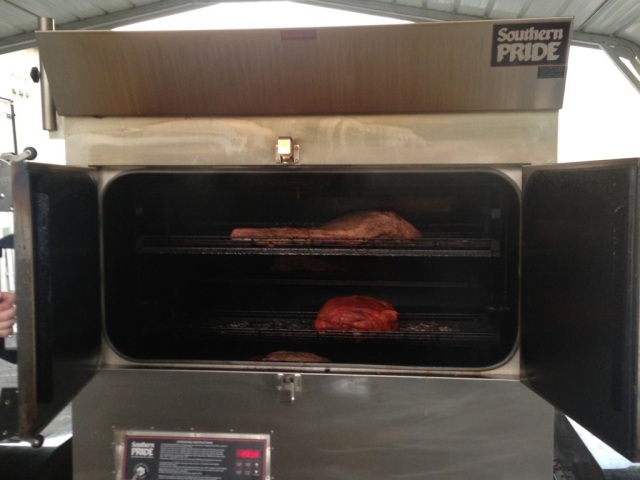 where they cook between four and five hundred pounds of meet a day.  The temperature was sitting on 219 before he opened the door, and he said that when they opened it back up in fourteen hours (at 9:30 on Saturday morning) the brisket and pork would be ready.  He said they liked to keep the pork above the brisket to help keep it moist and they cooked on a mix of oak and cherry (to add a little sweetness to the smoke).

When we got back inside, I had just enough room left for a small cup of banana pudding,

which (oddly) resembled an egg.   They make the pudding single serving size cups, which had three layers of vanilla wafers topped with pudding and serve them that way.  It was good pudding and a good ending to the meal.

You can tell that a huge part of their business is carryout as they aren’t really set up to accommodate dining in (no salt & pepper except in small packets, pre-packaged food service small forks, knives and spoons, only carryout plates – that type of thing) and they were doing some serious carryout business.  And these people’s heart appears to be in the right place (check out their “Que for a Cause” program).

They are, indeed, serving up some righteous barbecue, at a “holy” acceptable price point.  We enjoyed the meal and thoroughly enjoyed meeting Grant and Marie – it was great to pick their brains about how they work together on one of the best food blogs in the city.

As we were driving home, Jo said “I wish they [Righteous ‘Que] were a little closer”.  It’s like music to my ears when she wants to go back to a barbecue place.  This verse was sung sweetly.