(I realized as I was writing this that I was really overusing parentheticals. Then I tried to stop using parantheses (but I couldn’t). Pardon me in advance.) 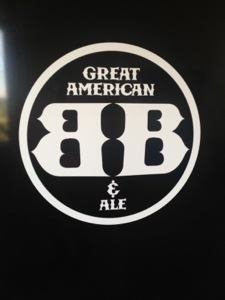 I had seen the sign for the Great American Burger Boutique and Ale (G.A.B.B.A) several times, driving north on Peachtree Industrial.  I just wasn’t sure exactly where it was.  As I was exploring lunch options today, I remembered it, plugged its address (from a Google search) into maps and proceeded to drive right by it.  I just caught it out of the corner of my eye (as I was heading another 3.1 miles south) and made a (legal) U-turn at the next light.

When you arrive at a place at 12:15 on a Monday and the (visible) staff to patron ratio is 1 : 2 (two people working : two women at the bar and two men at a table) when you walk in and the ratio goes ups to 2 : 5 when you do, that could be a harbinger of the burger to come.  The odds actually got higher as  third person appeared from the kitchen – it was now 3 : 5 (staff : patron).  The music is loud (I imagine carrying on a conversation would be difficult – but I’m lunching alone), but if it wasn’t so loud you might hear crickets (it’s that empty).  I count fifteen TVs (plus an overhead projection one that isn’t on) on a total of six different channels.  I have my choice of seats and settle in front of one playing a re-run of the Andy Griffith show (it’s the one where Goober is coaching Opie’s baseball team and Andy (dressed completely in black) is an umpire).  The floor is dark, the walls are dark, the booths are dark.  It’s a sports bar.  A really empty sports bar.

The menu is definitely burger-centric.  I was going to include a link to their menu (or a link to their website) but I can’t – their website just isn’t there.  I decide on the Southerner burger (with pimento cheese and bacon marmalade) on wheat (there was a choice of that or brioche).  There was an option to make the sandwich into a “Dirty Bird” for an extra buck.  I couldn’t find where (on the menu) that was noted, so I asked – it becomes a chicken sandwich instead.  One thing that’s unique is the availability of sweet potato tots – I don’t like them, so I didn’t order them, but that’s certainly different.  I ordered regular tots.  When the plate arrives (10-12 minutes), I note three things:

There are a lot of tots on this plate.

There is a pickle (and, correspondingly pickle juice) on this plate.

And there is lettuce and onion on my burger.

The last two would have been acceptable if I hadn’t addressed it, but the waiter / bartender / host asked me if I wanted everything on my burger and I said (I believe clearly), “just tomato, please.”  I ordered the burger medium and it came out a little shy of that (okay, maybe a lot), 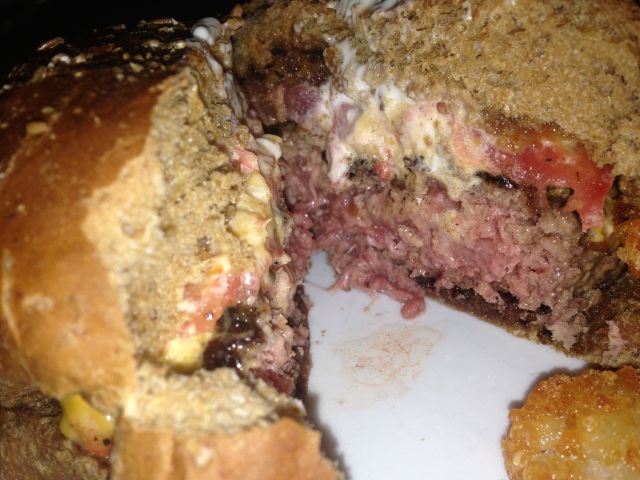 but I would prefer medium rare over medium well any day, so I didn’t say anything.  It was a really solid burger.  They said they used only fresh ground Angus beef and I’d believe it.  The pimento cheese was good.  The bacon marmalade (think a strip of bacon run quickly through a Vitamix) was good.

While I was waiting, I looked at the Yelp reviews and they (mostly) said the same thing – we went in, it was empty and the burger was good.  Some folks mentioned bad service in their review.  I did not experience bad service.  I’d add that it was pricey (at least according to the menu):

So, I’ve basically said that the place was loud, dark, empty and kind of pricey.  Would I go back?  Sure – the burger was very good.