For months, everywhere I’ve looked, people have been raving about the General Muir.  From all of the press right after it opened, to Atlanta Magazine recently naming it their Restaurant of the Year, to, most recently, being named one of the fifty best new restaurant nominees by Bon Appetit for their 2013 award.  I’ve been meaning to go, honestly, for a couple of months, but things hadn’t worked out.  On this drizzly Saturday, I committed and into town we drove. 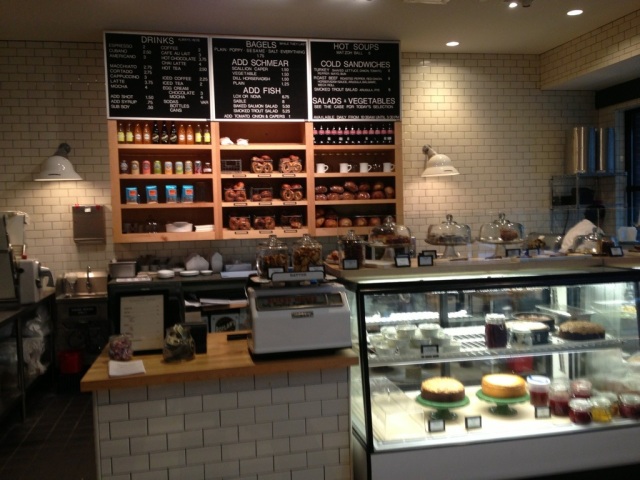 We pulled into a beautiful new mixed-use development near Emory and tried (unsuccessfully) to use the high-tech, credit-card-only parking meters to no avail, and ended up parking in the two-hours-free garage across the street.  We walked in through the door at the deli end of the restaurant (pictured above).  We did pick up a bagel from the deli, as we left, for later, and admired the desserts (the black and white cookies – “Oh look Elaine, the black and white cookie.  I love the black and white.  Two races of flavor living side by side in harmony.  It’s a wonderful thing, isn’t it?” – and the kugels looking like the standouts) and the wrapped corn beefs. 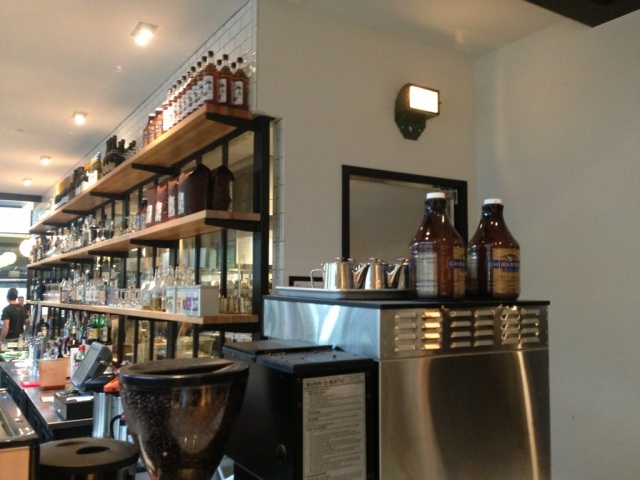 We waited a few minutes on the back side of the bar as we arrived right at the tail end of the lunch crowd.  After about ten minutes, during which we studied the menu and checked out the dinner menu for a planned return trip, we were shown to our table.  We were seated against the left-most wall of the restaurant, by the covered patio, with the rest of the restaurant and the glass walled kitchen (below) to my right.  Sitting by the window, we were both struck by the fairly large green space beyond the patio.

The brunch menu wasn’t terribly broad, and I honestly knew what Jo would order before she ever saw the menu.  She loves a Reuben and, knowing it was one of their signature dishes, she chose that. 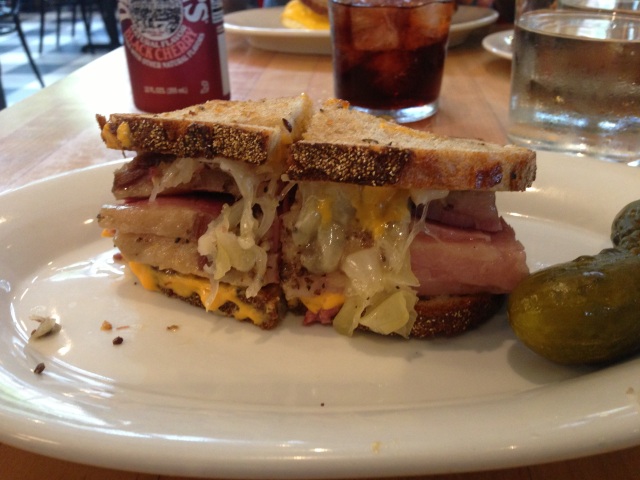 I had read that they cured their own corned beef and pastrami and I was looking forward to (hopefully) tasting some of the corn beef when it arrived.  Luckily, the sandwich was huge – thick slices of corned beef (three deep in the middle of the sandwich) – and Jo removed the middle level which, magically, appeared on my plate.  This was incredible corned beef – thick-cut, salty and with just enough fat to give it a real flavor.  (I actually saved a half a slice to be the “final bite” of my meal, with a piece of the fried egg.  I always like to save the best for last.)  When everything was said and done and her empty plate was taken to the kitchen, she declared that it was “the best Reuben she had ever eaten”.

Not being a sauerkraut fan, that kept me from ordering a Reuben, so I had to decide between the pastrami with fried egg and the burger.  Going for the full deli experience, I made sure I could get the egg over-hard (as I hate a runny yolk) and chose the pastrami and fried egg sandwich,

with American cheese and Russian dressing on buttered rye.  This was an awesome sandwich – a salty, tangy and gooey mess.  I devoured every bite.  I think that, possibly, it would have even been better with that corned beef than with the pastrami, but there was no faulting this sandwich.

And we shared an order of schmaltz potatoes – cubed potatoes, pan fried with cabbage, onions and peppers

I had to look up “schmaltz” and learned that it wasn’t the mix of the vegetables in the dish, but the way it was cooked – schmaltz is rendered fat (usually goose or chicken fat is used) used in the place of butter.  So these were potatoes pan-fried in goose fat?  No wonder they tasted so good.  They were perfectly crunchy without being burned.   And the sandwiches were so large that we could share a single side and walk away full.

Now I get it – I see why everyone is talking.  They’ve managed to re-create an authentic New York deli in both feel and flavors.  I can’t wait to return, in fact we were discussing coming back soon for dinner with another couple in the car on the way home.