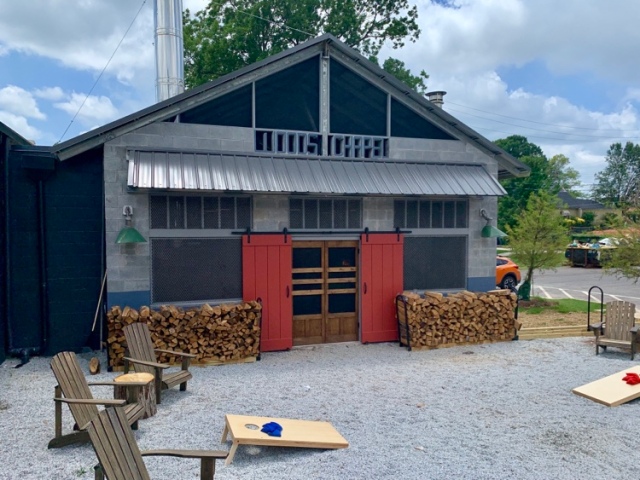 Open for about two weeks when we visited, Wood’s Chapel BBQ, is in a new development on Georgia Avenue, just a couple of blocks from the former Turner Field.  From the team behind the General Muir, Fred’s Meat and Bread and Yalla (they also have partners from West Egg), they are another outpost for whole hog barbecue in the metro and also smoke a mean brisket, ribs and salmon (now, there’s a different protein for a bbq shack).  In a very newly finished, yet unfinished-looking, space, they have communal seating and high ceilings and (on this day) fairly loud 70s rock. 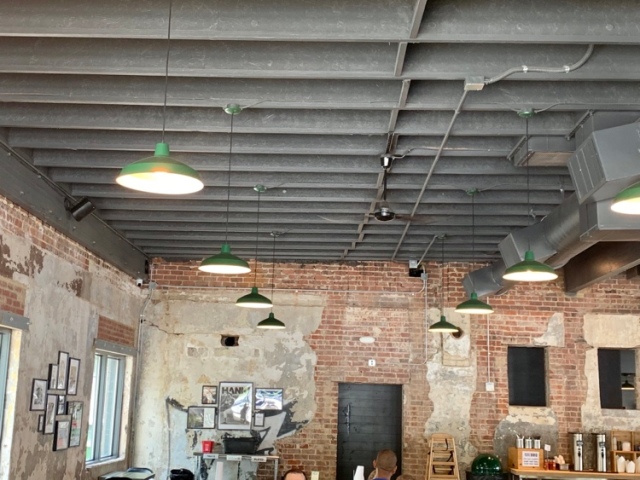 There is a game area in the back with darts and shuffleboard – an area which fronts the kitchen.  And behind the curtain (in the photo below) is more seating. 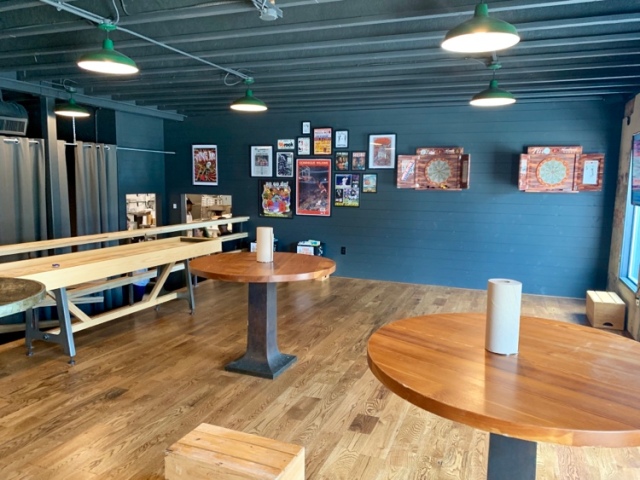 You walk in the front door and the counter, and ordering line (which was constant the entire time we were there) are to your right.  In a brilliant piece of marketing, you have to walk by the pies before you are able to place your order.  Hard to resist.  And once you’ve had a slice, just like the Borg, resistance is futile.  The pie system is unique as well – when you order a piece of pie, you get a poker chip to redeem for pie when you’re ready for it.  So you can order, and pay for, your pie when you order your meal, but pick it up when you’re ready for it.  Nice move. 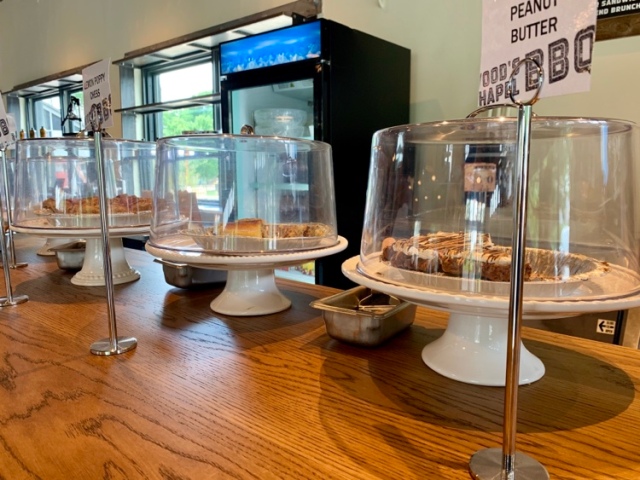 They have three sauces (in the large metal tea containers below)

We discussed whether the steel containers would impart any flavor to the sauces, but they did not appear to. 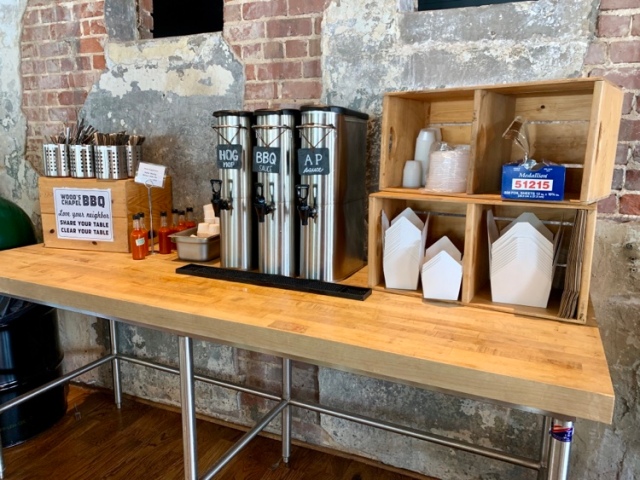 I ordered a two meat plate with two sides, which I intended to share, and my beloved ordered two of the sides:  Her sides were Vic’s salad of the day, which was a cold salad of corn, tomato, cilantro and lime juice, and the pork beans and burnt ends. 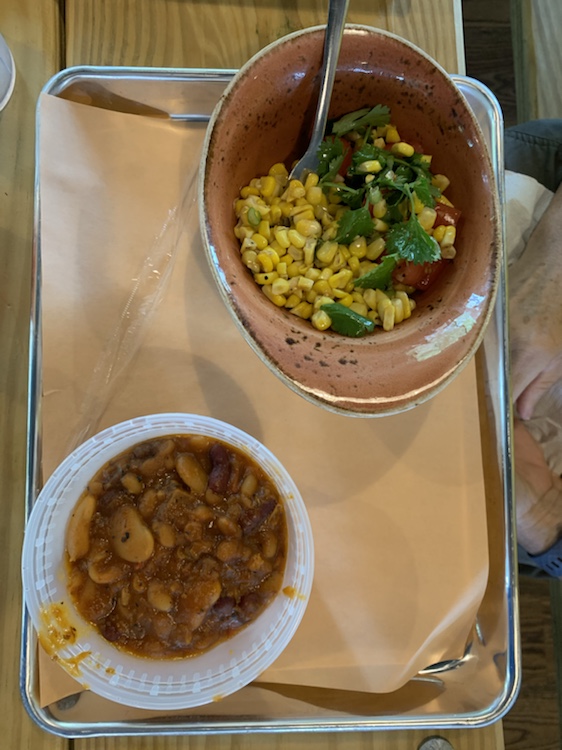 The salad was very light and fresh and she LOVES cilantro, so she really enjoyed it.  The pork beans and burnts ends were full of different kinds of beans, but seemed light on the burnts ends.  My plate was the whole hog, from Riverview Farms, and sliced brisket, with pork belly fried rice and creamed corn, with chili mayo, cojita cheese and lime. 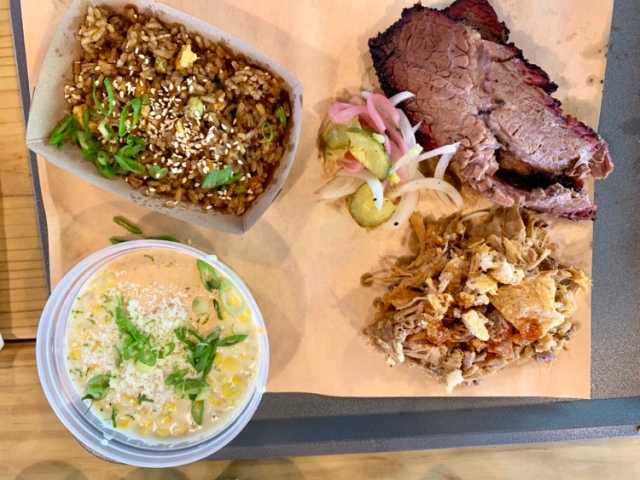 The whole hog was excellent – a perfect level of smokiness and crunch in the bark and they served it with a few cracklins thrown in.  Superb.  And the Hog Mop, which was surprisingly spicy, made this some of the best pulled pork that I’ve had in Atlanta, in the last few years.  The brisket had a nice smoke ring and was comparable to the better brisket you can find in Atlanta, currently.

The sides (which were heavy on the green onion – what’s the deal with that?  Everyone seems to get carried away with green onion) were very modern.  Of the four, the best were the cold salad and the pork belly fried rice.  The pork belly in the fried rice was hard to discern as to what meat it was, but they had me at pork belly.  It was good, though, not like Happy-Golden-Buddha-Dragon fried rice.  The traditional sides (slaw, baked beans, mac-n-cheese) were good – they just weren’t very traditionally made. 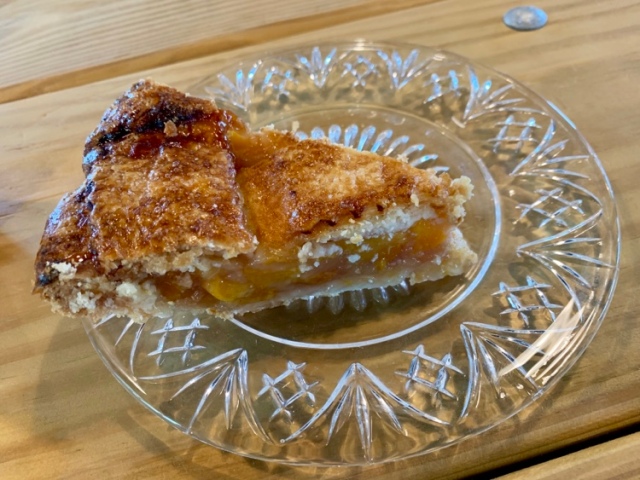 This peach pie was “lick your plate” good.  So good I thought about going back and standing in line again for another piece.  It was one of the best cold pies I’ve eaten in years.  I was telling people as I left they needed to order a slice.  And I’ve also told everyone since I left…