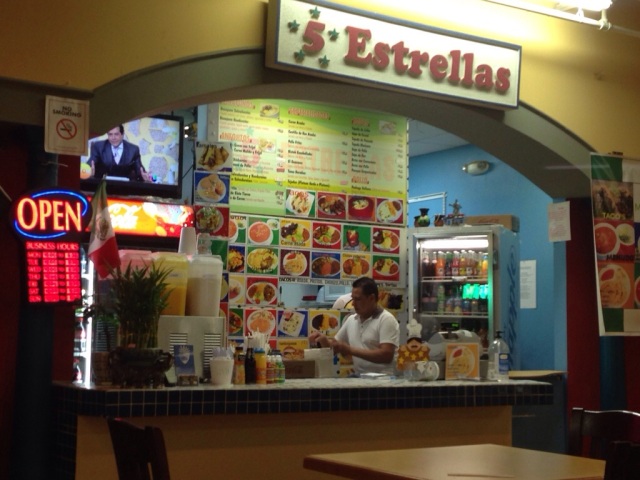 After reading a review in Atlanta Magazine about the wonders of the food court at Santa Fe Mall in Duluth, I had mentioned it to my daughter and her boyfriend, based on proximity to his house and her love for Latin American food. They had visited several weeks ago and talked about how tasty, and economical, it was. Today, when I was looking for a lunch spot I thought I’d head over and give it a try. Arriving a little late for lunch, there were folks seated at three or four of the common tables and three choices for restaurants.

After looking at menus (PTL for picture menus – I didn’t recognize many of the dishes by name) I decided on Cinco Estrillas (Five Stars), a Salvadorean and Honduran place with a varied menu. I chose the carne asada.

I did not choose cheaply, but I certainly chose tastefully. This was a highly unusual presentation (at least to me) in that the dish was served with both a whole chile and what appeared to be a giant whole green onion, that had both been grilled. The skirt steak itself was seasoned and cooked perfectly and served steaming hot. And it was accompanied by some of the best frijoles charros (cowboy beans) – in spite of the odd hot dog slice I found in there – that I’ve ever had. The only downside was it was served with corn tortillas, as opposed to flour

I went back and picked up the two containers of sauce – a mild chili verde (green) and ridiculously hot, and really good hot sauce (red). I plan to go back and try the puposos (which are what I believe that my daughter recommended. What a pleasant find.