A couple of months back, I noticed BurgerFi when I was driving through downtown Kennesaw.  I made a mental note to come back there, but almost immediately forgot about it.  Then, last month, some of our friends mentioned that they had been there for lunch.  They said that the burger was good so we thought that, on this Saturday, we would give it a try. Looking on line, there are three metro locations open (Alpharetta and Emory Point are the other two) and one other in the works for this Florida based chain.

When we arrived almost at noon, there was a sign out front for an event that was going on, benefiting Autism Speaks.

Unfortunately, once we got inside the young lady behind the counter had no idea what the “event” was or how it worked.  It didn’t look like anything different was occurring from their standard process.  We asked if part of the profits were going to autism.  She had not a clue.  As a result, we made neither a burger nor a friend.

The concept is very much like the rest of the fast fresh food franchise burger world (SmashBurger, Burger21):

From an appearance standpoint, it looks very much like larkburger:

right down to the wood paneling (which is also present to a much lesser extent at Yeah! Burger).

There were a couple of issues here, right out of the gate:

On to lunch, Jo ordered the B.A.D. (breakfast all day) burger 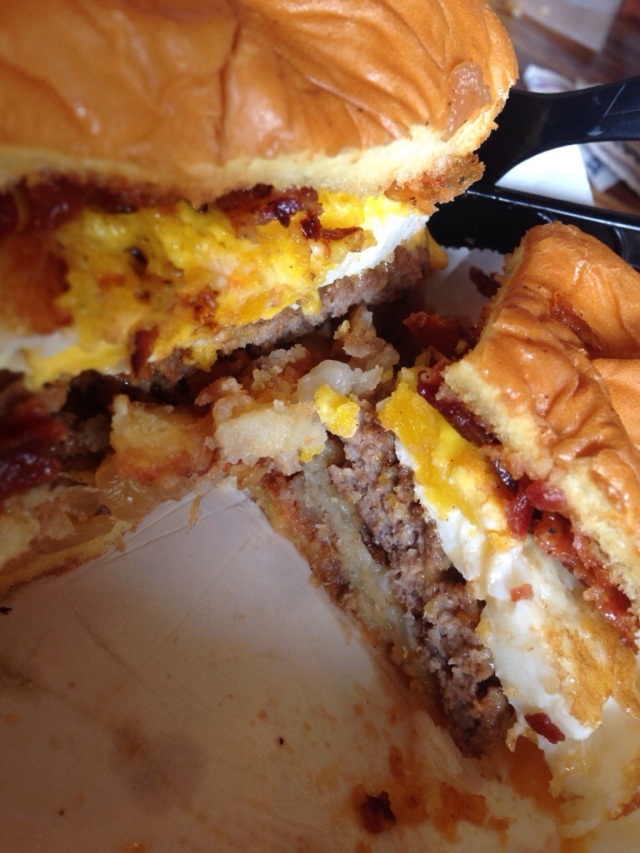 from top to bottom – bacon, maple syrup, a fried egg, hash brown, American cheese, diced onions and burger – which she said was both different and good.

I chose the brisket burger

made of twenty-eight day dry aged brisket with Swiss cheese, tomato and Burgerfi sauce (mayo plus fifteen spices, when I asked).  It is also usually served with blue cheese, lettuce and pickle (which I declined).  I did think that the branded buns were a cool idea, but this was the smallest $10 burger I’ve ever been served.  And I expected sliced or pulled brisket, not ground.  But that’s a combination of my barbecue nature showing and my inability to read a menu on the wall.  I also realize, in retrospect, that they didn’t ask me how I wanted my burger cooked, but that is fairly common in small patty places.

We decided to split a side of fries, which was plenty,

but they also had a family size fries stuff was HUGE.  It would have easily fed four (as we saw from the family of five seated near us.)  They were fresh cut, not too greasy and served hot.  And the onion rings we saw were massive, each the size of my burger, had it been a single.

I would go back, definitely at an off hour, and have a regular double cheeseburger, and likely leave a happy man.  For what its’ worth, they also appear to have a “secret” menu which offers options that aren’t published on site.