One day last week, I was asking someone where they thought had the best fried chicken in the city, after reading the article in the current Atlanta Magazine.  She explained that she wasn’t familiar with many of the places that made the list, but that her husband’s favorite place was the Beautiful Restaurant.  Then I remembered that I had seen the Beautiful on the PBS show Get Delicious (with Jim Stacy) a while back and that I needed to get by there.  Today, after some last minute Christmas shopping in L5P, we swung through the West End on the way home and stopped at the Beautiful.

Opened in 1979, as an outreach of the Perfect Church, at one time they had four locations in Atlanta, but today only have the one.  While they are set up like a cafeteria, it’s far from typical cafeteria food, reminding me of Matthew’s in Tucker.  If I recall correctly, I believe that they had six meat options (oxtails, fried pork chops, barbecued chicken wings, fried turkey wings in gravy, meatloaf and whiting) today and close to a dozen vegetables.

I was hoping for the fried chicken, but it wasn’t on the menu today, so I “settled” for a fried pork chop.  (That was said with my tongue planted firmly in cheek – fried pork chops are one of my favorite foods).  We had to wait, as they were bringing out a fresh pan of pork chops, so I ordered two <g>.  And a fried turkey wing.

The turkey wing was okay, covered in a brown gravy, but it  wasn’t crispy enough for me.  The pork chops, on the other hand, were absolutely wonderful – among the best I’ve had in a long time. 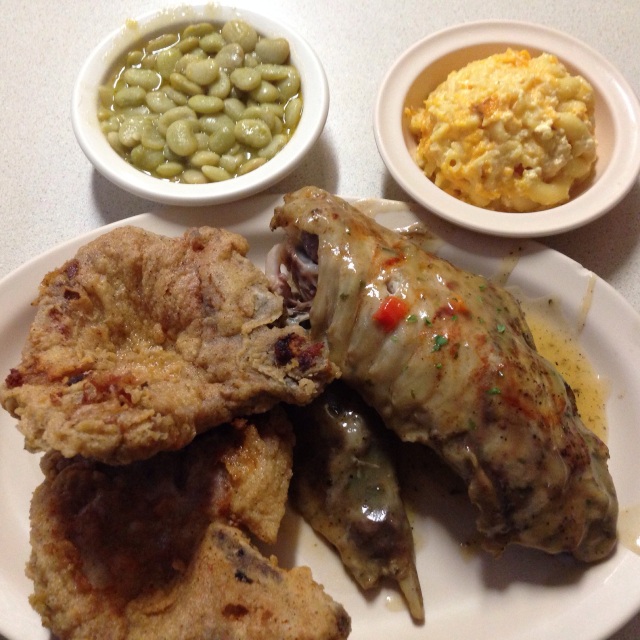 I can’t say enough good things about this pork chop.  We had three at my table and I left two of the bones in a state at which a dog would turn up his nose.  I chose macaroni and cheese and lima beans as my sides, along with the cornbread they offered.  The macaroni and cheese was excellent and obviously made from scratch.  Jo had collard greens that she said were among the best that she ever had and the other two both had the squash casserole and gave it rave reviews.

All around, an excellent home cooked Southern meal.  We were telling our youngest that this was the way that we both remember our grandmothers cooking. 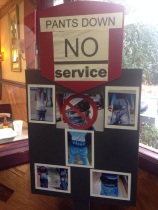 As we were walking out the door, I saw this sign in the entrance which I had missed on the way in.  I stopped to take this picture and could hear the guys sitting at a table just inside the door laughing and someone said “EVERYBODY stops to take that picture”.  This is not only a great sign for a restaurant but it could be a great motto for life.

Leave a Reply to My best of 2013 | Burgers, Barbecue and Everything Else Cancel reply