December 27, 2013 · by willoughbyandy · in Burgers, Decatur, Everything Else, Georgia · Leave a comment 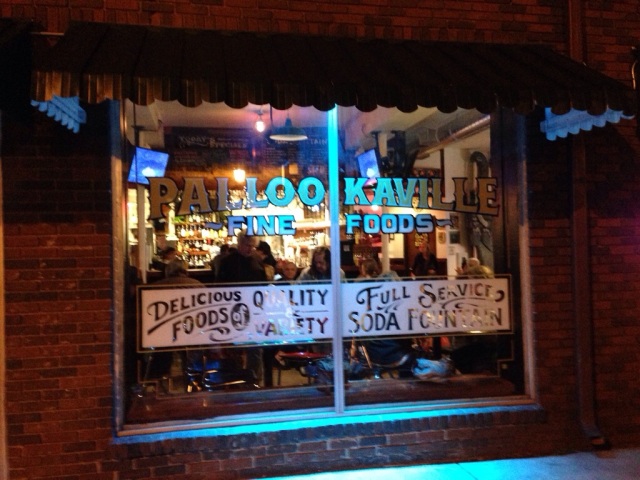 I’ll have to confess that when I told my wife we were going to a place for dinner that specialized in corndogs, I had a bit of a hard sell. And when I called another couple and said, “hey, y’all want to join us for dinner?  We’re going to get some corndogs”, the question was received in about the same manner.  But, corndogs it was and off we headed to Avondale Estates and Pallookaville Fine Foods.  Like many others in town, I’ve heard about the Pallookaville food truck but have never seen it.  When I read the article in Atlanta magazine earlier this month, and then saw Grant’s post about it on Marie, Let’s Eat, I set it as a destination for the near future.

Imagine stepping back into a 1950s soda shop, which also has a full service bar.  That pretty much describes the vibe.  The chairs reminded us of the plastic and aluminum things we had in elementary and middle school in the early 70s.  Pictures on the wall of 50s and 60s pop culture icons, displays full of old toys and a TV constantly running (when we were there) classic Christmas specials all combined to give it a certain je ne sais quoi.

After looking at all the choices for fresh-crafted soda flavors, and being tempted by the Tigers Blood (until I found out it was strawberry and coconut), I decided on a black cherry soda.  Very much like a Dr. Brown’s would be the best way to describe it, except to add that it was very good.  We asked our waitress what they were best known for and she said the pork burgers and, definitely, the corn dogs.  My meal choice was decided.

The corndogs are available in three varieties: a 100% beef Frank, a Polish kielbasa, or an Italian sausage.  They also offer the Fryinstein monster, which is one half of each dog each combined into one giant corndog.  You then pick your batter (regular cornbread, with cheese or with jalapeños – and you can have it double dipped) and they cook your corndog to order.  At our table of four, we had one corndogula (the 100% beef frank) and three Fryinsteins – plus I ordered a pork burger just to see what they were like.  You can see the plethora of food that arrived.

They house cut their french fries (which are small shoestrings) in addition to house curing corned beef and pastrami.  This leads to also having Reubens and pastrami sandwiches on the menu, in addition to the dogs, corndogs, salad and pork burgers.

I chose a side of fries, poutined (adding cheese curds and gravy) plus pastrami.  They also had tater tots – which were not made in house.  In fact, on the menu it said that if you want to go with processed potatoes this is the way to go – I found that humorous. 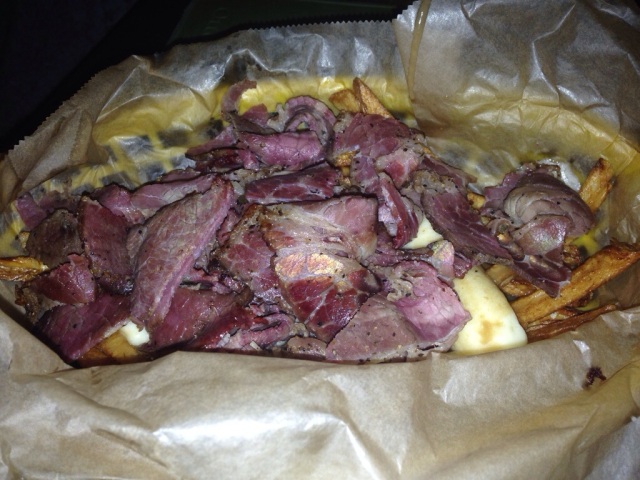 The fries were good, although greasy, and the gravy was great as were the cheese curds.  The pastrami was a little dry but it made an interesting dish.  On to the pork burger. 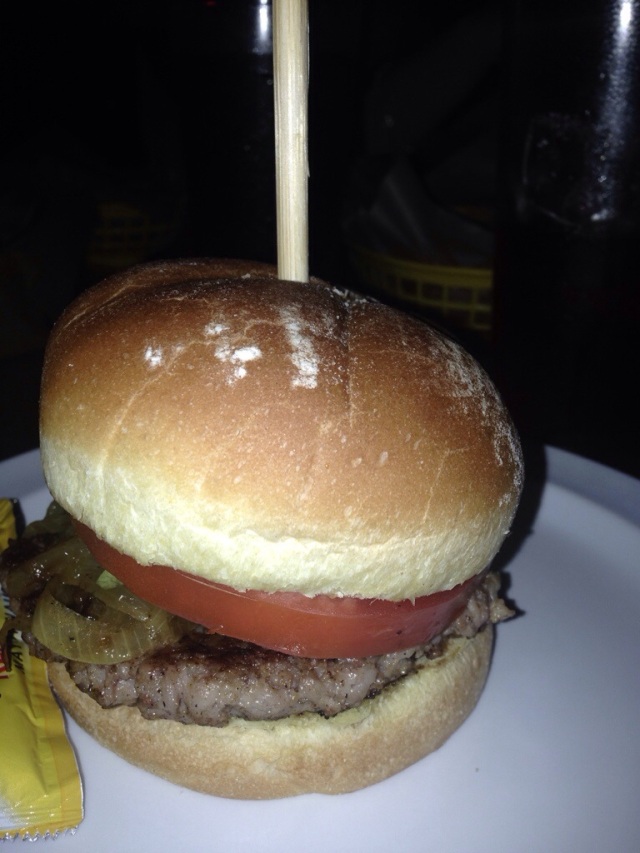 Made of fresh house ground pork, this quarter pound patty was served on an egg bun, smothered in grilled onions, with a piece of tomato and lettuce on top, with a a small corndog stick, skewering it together.  It was okay, but I don’t see pork burgers giving hamburgers a run for the money in the long term – they just don’t have the flavor.

Condiment choices on the table were simple ketchup, mustard, salt-and-pepper and their own house mustard sauce.  I didn’t make a foray into the house mustard sauce, as everyone seemed to think it might have horseradish – which killed the sauce for me.  For what it’s worth, on the way home we discussed our least favorite foods and, in case you’re curious, horseradish did make it into my top five.

To the centerpiece of the meal – the corndogs.  As I said, I had the Fryinstein, in jalapeno pepper batter.  Honestly, I have a soft spot in my heart for corndogs – they remind me of being a kid.  And occasionally you just need one.  I’ll say, without a doubt, this was one of the best corndogs I’ve ever had.  Of the three half dogs inside, the all-beef frank was, by far, my favorite.  Next time, and there will be a next time, I’ll just go with the corndogula like Jo had.  Except I’ll probably have two.

You may note that there’s no picture of just the corndog (you can see them on the table above). The reason is very simple – no matter what angle I took a picture from, it didn’t look like an appropriate picture for a family publication.

I’ve already recommended this to my daughters and to some of their friends.  And to my lawyer.  And to the leader of our small group.  It’s a fun spot and the prices are very fair.