January 13, 2014 · by willoughbyandy · in Duluth / Lawrenceville, Everything Else, Georgia · 1 Comment 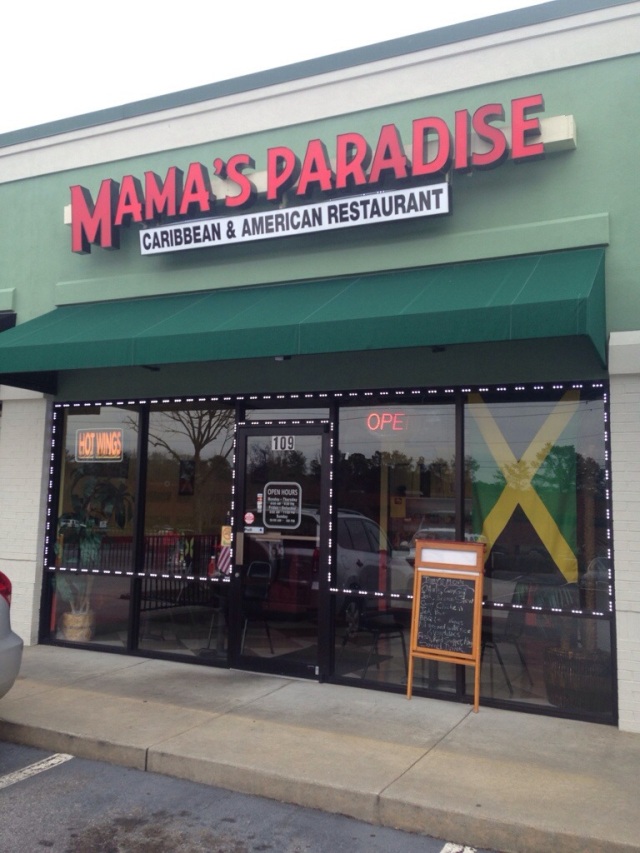 In the perpetual hunt for something new and good near the office, I drove just south of 120 on Satellite to see what was happening in that strip mall. I found that there is a new Indian street food place that is opening soon (Currylicious – love that name) next door to a place that I’d never seen, Mama’s Paradise.  Mama’s Paradise is serving up tasty traditional Caribbean fare, in a store front.

Walking in the front doors, there’s a service window at the right and tables to the left.

The menu is standard Caribbean dishes – chicken, goat and fish  (served in a variety of ways) and oxtails, along with white rice or rice and peas and steamed vegetables or cabbage.  They have no soda fountain, but they do have a cooler full of drinks, including many Caribbean sodas.  While I was waiting for them to fix my plate – dipped from giant pots on a series of stoves, as it is in most every Jamaican restaurant that I’ve ever been to – two young ladies came in.  They were students at a local school and one was, apparently, a regular, based on her comments – I gathered that when one said to the other that she felt like she was cheating on her “regular” spot.  I asked about the food and the more outspoken one said that she didn’t eat beef, but the chicken dishes were all good.  I ordered a beef patty,

which was okay, not terribly fresh.  I imagine that Monday is probably the worst day to judge the typical freshness of their patties.  The filling was a little more “mushy” (less texture, smoother) than I’m used to, but it was okay. 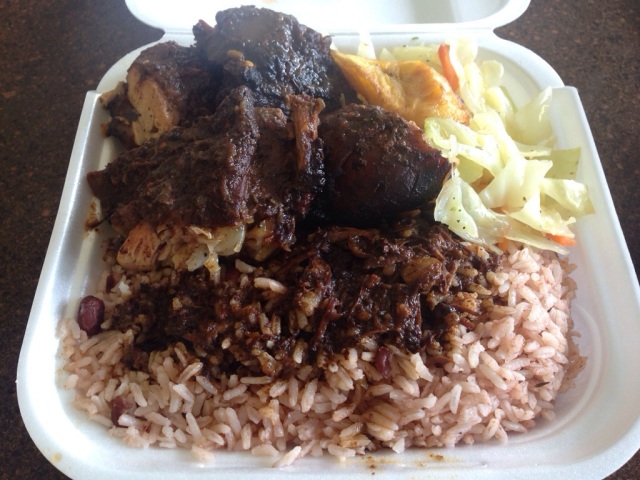 with rice and peas, steamed cabbage and plantain.  This was the “mini” size – they also have a small and large size – and this was plenty of food for lunch.  The jerk chicken was good, but not terribly spicy (the young lady at the counter told me that it was her third favorite, because it was the third spiciest – I might have to try one of the other two).  The rice and peas were outstanding – wonderfully mixed, served hot, slightly moist and spicy – and encouraged me make to plans to go back and try one of the spicier dishes.