I’m going to guess that fifty or more times, in the past six years, I’ve driven by the Olympic Flame.  And on nearly every one of those occasions, it has been closed.  But I had been intrigued by the sign – “You need to eat.  We need the money.”  Then a month or so ago, in a discussion with a friend about yellowjacket hot dogs (What?  You don’t regularly discuss chili dogs with your friends?  Who are you?), he mentioned that he thought the Olympic Flame did them better than anyone.  And then he noted that they were open on Saturday, which contradicts the information on their web site.  Turns out, he was right.

With a plan to meet some friends and play old-time music in midtown, I figured I’d swing by and see if I agreed with his assessment.  The name is misleading, as it predates the Atlanta games by more than two decades, coming from the owners Greek heritage, as opposed to the Atlanta Olympics.

As I walked in, I was struck by the resemblance to a 1970s Dairy Queen – right down to the floor, itself.  As I stepped up to the counter, an elderly woman (who I later determined to be Maria) walked out of the kitchen, sat in a seat by the register and asked me what I wanted.  I told her that I was searching for a great yellowjacket hot dog and she responded, “Everybody says, the Varsity has the name. But you have the chili dogs.”

After ordering, I stepped away from the counter and waited for them to the call my name? My number? I didn’t give my name and they didn’t give me a number, but I guess they knew who I was, as I was the only person in the restaurant waiting for food.  As I waited, I was struck by the overall cleanliness of the place and noticed that they had scored a 100 on the most recent health department inspection.  When I stepped into the restroom to wash my hands, I was shocked at how nice it was – slate walls and floors and very clean.  It  as was a big surprise, based on what you would expect from the street.  Then, my order came up. 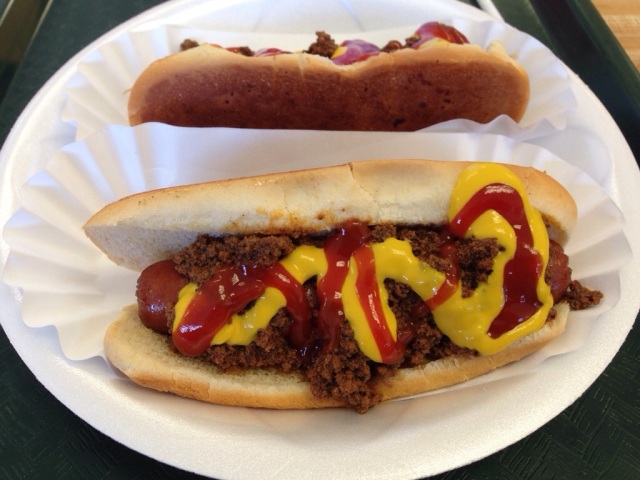 I took the first bite of chili dog, and tasted all the spices and the mustard, which was a little bit heavy.  I quickly devoured both of them, stopping only to get more catchup to dip them in.  The chili dogs were good, but I still prefer those from Martin’s or Fred’s Barbecue House.

Next up Yellow Jacket Hotdogs, in Ellenwood.  But not this day.  Instead I went and played old-time music outside and nearly froze my fingertips off.