February 15, 2014 · by willoughbyandy · in Georgia, Midtown, Sandwiches · Leave a comment 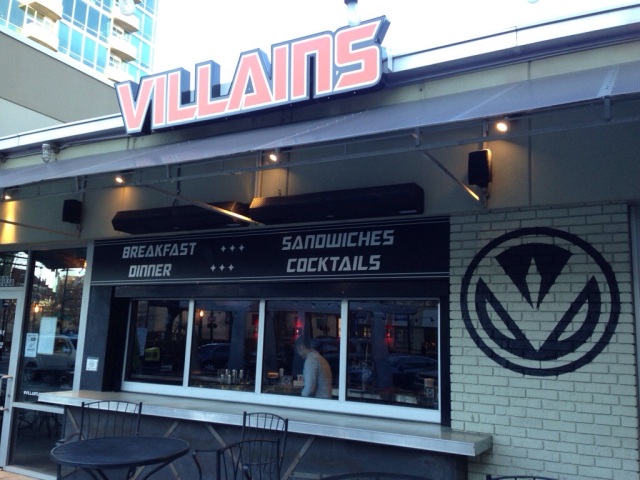 Leaving downtown and looking for someplace to eat, I consulted “the list” and remembered that I was very close to Villains Wicked Heroes.  The less than year-old entry to the Atlanta food scene from the folks behind Grindhouse Killer Burgers (along with others formally at Flip and HD1), Villains is a take on the neighborhood sandwich shop.  With the evil twist that every sandwich is named after a super villain of some shape, form or fashion.   Located in the former Little Azio’s, you’d never guess what it was before as it is now designed to resemble a super villain’s lair, in an abandoned subway station, with one giant wall covered with a chalkboard chock full nefarious plans. 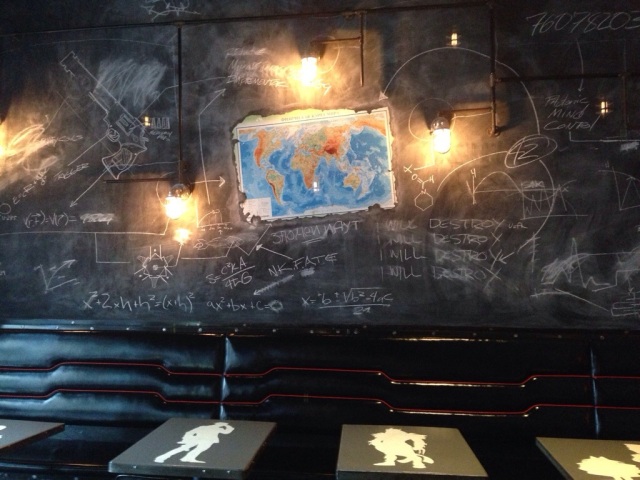 There’s a large crescent-shaped bar – with the back against the exterior wall (you can see the bartender in the photo at the top), two high top communal tables, a banquette wall and a couple of booths.  And they also have a good bit of outside seating.  The bar seemed to have a quite a selection of beers and some interesting “Evil Potions” (their house-created mixed drinks) for a “sandwich shop”.

After looking at the menu, and deciding that carry-out would work, I chose the Hans Gruber (the bad guy from Die Hard).  While waiting, I wandered around and, in the process, got a huge kick out of the signs on the bathroom doors.  Sometimes it’s hard to determine, based on whatever odd analogy they’ve chosen, which door to enter. And it was pretty simple to determine which one was the womens’ room – 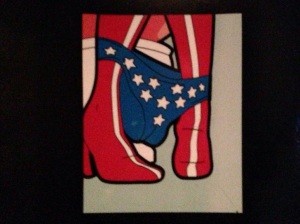 And, when you turned around, the mens’ room had Superman picking his nose.  After about fifteen minutes, my order arrived and I hit the road.  (Since I was in fifteen minute parking, that was seredipitous timing.)  I opened my Hans Gruber (a crispy pork schnitzel hero, with sauteed sage apples, bacon and herb mayo) 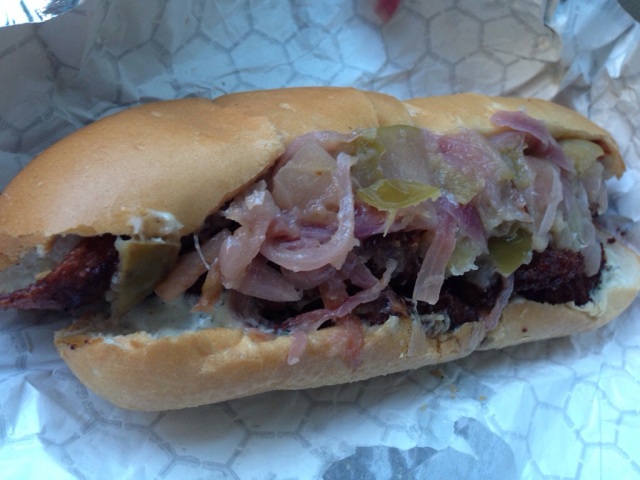 and I was shocked by the onions.  There weren’t any onions in the description!  I went back to the menu to look and saw that there were, indeed, no onions listed and was confused.  Then I took a bite – what I thought were onions were the apples.  Interesting. 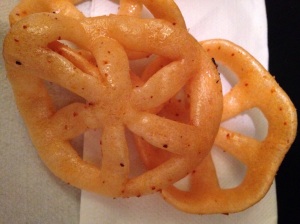 The sandwiches are served on rolls they source from a German baker in Lawrenceville and were all served with a side (I chose the pasta) and all came with an order of Disco Volante – salty puffed wheat pinwheels, like vegetable chicarrones, that were really heavy on lime.

Was it the best sandwich I’ve ever eaten?  No, but not bad.  I’d definitely be willing to give it a try again and have something different.  While I was waiting, I did notice that they’re starting some type of pop-up dining on Monday nights – for the next three weeks it is Puerto Rican street food.