Housed in the old Atlanta and West Point railroad station, I have seen H Harper Station several times as we headed off the Glenwood Avenue exit toward Memorial over the last couple of years.   And I remember having read about them in several different magazines over the last year, being particularly intrigued by their Kentucky Derby party this year.  Today, when we were looking for brunch, I pulled up their menu, discussed the options with my co-pilot and we were eastbound and down, loaded up and trucking. 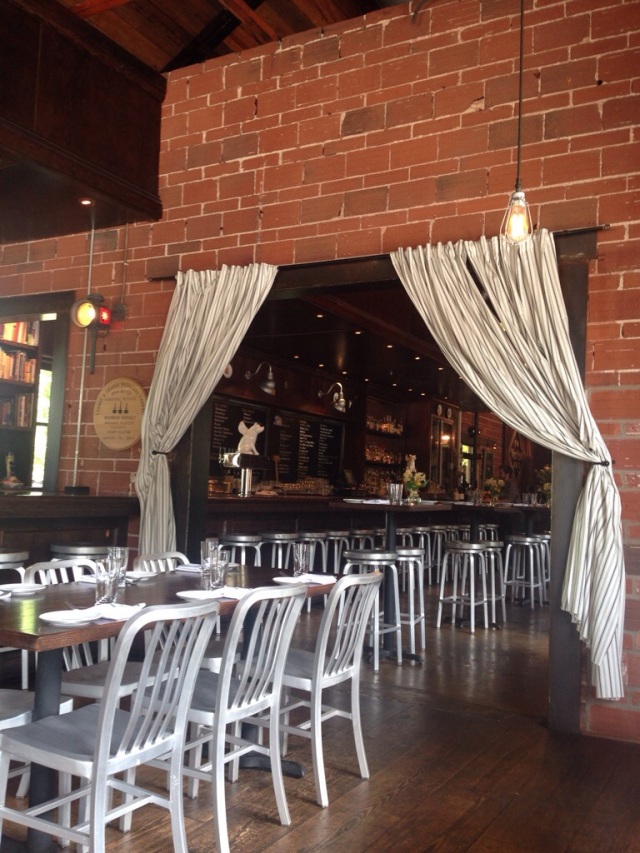 We were seated at the Memorial Drive end of the station in a fairly empty restaurant.  Our server was very pleasant and we ordered the “cathead’ biscuits for a starter and were warned by the waiter that they had changed from one large biscuit to two smaller biscuits a while back.  After later conversation, we learned that they also have changed the recipe.

“Kitten head” biscuits would have been more appropriate (and more graphic) description, as they are the size of the Pillsbury Grands biscuits that you buy in the frozen food section of a grocery store.  And they look a lot, and taste a lot, like them, too.  They were definitely nothing to write home about.

Jo ordered the omelette of the day – grilled eggplant, and mushrooms, with a tomato relish,

with their garlic-herb tater tots as the saide.  She said that the grilled vegetables in the omelette were an different take and quite tasty as well.   I also had the tots, and they were heavy on the garlic and herbs and, otherwise, appeared to be straight from an Ore-Ida bag.

Yes, bacon did make this burger better.  They don’t say on the menu that there are double patties, but I gathered that when I asked for the burger medium and he said that they were served medium well, due to the thinness.  It was a good, juicy burger.  But we were, overall, underwhelmed by the food.

The reviews on the walls by the restrooms reminded me of what I’ve read about Harper Station.  Every positive comment on the wall (and almost all in the “Press” section of their website) was about the cocktails they serve – and those get raves.  Sadly, the food is not a hidden gem.  It’s perfectly fine, but the star, according to everyone else, is behind the bar, not in the kitchen.