When the Trip Advisor article proclaiming Georgia the new barbecue capital came out earlier this year, there were three places listed in the state that I had never heard of.  I made note of all three, and knocked one off the list the last time we were in the north Georgia mountains.  I saw that Wiley’s Championship Barbecue was in Savannah, and figured that we’d tackle it the next time we visited our oldest daughter.  Today was the day – we left home a little after 8:00 and got to her house shortly after noon.  After greetings and “puppy love”, we headed to lunch.

Wiley McCrary and his wife Janet, have been smoking the competitive barbecue circuit for close to thirty years and had a catering business in Atlanta for more than two decades.  But they packed it up and moved to the Georgia coast, opening this storefront in 2008.  They are located on US80, on the way to Tybee Island from downtown Savannah, located in a strip mall, near the intersection of US80 and Islands Parkway.  We arrived towards the end of the lunch shift and were seated quickly. We looked at the menu and specials and talked with the rotating servers, ultimately placing our order. 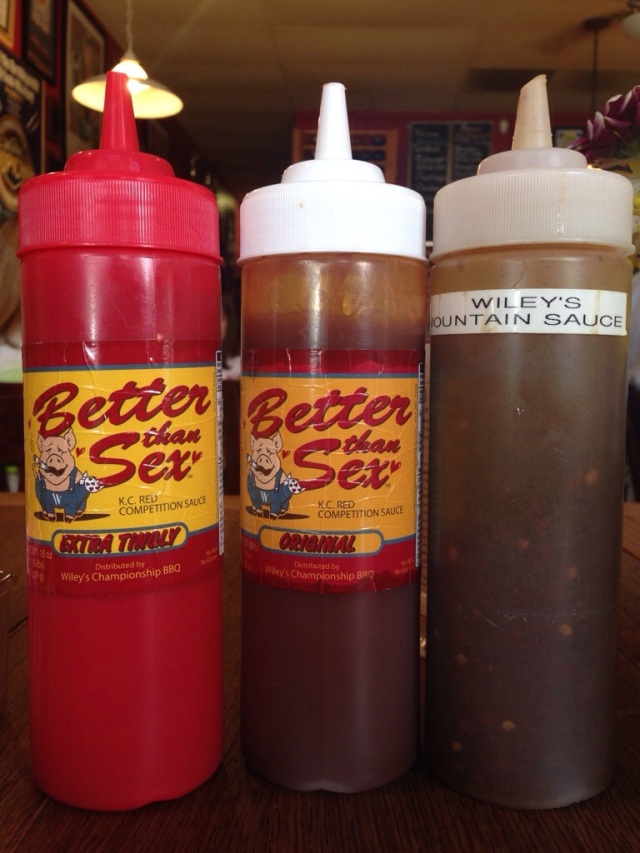 While we waited, I sampled the three sauces:

I tried to buy a bottle of the Mountain Sauce to take home, but they were still in the production and bottling process on that one, and I was concerned about taking a 16 oz. carry out container home, so I got a bottle of their Better Than Sex sauce instead.  (For the record, it isn’t.  But it is dang good barbecue sauce.)

Jo ordered the burnt ends with slaw and their “best beans on earth “, while our daughter had a quarter chicken plate with fries and the same mac-n- cheese that I had with my meal. 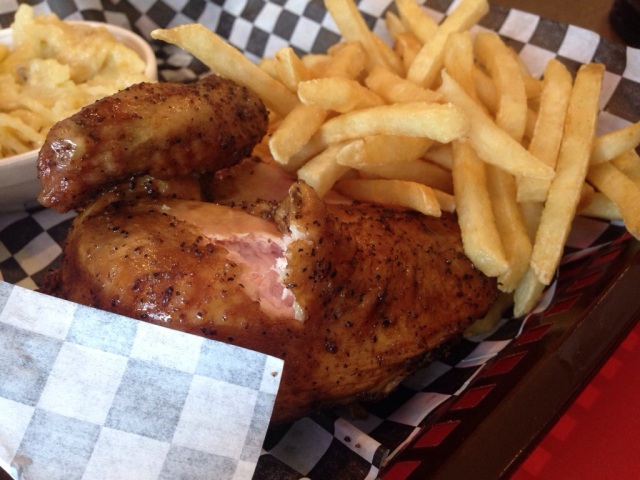 I ordered a three meat combo plate with burnt ends, brisket and St Louis style (flat rectangular cut) ribs, with mac-n-cheese and Burnswick stew.  I asked for the meat “dry”, but they warned that the burnt ends were prepared and served in sauce.  And the ribs had a sauce rub on them as well. 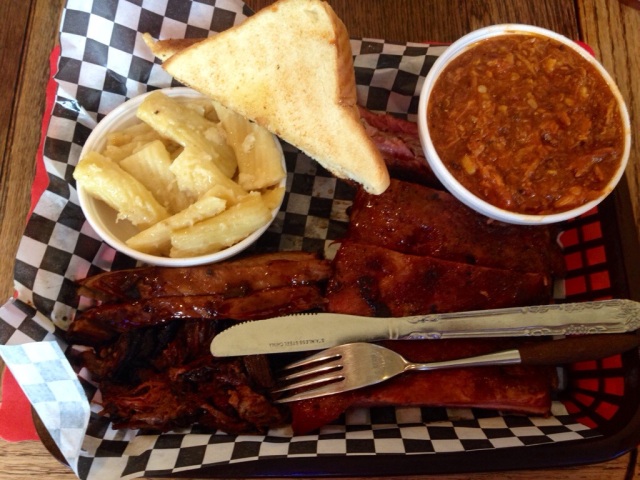 The burnt ends were pretty good, but the sauce that they were served in didn’t seem to be any of the three on the table.   The brisket was good, as well, not too fatty and fairly moist.  The ribs were the standout meat for me,

with a beautiful smoke ring, very meaty and smoky  tasting.  The meat pulled away from the bone with just the right “tug”.  I’ll be having those on a return visit.  The sauces complemented the meats well, particularly the Mountain Sauce on the ribs.  The Brunswick stew was thick, slightly sweet and very meaty.

As we get to Savannah fairly frequently, we’ll definitely make a return visit.  And I’d be fine with getting nothing more than a slab of ribs.  And some of that Mountain Sauce….