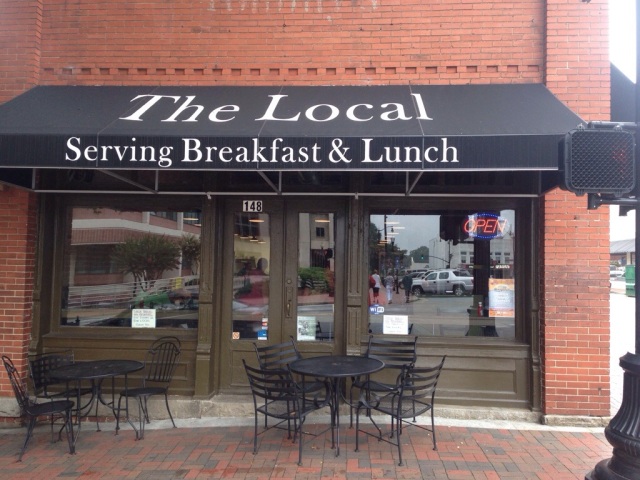 Today’s adventure began with errand running in Kennesaw, which led to being in the Marietta area for lunch.  I remembered that I had seen a place on the complete opposite corner of the Square from the Butcher and the Baker that served “Breakfast and Lunch”, that I wanted to try, but I couldn’t remember the name.  Driving into that corner of the Square, we saw The Local and began the arduous task of attempting to find a parking spot.

The appetizer for today’s meal was a special serving of jackass.  This all related to a family walking “WITH A BABY” in the beginning of a crosswalk, when I crossed the the other end of the crosswalk to park.  I was making a left on a green light, with plenty of space  This was followed by the fact they wanted to have a conversation (about us) amongst themselves (loudly) about it, after (in a classic passive-aggressive move).  Always having missed out on the first part of being passive-aggressive, I was more than willing to have a confrontation.  Which we did and which culminated with a 60+ year old man stinking out his tongue and phhhhffft-ing me before walking away (he actually had spittle in his grey goatee)…

Had there been any possibility of hitting them, or even coming close, I would have stopped.  And how the heck does walking “WITH A BABY” (which seemed to be the point being made most vociferously) make any situation require more caution, on the part of anyone else, than walking without a baby?  People slay me.  An inauspicious start.

After crossing the crosswalk ourselves, without incident I might add, we walked in the double doors and took a look around.  Although there aren’t signs instructing such, it’s a walk-up-to-the-counter-and-order kind of place, so we grabbed a couple of menus, made up our minds and I went to the counter while my beloved grabbed a table.  When you order, you give your name and they bring your order to you.  The delivery mechanism, today, was the guy in the black shirt (above), who seemed to look for the number of people waiting for food that matched the number of meals in his hands, resorting to calling a name only when he couldn’t figure it out.

The menu says “buttermilk-brined all natural local chicken” which I assumed was fried chicken pieces (a breast and something), not filets (we see what happens when I assume), so I was a bit surprised when it arrived as two fried filets.  It was good chicken, but kind of stringy and not terribly moist.  There was a blurb on the menu that this was Marietta’s best fried chicken and wonder with whom the competition was held.  The mac-n-cheese was fairly generic, but the fries were fresh cut and very good.  Had they been fried to a slightly more crispy consistency, they would have been excellent.

The love of my life ordered the chicken burger,

which arrived as two thin ground chicken patties (a great way to guarantee the chicken is done throughout), which she had with a side salad.  The chicken was hot, and well seasoned – in fact the only complaint with this sandwich was the bun, which was served cold.   Our oldest was in town this weekend and she ordered the Local burger, 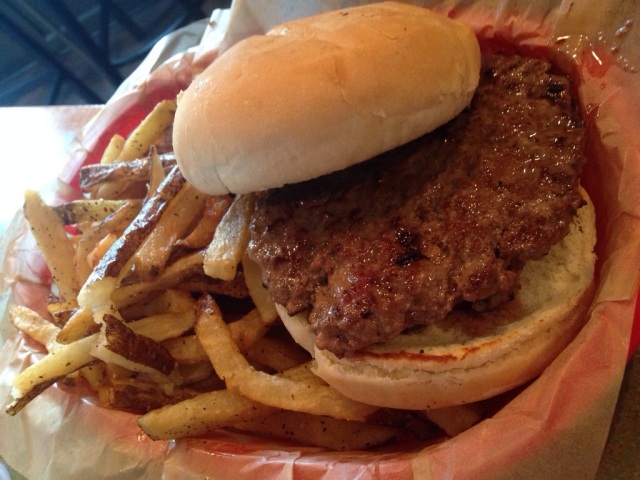 with fries.  The burger, like the chicken burger, was made of two thin patties which had a good flavor to them.

They had a consistent flow of people while we were there and they appear to do a good business.  I’ll have to keep them in mind for breakfast when I’m in that area.