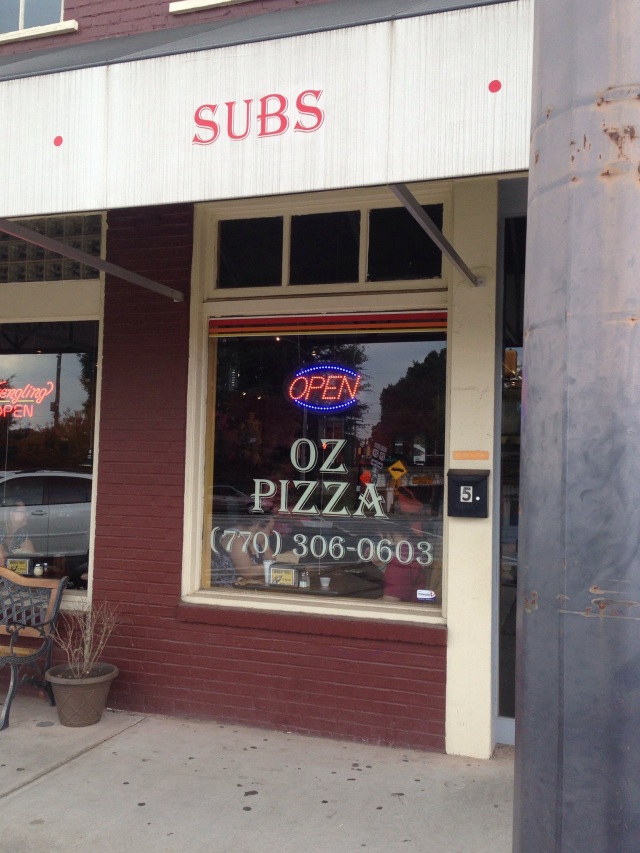 On this rainy Saturday evening, we headed down to Fairburn to meet up with some friends to see “110 in the Shade” at the theater downtown.  They had picked up the tickets for a group of ten of us and we said that we’d meet at Oz Pizza for dinner before the show.  We arrived shortly ahead of the rest of them and wandered around the old main street, only to find that everything had closed up an hour before we got there.

Oz is a local chain that has been around since 1997, starting with a location in East Point, expanding to Fairburn and to a third location down in the Tributary area of Douglasville.  It’s a walk in and order before you take a seat kind of place and the sign on the cooler tickled me.  If you can’t read it:

The room is open and loud and Oz seems to promote a great sense of community – hosting trivia and fundraiser nights for local churches, schools, sports teams and other groups.

Jo and I always have a hard time deciding on a pizza as I am the much more carnivorous half of us, and I had figured we’d each end up ordering a couple of made-to-order slices.   But fortune prevailed and one of the couples we were meeting had similar tastes and the ladies shared one pie and the men another. 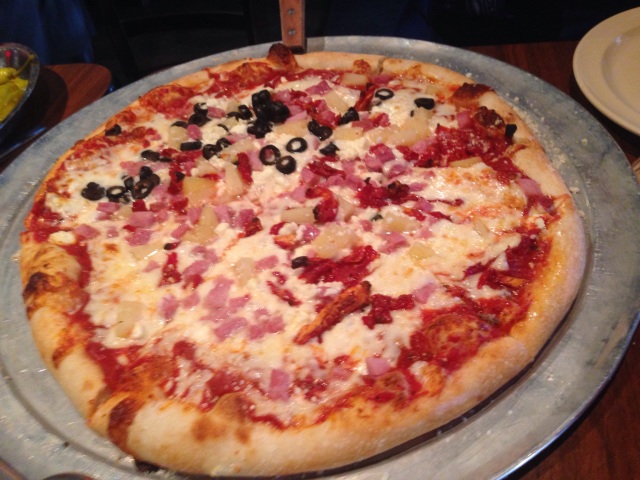 The ladies ordered an Oz Special – Canadian bacon, pineapple, feta cheese and sun-dried tomatoes, with black olives added to one half.  The gents decided on a Hercules – pepperoni, Italian sausage, meatballs, Canadian bacon and extra mozzarella cheese, both large (16″) pies.

A large pizza was plenty for the two of us and there were two slices left from the ladies pizza – there was no shortage of food.  The tomato sauce was slightly sweet (the menu said that they use fresh plum tomatoes to make the sauce daily) and the dough was on the thick side, particularly at the outer edge.

It was better than fast food pizza, but I don’t know that I’d make the drive to Fairburn just to eat there again.