Going back to one of my earliest lists (101 Favorite Restaurants, Atlanta Magazine, August, 2006) led us to today’s dining destination, Penang Malaysian Cuisine.  Heading north on Buford Highway from downtown, I originally thought we were going to be able to knock off two spots in one stop, as they both were listed as being in Orient Center.  When we arrived, Orient Center was a strip mall, not a shopping center, so Mini Hot Pots will have to wait for another day.  We arrived around 1:00 and the place was fairly empty, although a party of ten arrived about half way through our meal and really livened up the place.  The emptiness gave us a chance to get some good shots of the interior (down below the UrbanSpoon link).

The server started us out with a small dish – I assumed it was some type of picked vegetable, which led me away from tasting it until something to drink showed up.  But I finally asked and found that it was potatoes in chili sauce.  The potatoes looked as if they had been sliced up for hash browns and were then mixed with small chiles and soaked in the chile oil.  This was very good – although kind of challenging to eat with a fork.

I couldn’t figure out what to order, as the menu was five pages of descriptions and a bit overwhelming.  Jo asked the server and we went with a couple of her recommendations (one for a starter and one for my meal).  We started with Roti Canai – according to the menu, “It’s the all-time favorite Malaysian crispy Indian-style pancake. Served with curry chicken potato sauce”. 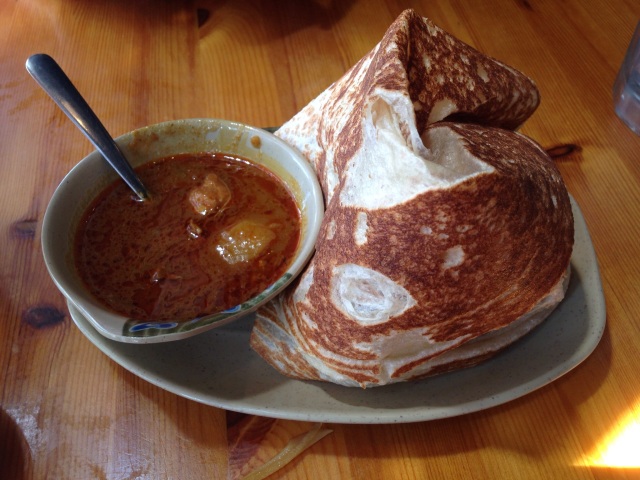 I know that at the Indian place near my office, roti is a whole wheat type of naan, but this “pancake” was cooked like a crepe on a flat griddle.  It arrived, hot and crispy, with the curry chicken potato sauce in a small bowl next to it.  The sauce was rich and spicy, very flavorful and made for a perfect accompaniment to the pancake.

Jo ordered a lemongrass chicken, which arrived considerably after my food, and, unfortunately, was not served hot.  We mentioned this to the server and she took it away and it came back warmer, but I think they had just “nuked” it.

The dish was good, but the flavor was much more redolent of coconut than it was of lemon.   Each dish was served with a side of white rice.   I ordered Sarang Burong – shaped fried taro stuffed with chicken, shrimp, snow peas, corn and black mushrooms, topped with cashew nuts, according to the menu.

When it arrived, there was also broccoli, peppers and scallops in the dish.  The fried taro was shaped into a ring, using the plate to serve as the bottom of the bowl.  Jo often gets taro yogurt at Yoforia, which is a pale purple color, so we knew that taro is a root vegetable that’s eaten all over the world, except in the continental US.  What I didn’t know was that taro is actually the key ingredient in “Poi” (the Hawaiian paste that Barney kept asking Fred to pass in  that classic Flintstone episode), and when I read deeper in the wiki about taro, you may have it growing in your back yard – the ornamental plant name for it is “Elephant Ears”.

Once you cracked the thinly fried crust, the taro was the purple of Jo’s yogurt and tasty – slightly nutty and very good.  The dish itself was good, resembling moo goo gai pan with more flavor, but it was, overall, a little “bland” for me as I prefer more spice in my food.  If we decide to go back, I’ll look for something with the little red pepper next to the name.  The only downside was, like so many restaurants along that stretch of Buford Highway, it looked they needed to “clean up” – there were stacks of carry-out bags by the register, the owner had been paying bills and reading mail at the first table.  It wasn’t “dirty” – it was just very “messy”. 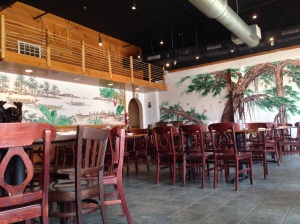