Tonight’s challenge:  show up without a reservation and convince the maitre ‘d that you can eat and clear his only empty table before a 7:15 reservation.  That’s exactly what happened when we arrived at Miso Isakaya.  We succeeded on both counts – on getting the table, and on getting out by 6:45.   After the fantastic meal at Le Fat the week before, I was excited to try Guy Wong’s original restaurant (FYI – an isakaya is a Japanese drinking establishment that serves food to accompany the drinks).

This is the view from the front window toward the sushi bar – you can see that the restaurant is not very deep.

The restaurant was fairly empty, even though they were booked, apparently because the reservations were for later as they were nearly full when we left.  The focus of the menu is on tapas style plates, along with sushi / sashimi / nigiri, salads, larger plates and sake.   We ordered sashimi and a California roll to start, along with a kale salad with coconut and almond brittle.

The coconut added to the dish considerably.  Of the kale salad, I asked, “Is it good?”  “Watch it disappear!” was the reply.  It did – every single bite.

The sashimi and roll arrived together (from left to right – tuna / yellowtail / salmon / white tuna) and all disappeared fairly quickly as well.  We ordered everything together, but our server did a fantastic job of sequencing our food so that we never had an empty table or food waiting in the “on deck” circle.   We followed the starters with beef teriyaki, 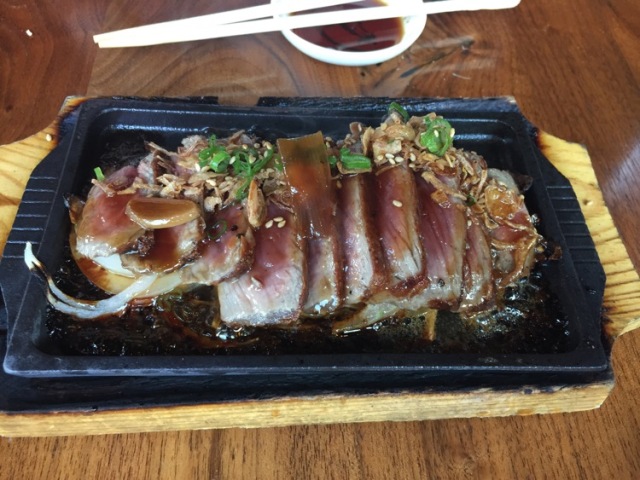 which arrived, steaming and popping, on an iron skillet, atop onions.  One of the tables next to us, turned a plate upside down and placed it on top of the beef – this appeared to be a great idea to continue the cooking beyond medium rare.  We had an extra side of rice with this dish, which we shared.   It was good, but next time I’ll order the sizzling short ribs instead – they looked even better as they passed our table.

We finished with a ramen bowl – dan dan mazamen:

Ramen, with minced pork, a 7-minute egg and cucumber, floating in spicy Szechuan oil (this is the same house-made chili oil that I loved at Le Fat).  I lamented to our server the lack of a good ramen house in the city (my favorite is Umaido in Suwanee), without realizing that Guy is planning a ramen stand to open in Ponce City Market, Ton Ton, which will be serving this dish.  One more reason to hope that the Market will quit being postponed and eventually open.