We arrived in our destination for the evening, Oklahoma City, without a definitive dinner plan.  As we were checking into the hotel, we were talking with one of the ladies behind the reception desk about our barbecue and shopping based road trip.  When I asked her about the best barbecue in OKC, she didn’t hesitate to say “Leo’s!”   That was a solid vote, so we threw our stuff into the room, came back down and plugged the address into the GPS.   We were slightly east of downtown when we pulled up to the building above.

We ordered at the counter – to the right of the picture above and behind the open sign in the window in the top picture – and I settled on Leo’s Special (2 ribs, 2 links, brisket and bologna) with a side of fries.  The photo above is of the brick heating pit in the middle of the restaurant.  When he pulled out our brisket, the pitmaster was cleaver-chopping it with a fervor you usually only see in slasher movies.

I’m a sucker for barbecued bologna, which seems to be something of an Oklahoma oddity.  I grew up on bologna (mostly Oscar-Meyer on white bread with Kraft American cheese), so I tend to order it whenever it’s available.   And the bologna was good, although not very smoky, and the brisket was very tasty – it may have been the best thing on the plate.  And take a look at the smoke ring on that rib!

The ribs were very good.  In fact, the sausages were the weak “link” in this meal.  There were two sauces – once mostly sweet and the other hot.   The sweet sauce, with a little touch of the heat went very well on the brisket and the bologna.  What I didn’t know was that each dinner was served with “Leo’s World Famous Strawberry-Banana Cake”. 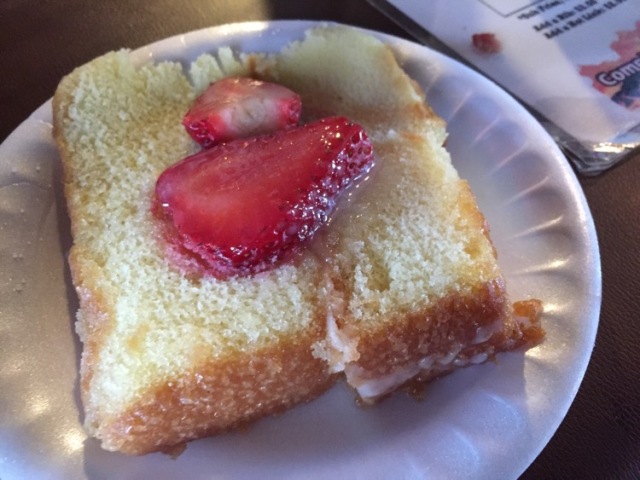 I didn’t realize that strawberry-banana cake was my favorite cake, but I think it may be now.  What you likely can’t tell from this photo is that it is a lemon cake (with the flavor of bananas in the mix), with an icing much like the white sugar icing we see on bundt cakes, here in the South.  The layer between the two cake layers is banana and it was topped with sliced, sugared strawberries.  It is very possible that I devoured both slices that were brought to our table.

As we were about to leave, I saw this cool map on the wall,

although it may actually have been a place mat they had framed.  It was produced by Virgil’s Home Cookin’ / Real Barbecue (barbecue in New York City??) in 19-who-knows-when.  Looking it over, I saw that one of our planned stops (in Arkansas) was on the list.  And then I saw that of the two listed in Georgia, one closed a couple of years back and I had never heard of the other (Aleck’s Barbecue Heaven – this appears to possibly now be a barbecue sauce company now with a phone number with non-descript voice mail and a webpage that is partially built).  I’ll have to do a little more investigation into the places listed.   And if you know anything about this map, please let me know.