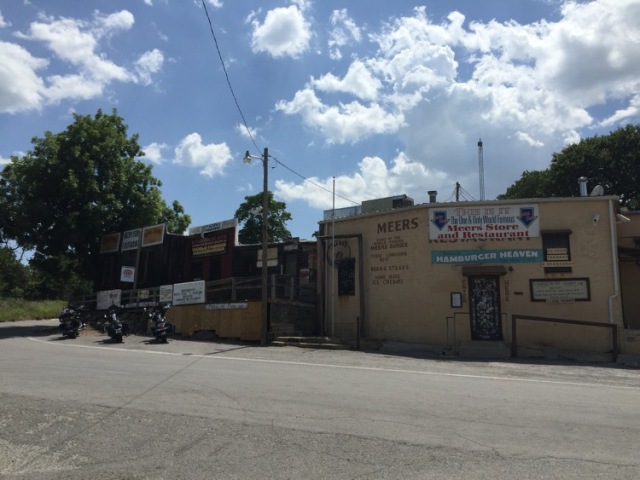 Another stop from Hamburger America was calling as we headed east from Amarillo toward Oklahoma City.  One of the focal points of this road trip was back roads, and, boy howdy, did we find them on the way to Meers, Oklahoma. 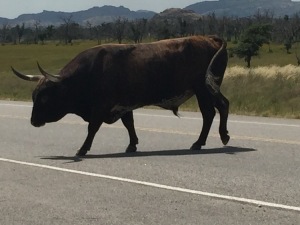 We followed the GPS on my phone, through a series of small towns, when we found ourselves entering the Wichita Mountains Wildlife Preserve, with signs warning us to watch for free-roaming buffalo and antelope.  We saw a couple of bison on the side of the road, grazing, but actually found ourselves face to face with a Texas longhorn that was crossing the road right by where we were parked.  Just wait – we’ll get revenge on his species….

Meers Restaurant and Store is located in the town of Meers, OK (near Lawton, if you’re looking at a map), which was once a mining town, and the beginnings of this rambling set of buildings.  They are cash only, but in case you’re not carrying  any, I think that there may be an ATM.

We each ordered regular burgers, as opposed to the larger Meersburger (or the much larger Seismic burger) and they arrived in these metal trays, which I’m sure are meant to be mining pans, in retrospective view.

The burgers were fine (nothing to write home about – yet, here I am doing it) and the fries were generic.  And both orders of fries were ice cold – we subsequently asked for one order to share.   But, while we were heading to our table, my dear wife saw someone having the peach cobbler.   And the ice cream  on top of it.  We ordered one of those to share…

It’s hard to tell from this picture, but the cobbler was served in a giant plastic cereal bowl, with almost as much ice cream, as there was cobbler, upside down on the pie.   The pie was warm and the ice cream was homemade.   We devoured the pie – it more than made up for the mediocre burger and fries.