I discovered  the Crafty Hog in an article earlier this year in the Atlanta Business Chronicle about new barbecue places in the metro and made a note of a new place on the west side.  Then we actually drove by it about a month ago, but not near time for food.  When is not a time for food?  That’s a great question, and I don’t really know.  But, that day, we weren’t going to eat there.  Today, we were coming back from Buckhead and looking for lunch.  I decided while we were shopping  that this was the perfect chance to get a burger at OK Cafe.  We pulled up and saw the construction and then Jo reminded me about the fire….

I had been planning on this burger for the last two hours and was at a lunch loss.  My dear wife said “just pick another place”, which I heard as “let’s eat barbecue!”  We headed up Paces Ferry and wound our way to Concord Road.

Coming inside the old Howard’s Delicatessen building (a true Smyrna institution), it didn’t look like as much like a barbecue joint as it did a sports bar.  And outside they had two fenced patios with bocce, cornhole and horseshoes, plus massive amounts of parking.  They can hold a crowd, but we were there mid-afternoon and there was virtually no one in the place – one table with patrons and a few folks in the bar area around the corner.  We waited a few minutes and were seated in a booth against the wall and started perusing the menu.

There are starters, sandwiches and salads and the middle of the menu allows you to build a BBQ plate – you pick your protein to begin with.  There were several choices, that looked interesting – pulled pork, chicken, smoked turkey breast, smoked pastrami, chopped brisket, smokehouse sausage and ribs.  Then you add two sides (hock collards & kale, smoked gouda mac-n-cheese, pork & baked beans, house cut fries, southern potato salad, beer battered onion rings, crispy brussels sprouts, smoke house corn on the cob, fresh green beans or fresh apple coleslaw) and choose your sauce.  That’s where things got weird.  They have four sauces listed, and you choose one with your meal (these are their descriptions):

Then extra sauces are $0.50 each, or you can get a flight of all four for $2.00.  I guess that’s actually a deal, as the menu on the website says that extra sauce is $1.00.  A barbecue place that charges per sauce?

I then asked the server what was freshest off the pit, as I couldn’t decide. “They don’t tell us what they’re bringing inside as they do it.”

An inauspicious start.  Jo ordered one of the daily specials,

the bambino – a half-pound burger with brisket, bacon, pimento cheese and jalapeños.  The pimento cheese was much more like grated cheese with pimentos thrown in, and the sauce was thin and runny, but the brisket was very good and they certainly did not skimp on the jalapeños – we counted eight in the half of the burger that she didn’t box for later.  Aside from the PC, this was a very tasty burger, and a good value at $8.99, including a side.  I chose to build a barbecue plate, and since I had no guidance as to freshness, chose 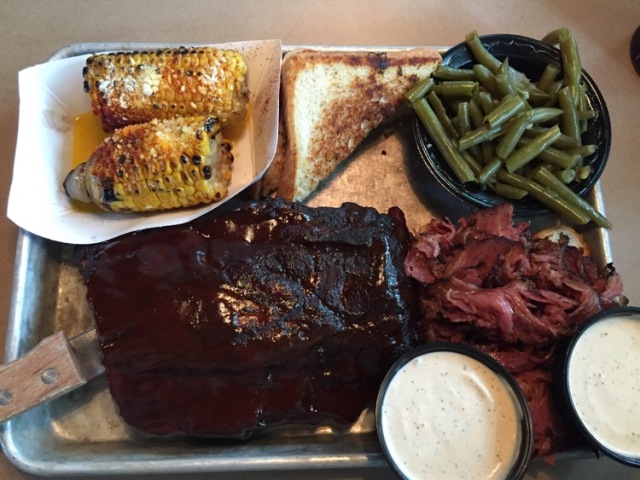 a half rack of ribs and smoked pastrami, with the white sauce and corn and green beans.  The green beans were not cooked southern style (soft and mushy like a grew up with), but were instead somewhere between that and French style (crispy and barely cooked).  The corn was grilled, then topped with cheese and pepper and was fine.   The ribs were very meaty and completely fell off the bone.  I used a knife to split them, but could have eaten the entire half rack with my hands.  Because the sauces were on the side I didn’t think I’d need to order the meat “dry”, so I was somewhat surprised when the rack showed up covered in their Deep South sauce.  A note on the sauces – there were bottles of the Deep South and Hog Wash on the table, so if you ordered extra sauce and one of the sauces was these two those with your meal, you were technically cheating yourself because they were already there.  The smoked pastrami was good – thin sliced and appropriately fatty.  The pastrami, covered in the white barbecue sauce, made for a really nice sandwich.  I’ve become a big white sauce fan in the last couple of years and we’re starting to see more places in the Atlanta area serve it.  The meats were good and the sides were okay, but my combo came in over $22.00, so it was somewhat pricy.  If you’re interested in going, I imagine that it is quite busy on weekend nights, so plan accordingly.