The first time that we attempted to eat at Wall’s BBQ, it was dark and pouring down rain.  And we could not find the restaurant.  You see, it’s on one of the weird non-streets that they have in Savannah.  We kept driving around where our GPS thought it was and never saw it.  You access the “street” by driving down an alley off one of east-west roads.  After crossing a stretch of gravel, we pulled up to the door to find that they were closed because the air conditioning was being repaired.  So, as we were headed to the beach for Labor Day, we tried again.  And, again, it was raining. 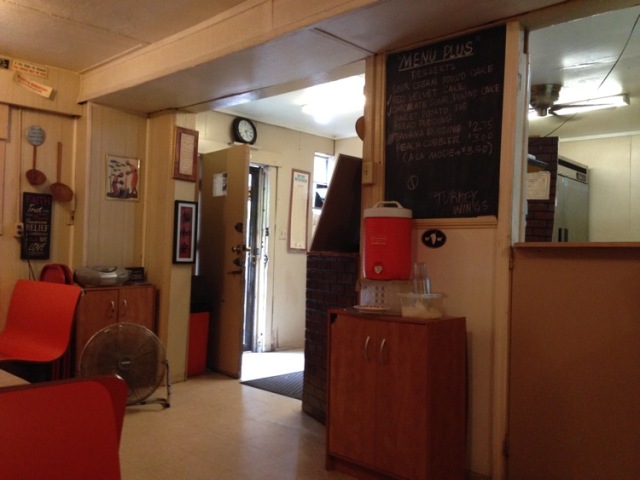 I dropped off my beloved and parked around the corner, donned my rain coat and worked my way back in the entrance, finding a completely empty restaurant.  Originally opening in 1963, they closed on the 4th of July in 2010, and were closed for almost two full years.  I ordered a pork plate, with black eyed peas and macaroni and cheese.

This was an atypical barbecue place in that: a) they focused on table service (even though everything was served on paper plates); and b) they are much better known for their non-barbecue items.  The mac-n-cheese was homemade, very cheesy and hearty.  And these peas had not been prepared in a vegetarian style – there were definitely pork parts in the preparation.  My dear one ordered ribs, candied yams and turnip greens.

Both plates were served with cornbread, and while the ribs were fine, she was raving about the yams and greens.  The sides were definitely stand-outs.  But if it wasn’t about the barbecue, why was I so eager to try this place?  The deviled crab.  I’m not a huge crab fan, but I had read about these in Garden N Gun at least three years and wanted to give them a try.

These are a study in stretching ingredients, adding celery and crackers as filler to make the crab go further.   They’re then baked in small tins (like a 2 inch diameter pie) and served like little fritters.   How were they?  They tasted like crab, mixed with crackers, onions and celery – almost like a stuffing you’d find in a turkey.  Definitely an interesting experience.