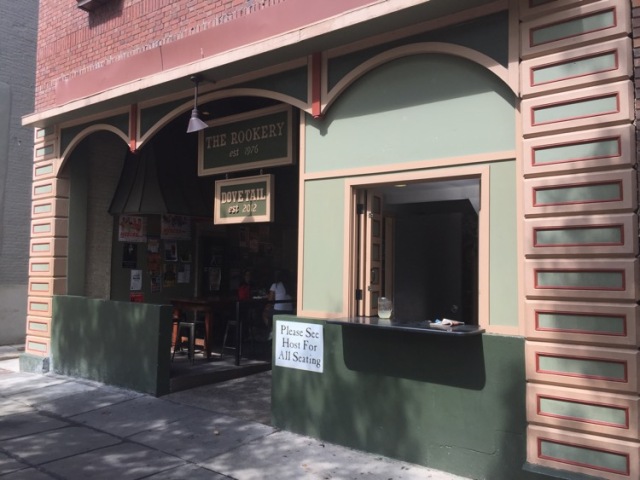 Our official “third child” had been living in Macon for the last couple of years, at grad school and has been telling me that I really needed to go to the Rookery.  Today, as we were heading back to Atlanta from the beach, we rolled into the Heart of Georgia just in time for a late lunch.  We found a place to park around the corner and ran the short block (in the rain) to get a bite.

Open since 1976, they’ve been serving burgers, shakes and beer on Cherry Street to more than a generation of middle Georgians.  There is porch seating, along with some picnic tables out front (he drizzle precluded those).  Inside, there is a large dining room, with a bar at the back and a loft along the right wall, above a row of booths. 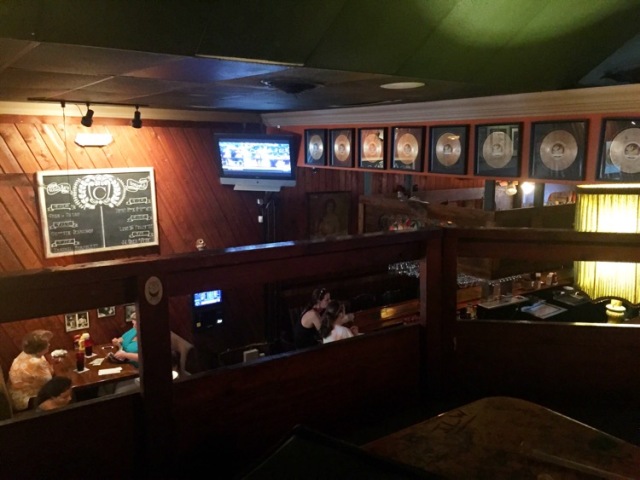 We were seated in the loft – this is the view from the loft towards the back wall.  We debated whether being the server assigned to these tables was a punishment of some sort as they were up and down the stairs constantly.  We started with the spicy pimento cheese dip with house chips.

The chips were thick cut and the jalapenos on the pimento cheese was not just for decoration.   The pimento cheese had a kick to it and we snacked on it, while waiting for our food.   They have a variety of specialty burgers, often named for people.  I’m imagining that the person has eaten there (likely with the Allmans, or Jimmy Carter) and they then made their burger into a standard order.  Jo ordered the Ray Charles burger,

with pepperjack, applewood smoked bacon and guacamole, along with the battered fries.  This was not a cheap lunch – both the battered fries and the grass fed beef were up-charges, adding $4.50 onto an $11  burger.  The fries recall those that our family really enjoys from the Crab Shack on St. Simons Island, and her burger did not disappoint.  I had the Rookery (house) burger –

a double stacked burger, with American cheese, sauteed onion, b&b pickles, mustard, and Coca-Cola ketchup (I held the onions and pickles, as always).  These were both very good burgers – I see why she had been raving about them all along.  They also have a variety of hand-dipped milk shakes which looked really appealing – my love even tried to order the Jimmy Carter (banana ice cream, peanut butter, slice of bacon), but they had run out of the banana ice cream on the holiday weekend.  Now we have to go back.

Since we visited, I recommended a stop at the Rookery to a friend driving through from Atlanta to Savannah.  She told me that it was one of the best burgers she had ever eaten.  I guess that was me paying it forward.