Today, we met the newliest-weds of our kids for a meal at Arepa Mia, in the Sweet Auburn Curb Market (thanks, Roger for the info to allow the correction of the name.  Note: If you enjoy this blog, you ought to check out Roger’s, Friday Date Night).  The kids had been to the Decatur location to have the pabellon arepa (they’re working through a list of their own) and they thought we would enjoy joining them there.

It’s a counter service place, just inside the main doors on the Edgewood Avenue side of the market.  I had never had, nor even heard of, an arepa until today.  Lisa Hernandez, the owner, grew up making arepas with her mother and selling them in a stand on the streets of Venezuela.   When Lisa  came to the US, she wanted to bring her mom’s arepas to a new clientele. 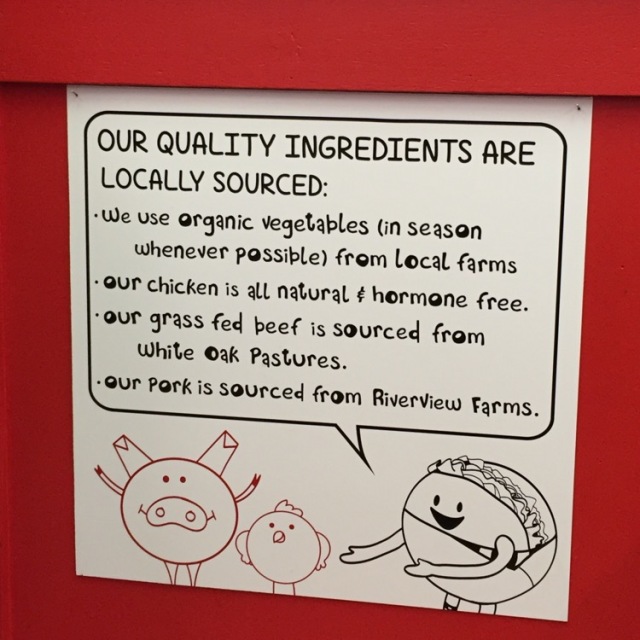 In the course of this pursuit, they attempt to locally source quality ingredients whenever possible.  After we figured out our orders, we grabbed a spot at one of the two long tables (there’s also additional seating in the open area of the market) .   It was then that I noticed the two sauces on the counter.

I love the disclaimer on the second sauce – “you are on your own”.   We started with the Venezuelan black beans, which were served with creme fraiche and a touch of guacamole.  It was hard to judge if they were good or not because they were almost cold.  Very few of these were eaten.

Arepa Mia serves the traditional foods of Venezuela – arepas, cachapas and empanadas.   I was familiar with empanadas, so one of us ordered pernil empanadas (roasted pork with mojo sauce and caramel oxen onions).   These are served in orders of two,

with a cilantro sauce and crema fresca, so we each had one.  This was when I tested the Salsa Marina.  The description was extremely accurate – a couple of drops added plenty of heat.  The empanadas were fine – our daughter had the domino (black beans, fried plantains and queso de ano – a soft white cheese, much like mozzarella) and it appeared to have more flavor than ours.  We also ordered the pabellon  arepa for which they are famous –

shredded beef with fried sweet plantains, organic black beans, and queso de ano.  An arepa is a grilled  corn meal  patty, cooked until crisp on a griddle and sliced in half, then filled, and designed to be eaten like a sandwich or a hamburger.  This is easier said than done.

We added avocado to our arepa and it made for a delicious sandwich.  The flavor mix was phenomenal and a touch of the habanero hot sauce took it over the top.  But eating it was a handful – maybe if we had laid off the added avocado it would have been easier to handle.

At their other location in Decatur, we understand they use real utensils.  With the plastic ones here, not only would the knife not cut the corn patty, the fork bent like it was melting when trying to use it, too.  But if the only complaint about a meal is that I wished I had real silverware,  I shouldn’t really complain at all.