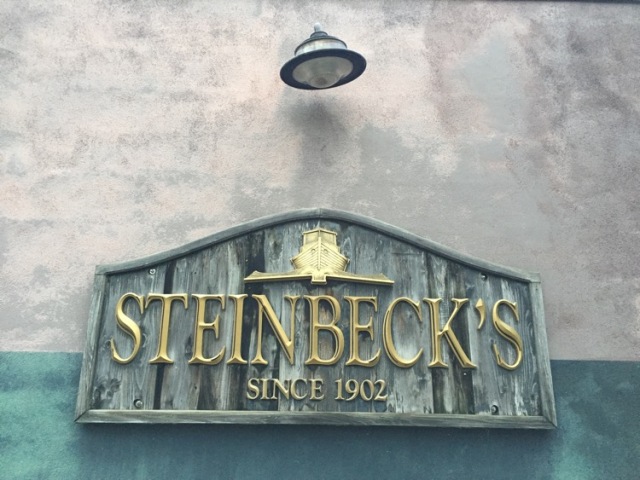 We’ve been working our way through Atlanta Magazine’s list of the twenty best burgers, on and off, since it was published in January.   Tonight, we’re knocking off one of our two remaining places in the top ten, Steinbeck’s Ale House in Oakhurst, tonight.   This selection was based on a combination of location and timing – we were in Buckhead, and looking to eat around 5:00.  Neither of the other two places in the top twenty, in near proximity, opened until 5:30.  Decision made.

Steinbeck’s is a neighborhood bar, in an actual neighborhood. Looking around and listening, we (having driven to the restaurant) were in the distinct minority.  Living in the rural suburbs, the idea of walking to dinner is completely foreign.  While we were eating we talked about how awesome it would be to walk to a place like this for dinner (or the pizza place, or the coffee house or the grocery store or ….), then walk home.  It is, first and foremost, a bar – more than 75% of the two sided placemat of a menu detailed their beer, wine and cocktail selection.  But everyone (at one of the few tables inside, or at one of the outside tables) appeared to have food, too.

We focused on the small menu and, had we not been there for the burger, would have been tempted by the fried chicken sandwich, the “Pimp Fill ‘Eh”.  We both chose the “Double Double”, which the menu described as “Animal Style.  Million Island”

This burger’s inspiration is clearly the West Coast “off-menu” classic from In-n-Out.  The double-double gets its name from having two patties and two slices of cheese.  These were then topped with lettuce, onions – I had mine held – and the Thousand-Island-like sauce and resting on bacon and tomato.  A true Animal-Style burger has the patties smeared with mustard as they cook on the griddle, but I didn’t ask if this one did.  This was. however, one tall burger. Right after I took the picture below, I mashed the burger down, sliced it in half and started to dig in. 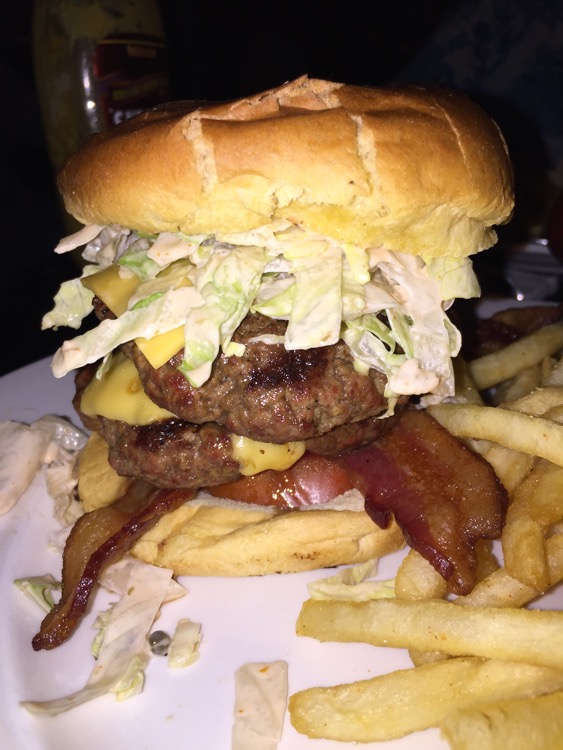 This was definitely the messiest burger that I’ve had in a while.  I can see why this burger made the top-ten – it was very flavorful and the bacon really took it over the top.  The fries were kind of a let-down (apparently frozen), but I’d go back for a burger any time  – and maybe split that burger and a chicken sandwich with my beloved.