Growing up in the West Atlanta suburbs, we only had one barbecue place that I knew about – Wallace’s in Austell.    It was the only one we ate at, and, as a non-driving child, I could only go where I was taken.  But, occasionally we made a journey to Harold’s (which closed three+ years back), to Malear’s (which has been closed longer than I remember) or to Sprayberry’s.  I’ve eaten at Sprayberry’s several times over the years since, including once at their outpost down by the interstate, but never written about them.  Today, as we were leaving Newnan (a suburb half an hour or so southwest of Atlanta), we stopped in for a bite.

Open since 1926, and in this location on US 29, near the old hospital, for most of that time, Sprayberry’s is a rambling three dining room place, that’s been added onto several times.  We walked into room two and took a seat at a table for four.  We were the lone occupants, save for the young man at the counter above, who was chatting with the waitress (he appeared to be her boyfriend, from the conversation we heard).  While we ate, we watched one of the  cooks (who she introduced to him as “mama” and said that she didn’t eat the mac-n-cheese “unless mama made it”) and one of the bus-men stop to chat and see if they approved of him.  It was a sweet interchange and you could tell how much the staff cares about each other.  Jo ordered the stuffed baked potato, with grilled chicken. 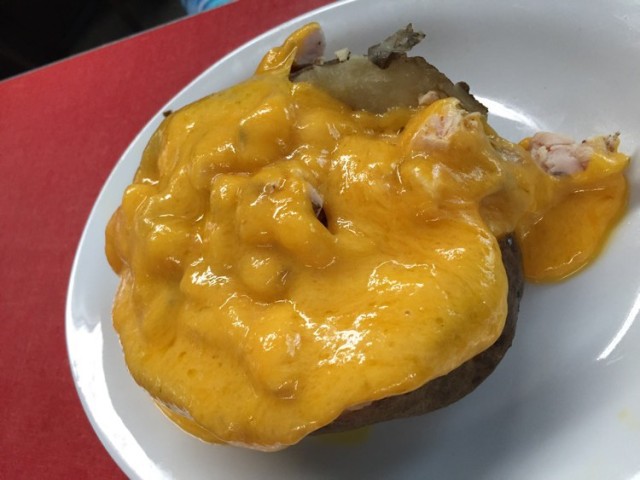 The potato was baked well (definitely not microwaved) and it looks like they then sliced up the chicken breast, cut off a slab of cheddar cheese and put in under a broiler.  I assumed it was Velveeta, and was corrected which led to one of my favorite quotes from my beloved.  She said that it was the kind of cheese they had on cheese toast when she was a kid.  Real cheese.

“Velveeta? We had REAL cheese. That’s one thing about my daddy – he liked real food. Fish, steak, deer or squirrel, it was real.”

I went with the chopped pork sandwich with Brunswick stew and fries.

This is just one side away from the “Lewis Grizzard special” – he preferred onion rings to fries.  If you don’t know who Lewis Grizzard was, he was a Southern humorist and author, who also wrote a column for the Atlanta Journal Constitution.  I found a link to a YouTube video of him here, explaining the differences about Southerners, as it relates to language.

The stew was as thick as a South Carolina barbecue hash, but fairly bland.  The fries were definitely from a food service, so there’s not much to say about those.  And  the chopped pork (I ordered it dry) on my sandwich was okay, but had very little smoke taste to it.   The sauce is vinegar based and served hot, out of a crock pot on the counter.  Looking back, I don’t know that it’s ever been any better.  It wasn’t bad, it just wasn’t anything special.