December 17, 2015 · by willoughbyandy · in Buckhead, Burgers, Georgia · Leave a comment

I’ve eaten at OK Cafe several times, over the years, most often for breakfast.  Back in January of 2015, Atlanta Magazine named their burger as one of the top twenty in the city and I felt compelled to try one.   By the time the article came out, they had experienced a fire (in December of 2014) that kept them closed for most of this year.   Over the last couple of months, we’ve driven by around 11:00 on Sunday morning only to find the line of those waiting outside the door.  This Thursday night, on the way to a friend’s house, I stopped by alone, figuring I could grab a spot at one of the counters.  They were packed, with a 15-20 minute wait, but there was no required wait for the counter and I saw a couple of empty seats. 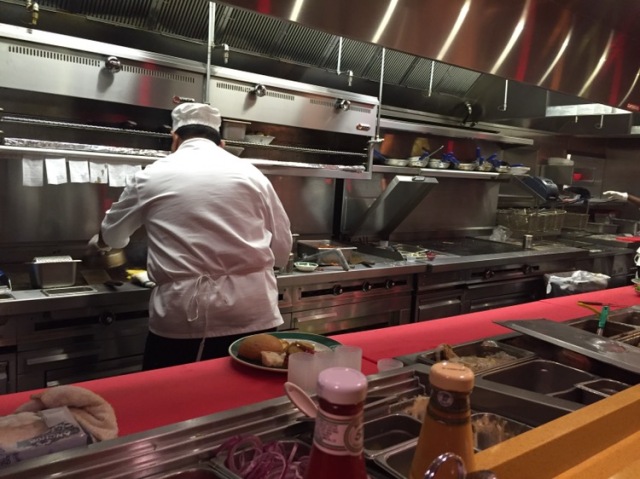 I took a seat at the far end of the counter (right behind the hostess station) and watched the four line chefs work their magic.  OK Cafe has a classic diner menu, focusing on blue plates and sandwiches at lunch and dinner.  And they do quite the breakfast business as well.

Tonight, I was there for a burger and there were six to choose from (including a veggie burger).  I chose the pimiento cheese burger, with fries – hold the pickles, onion and lettuce.

The burger was cooked exactly as I requested and the pimiento cheese had quite a “kick” to it.  It was an extremely messy burger that oozed with every bite.  The fries were double battered and hot.  A very good burger, which I likely would not have ever tried, had it not been for a list.