Located on 14th Street, just off the Georgia Tech campus, is a relatively new entrant to the Atlanta dining scene – Better Half, which started life as a supper club, Pushstart Kitchen.  Husband and wife Zach and Kristina Meloy began this labor of love at the Goat Farm in 2011 and converted it into a full time restaurant in September of 2014.  There is a great video here on their story.

We had an early reservation and, as a result, the place was fairly empty.  They offer both fixed price and a la carte menus and we were seated at the “chef’s counter”- which is actually what would be the bar, in most restaurants.

We chose to go with the fixed price side of things, although there was an “early bird” 3 course tasting dinner, which we considered.  The cool thing about sitting at the Chef’s Counter was that we had a prime seat to see all of the action.  It was like watching “Chopped”, live, without a judge – there were two chefs side-by-side.  Below, he was working on a riff on potato skins.

My beloved began with one of the”firsts” –  Southern aged “Cherokee Rose” (the cheese), served with a squash tart, pickled apples and baby mustard greens.

She really enjoyed the squash tart, although it was served cold, which was a surprise.   The pickled apples were surprisingly refreshing.   I chose to start with the beer cheese soup,

which was served with a farro salad, country ham powder and parmesan cream.  It actually started with the farro, ham powder and cheese, sitting in the bottom of bowl, into which they poured the almost boiling beer, table-side.  It was a good mix of flavors and the warmth was perfect for a chilly Saturday night.

For our main course, my dear chose the silk handkerchief pasta, served with wild mushrooms, tomato marmalade and porcini cream. 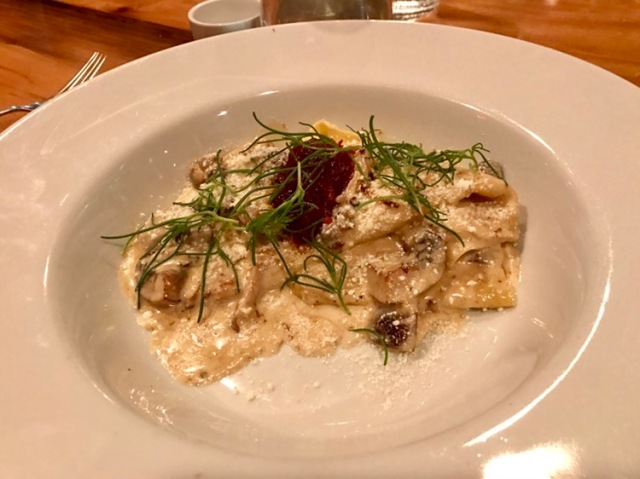 The story behind this dish, as I read it in an article from Zagat about 30 dishes to eat in Atlanta, was that this pasta is the dish that Zach served his future wife on the night he proposed to her and, as a result, is the one dish that will always be on the menu.  While I didn’t try the mushrooms themselves, the pasta and tomato marmalade were both excellent.  I’d order that marmalade on anything. 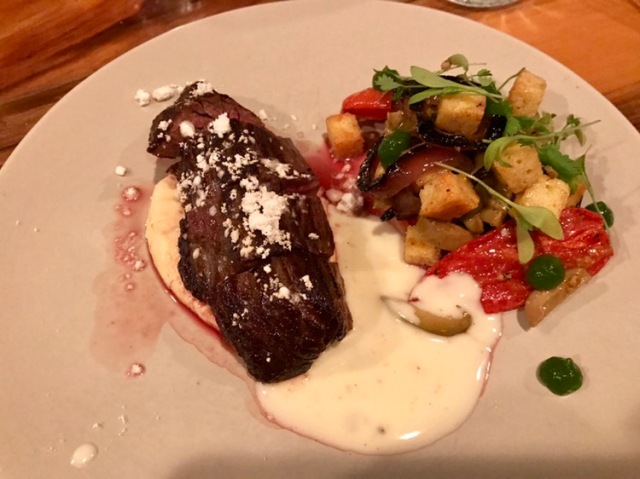 Bavette is another word for flank stea 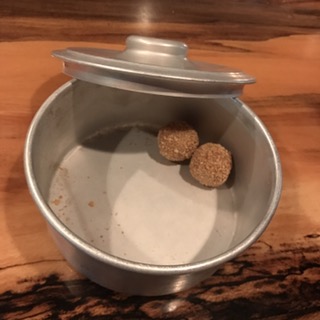 k, according to my ever-present dining companion, Google.  I also learned that a panzanella is a Tuscan salad of bread and tomatoes.  The dish was good – a nice mix of flavors.

We were going to grab dessert elsewhere, but as we were getting ready to pay, the server brought these two coconut bites – like arancini, but made with coconut, instead of rice.   It was a nice bite to finish the meal.  One thing to keep in mind – parking here is at a premium – there are a few spaces in the parking lot behind the building, which they share with a couple of other establishments, and some parallel parking on the side streets nearby.