Every spring, for the last twenty-something years, I head to a conference in Washington, DC.  As with every other adventure I take, there’s always planning around the Omnivore’s Dilemna.  Last year, I tried to get to a restaurant that was new to the scene in 2014 and has been named the second best restaurant in the South by Southern Living.  I arrived at 6:00 – they take no reservations – to find that there was a two and a half-hour wait.  For a seat at the bar.  I was forced to pass, so, for the next 11 months, I planned that my Wednesday night dinner would be there.  When I pulled the website up this afternoon, here’s what I found… 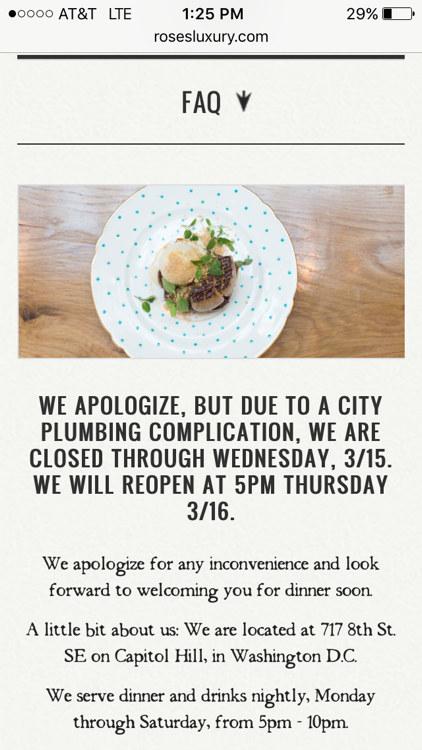 This required a reconsulting of “the list”.  Three years back, I had a wonderful meal at Komi.  They have a neighbor restaurant, Little Serow (rhymes with sparrow), which is on my list, so I altered my plans accordingly.  They also take no reservations, but say that the best times to get in are before 6:00 or after 8:30, Tuesday – Thursday.  I walked the seven blocks, in a biting cold, up to the address and couldn’t find a sign. 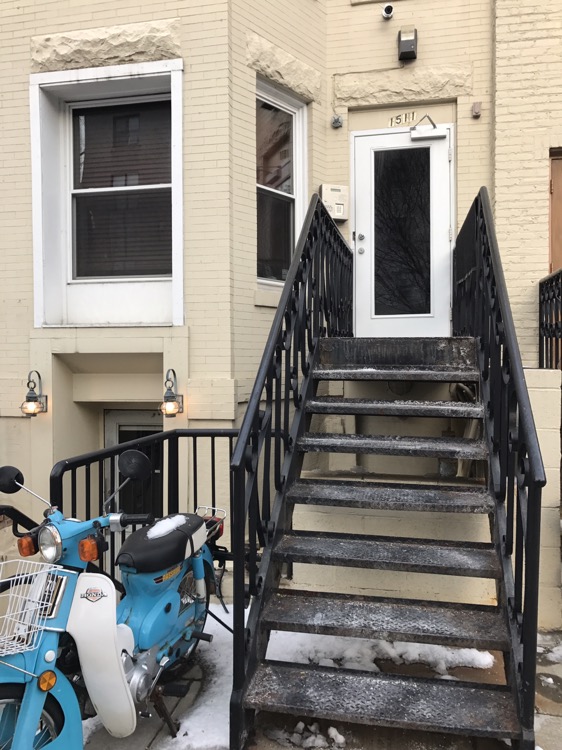 There isn’t one – but take the half set of stairs (to the left) down and walk in the small door and you’re there.  I was quickly seated at the long bar, to the right, with the wall below, straight in front of me.

It’s a long narrow place, and, by their own admission on their web site, teeny.  The kitchen is straight back and takes up the back section of the space. 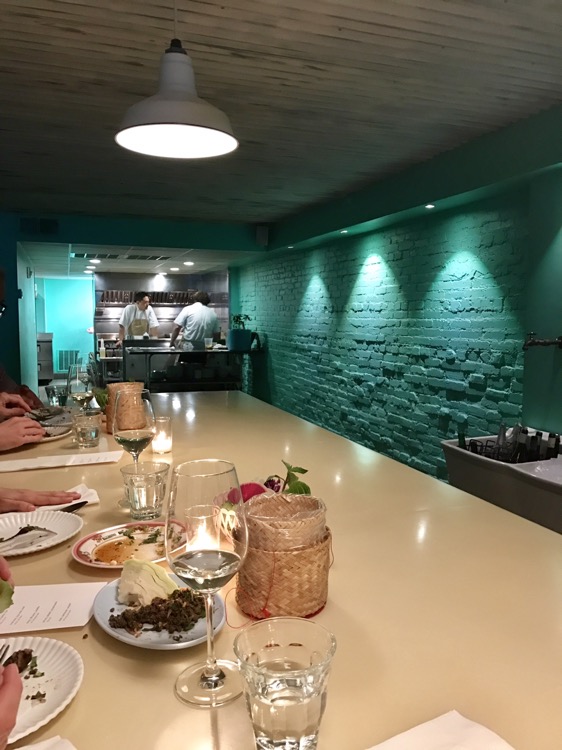 The dinner is a set menu, family-style (tonight, I was a family of one) dishes from Northern and Northeastern Thailand.  The first course arrived, nam prik kha nun: 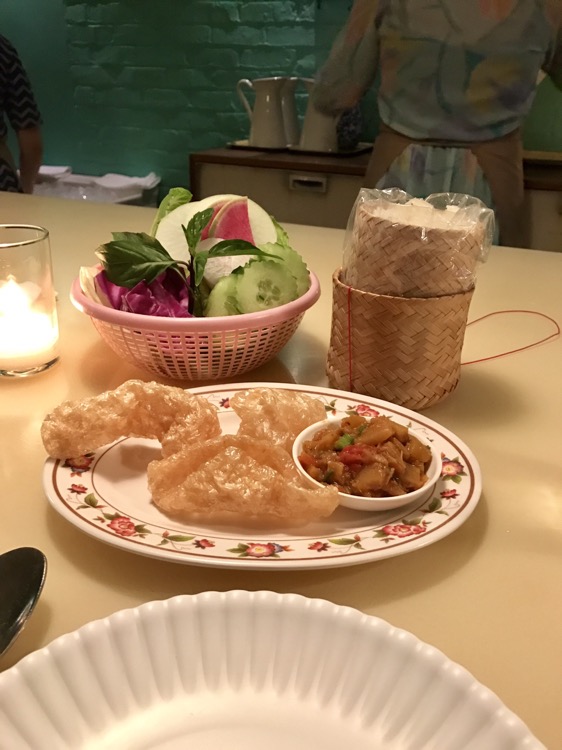 This is a dish comprised of jackfruit, shrimp paste and shallot, served with crispy pig skins.  They also brought out a bowl of cut veggies and a bamboo box of sticky rice to accompany the meal.  The veggies were to help “cut” the heat of some of the dishes.  And I needed them with the first course – this little salsa, on a chicaronne, had a surprising amount of heat.  I was gnawing on a watermelon radish between bites. This caused me to ask, “who am I?”  (I also ate all of the bok choy, during the meal.).  While I was finishing the starter, they brought a bowl of tom kha.

This was a coconut milk-based soup with snakehead fish dumplings, galangal and lime leaf.  The dumplings were tight marbles of fish filled dough, without the expected Asian dumpling shape.

The third dish, yam makeua yao, was my least favorite of the night.

Maybe it’s just my general dislike of cilantro.  It was boiled eggplant, with a cured egg and lots of cilantro.  I heard a podcast a while back that was talking about taste and taste-blindness (like color-blindness).  They said that about 80% of people in the world like cilantro – my beloved is near the top of this segment.  The other 20% think it tastes like soap.  I’m not in that 20%, but I’m close.

Up fourth was a laap pet lanna:

a dish of browned duck and duck offal with lanna spices.  Googling lanna spices, it appears to be a term for the spices native to dishes of northern Thailand.  It was served with sliced cabbage, which was described as a “delivery mechanism”.    This was very spicy, very hot and very delicious.  The cabbage topped with some of the duck and sticky rice was just at the edge of pleasantly, painfully hot.

I was planning to pass on dish five, due to my general dislike of peanuts, but the server told me that they were whole peanuts and I could pick around them.  I was glad she told me, as the tow hu thouk was one of my three favorite dishes of the night. 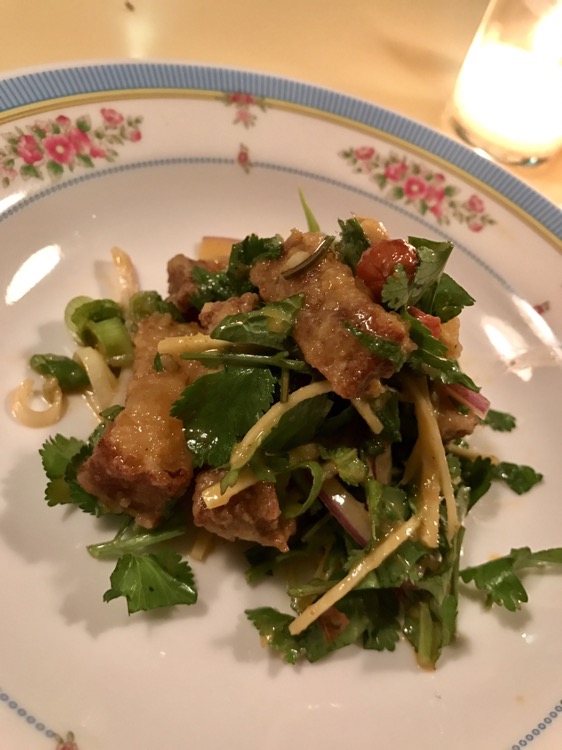 It was crispy fried tofu, with cilantro root and red Virginia peanuts.   The tofu was sweet and crunchy – a nice mix to the sour and hot of the rest of the meal.

The next to last course was phat naem sai khai (apparently, I failed to photo this course) a noodle looking stir fry dish with egg, sour sausage, finger chilies (they look like jalapeños but aren’t as hot) and tomatoes.  Every bite that contained a tomato was awesome – the sweet offset the heat of the chile and the sourness of the sausage in a nice umami way. 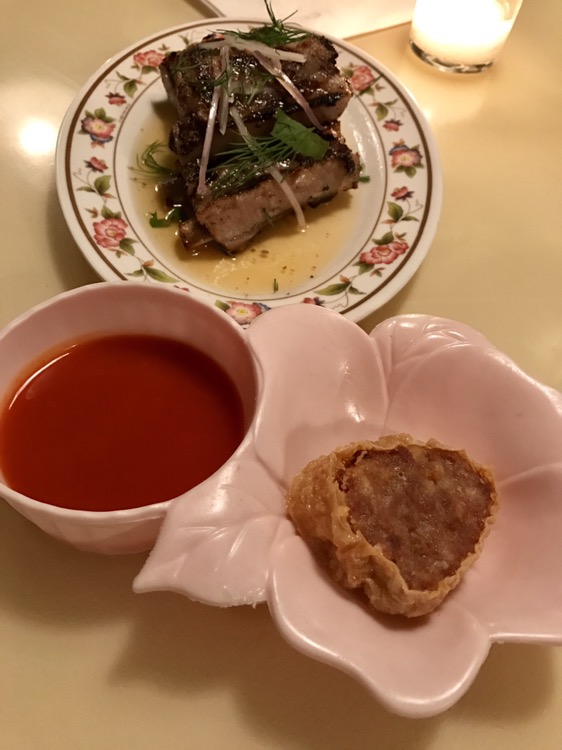 pork ribs, marinated in mekhong whiskey and topped with dill.  They were well cooked, with a crispy skin and meat that pulled off the bone with just the slightest of tugs.  But, it was the least inventive course of the meal.  As they brought the ribs out, they also brought a bite of shrimp and pork in fried tofu skin with a shark sauce for dipping.  The shark sauce was like a sweeter sriracha and this “bite” was perfect, with the sauce.  As I finished, the server brought a cube of coconut milk, rice and toasted sesame. 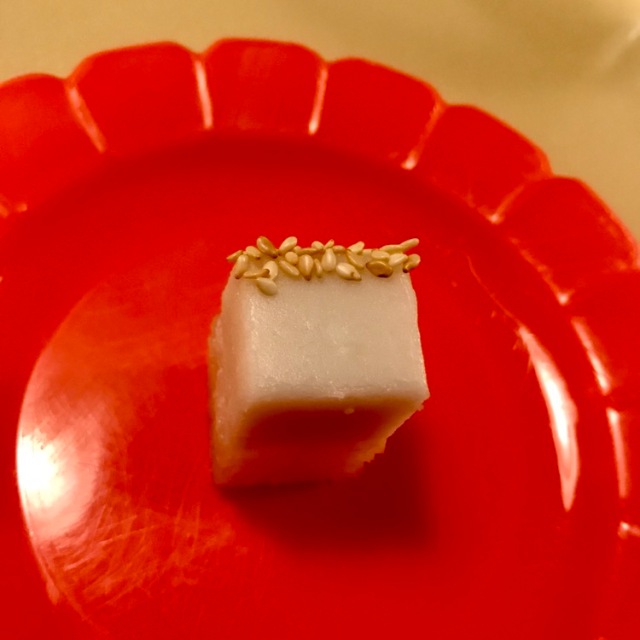 The meal was comfortable, well-timed, comprised of things that I normally wouldn’t order and phenomenal.  All for $49.  One of the better bargains in DC dining that I’ve found.  Note: they can’t handle parties larger than five, so don’t take a huge crowd.  But you should go.