With locations in eleven states and two Canadian provinces, the goal of founder Tomonori Takahashi was to make the daily ramen he was used to in his native Japan readily available to Americans.  To make it as common as going out for a burger.  Or ordering pizza.  He started in California in 2010 and opened the first location of Jinya Ramen Bar  in the Southeast, in Sandy Springs, in July of last year. 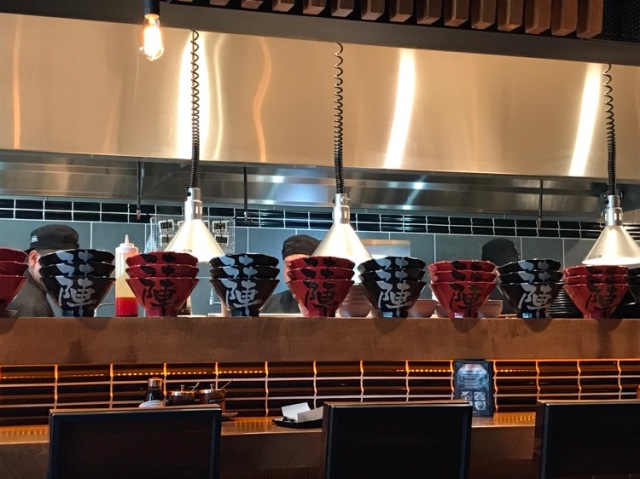 I have a similar goal and likely have ramen (or its Vietnamese cousin, pho) more often than I order pizza, these days.  On the night we went in, it was packed and we were seated at the bar which fronts the kitchen.  We started with gyoza, the pork dumplings that

seem present on every Asian menu this days.  They were pan seared and not overly salty.  We split the six to take the edge off before the noodles arrived.  According to their website, they make the noodles fresh daily and then age them for three days to maximize their flavor.  Some dishes have thick noodles and some dishes have thin noodles, in the same train of thought of using different types of pasta for different sauces.  I chose the spicy tonkatsu ramen, which was served with extremely thin noodles . 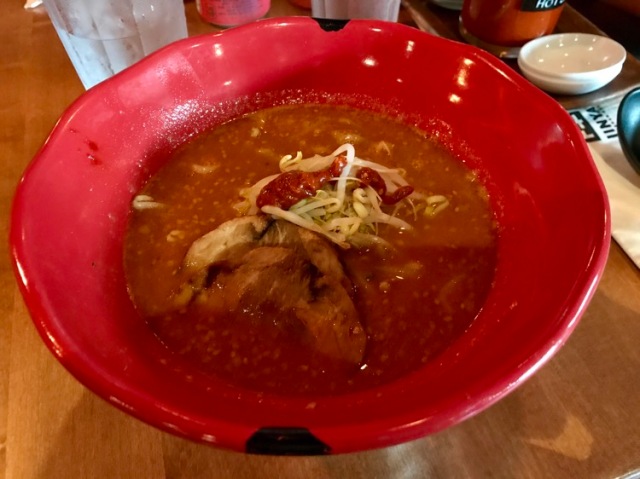 They say that their broth is slowly simmered for more than ten hours, combining the whole pork bones with just the right amount of bonito (small fish, related to tuna), dashi (Japanese sea stock), kombu (dried kelp) and other authentic ingredients.  Their broth is thick and layered, a little “fishier” and less salty than some of the other places that we frequent.  From the looks the night we were there, the goal of making ramen a more common dinner option seems to be gaining ground, at least in Sandy Springs.