Another place from the original list, L’Thai was a newcomer to the Atlanta scene, back in 2006.  Cut to 2017 and they’re now one of the longest tenured Asian restaurants in Atlanta.  And the first organic Thai restaurant, according to one source, in the South.  This may be the weirdest interior I’ve seen in a restaurant in quite a while.

We were meeting our daughter and son-in-law (they’d been before) and she told me to get a table near the tree.  I didn’t know what she was talking about.  I do now.  There is a big fake ficus, in the middle of the restaurant, with clear Christmas lights hanging from it, that serve as the centerpiece of the restaurant.  And then, there’s the wine bar, off to the left of the restaurant itself.  Oh – and there was live music (a guy playing good jazz standards, on an electronic keyboard).  This is a very different Thai restaurant.

I started with the tom kha gai (coconut soup).

The soup was very hot and full of chicken.  That’s always a winner for me.  And the mushrooms were easy to pick out <g>.  For the entree, I ordered pad kee mao (drunken noodles).  These noodles are my litmus test for a Thai restaurant.  I’ve eaten a lot of these noodles, at a lot of places.  If they do these well, it’s generally (but not always) an indication of the quality of the menu, top to bottom.  And I asked for them about spice level four. 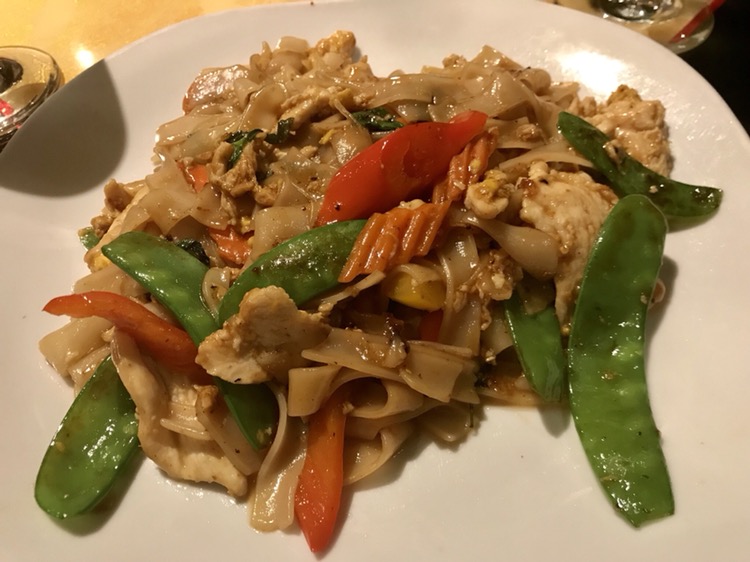 They seemed to ignore the spice level request, as these were so non-fiery that a dousing of chili oil didn’t even bring the heat.  This dish is so simple – stir fried rice noodles, soy sauce, fish sauce, oyster sauce, garlic, basil (there’s a debate between holy and Thai basils) and your protein – that the spice is the key to the dish.  This one fell flat, on that count.