Standing in the doorway, looking both at the sign on the sidewalk that said open 11-6 on Saturday and the closed sign in the window, I’m sure I looked like a dog that had just heard a high pitched noise.

Since “the game was out of town and he had to cook for a funeral”, Dexter Weaver had decided to not open today.  That’s what he told me as he walked out the door, encountering my quizzical face.  He went on to say that he had delivered the food to the church and had come back to cook for an auction house, where he had bought a bed.  I told him we had driven up from Atlanta, exactly because there was no game and I thought traffic and the crowds would be lite. 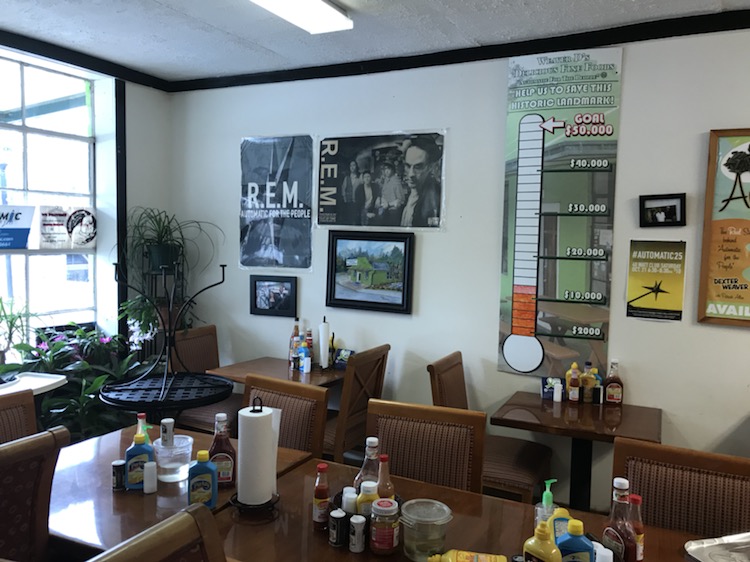 As we chatted – I had followed him inside by this point – he said he “probably” had an extra piece of chicken with what he was frying for the auction crew.  I looked around as we talked through the window, with him at the stove and me standing out front.  That’s mac-n-cheese in the pan on the right, browning butter in the pan on the left and green beans in the boiler behind it. 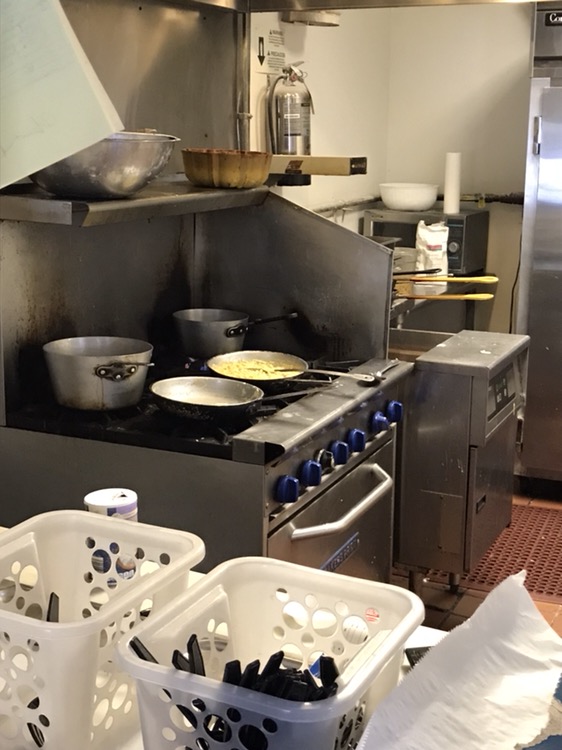 The walls were decorated with articles, posters and photos, including one for Automatic25 – celebrating the 25th anniversary of REMs “Automatic for the People”.  (You may recognize that slogan from the signage out front).   After he found he had cooked an extra roll (yay! for me), he threw it into the pan of browning butter to warm and told me that they had just had the Automatic25 party at the 40 Watt and that for that “silver” anniversary, a lot of the folks had gone silver, gesturing toward his graying hair.

I didn’t have a chance to order from the menu, above, I just happened to be there at the right time to get the seventh plate from a meal for six he was preparing for the folks at the auction house, adding a glass of lemonade to the fried chicken, green beans and mac-n-cheese.  While I was waiting the young man from the auction house came by and Dexter put him to work, draining the cooler and then asking him to wash up before dipping ice for the drinks he would take with him.

At one point, he said he thought had added too much cheese to the mac, but I told him that I didn’t think that was really possible.  I paid him for the plate, put some more money in the tip jar and and walked out to the truck, before I opened the styrofoam container.

The mac n cheese, definitely did not have too much cheese – it was creamy and salted and peppered perfectly.  The green beans were boiled almost as gelatinous as my mom always made them – with a pressure cooker.   And if they had sat in a warmer and you were late for lunch, I’m sure that they would seem almost soup-like. 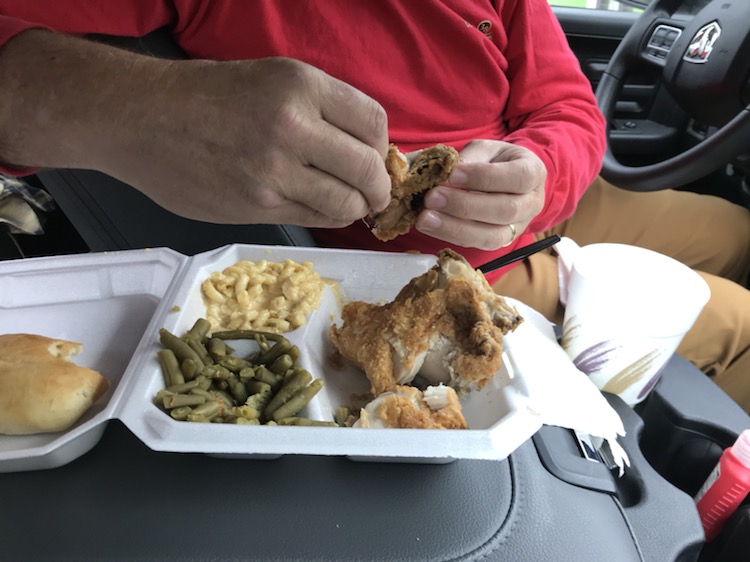 The chicken was still steaming when we opened the tray.  I took the thigh and gave my beloved the breast, which she (lovingly) shared.  The breading appeared to be corn-meal, was light and came off in big strips, as opposed to breaking and shattering into pieces.  The meat was moist and tender.  I loved it.

I know that my lunch today, was an exception – and a blessing, as I saw several folks come up (as we sat in the truck and ate) and then leave, so I’m counting myself lucky.