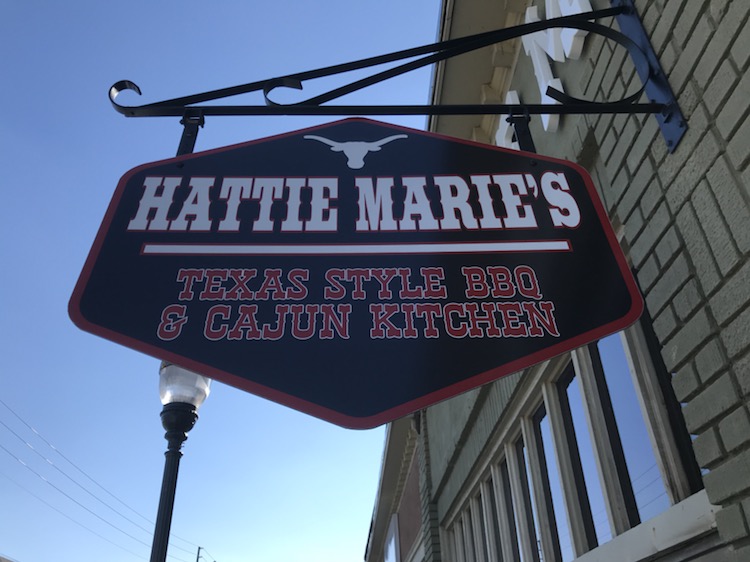 After roaming around with my beloved on a Friday morning, we stopped by her sister’s house, as we were getting ready for lunch.  She mentioned that a new barbecue place had opened in downtown College Park last week.  We happened to be in the area around lunch time today.  Coincidence?  I think not.  Off we headed to Hattie Marie’s Texas Style Barbecue and Cajun Kitchen.

Keeping in mind that they’ve only been open for seven days, I’ll try to be constructive:

Menu-wise, they appear to intend to be fairly broad, with barbecue, seafood and cajun dishes.  Best of luck to them in that, as excelling at two things as different as smoking meat and making roux is a challenge.

I placed our order and we took a seat.  We had decided to split a plate, so I ordered three meats (turkey, sausage and brisket) with fries and mac-n-cheese.  They appear to only have one sauce (there was only one on the table), but it was moderately thick and fairly spicy.

The fries were frozen crinkle cuts and like everything else on the plate, not really hot.   For a place that talks so much on their website about not reheating meat, they may need to reconsider.  The turkey was dry and cold.  And the mac-n-cheese was cold.  The sausage was pretty good, once I was able to slice it, although I contemplated just picking it up and eating it like a corndog.  But it was cold, too.

So far, I’ve been fairly negative, which goes against my general tone, and here’s why.   This brisket, had it been warm, may be the best brisket in Atlanta.  It’s definitely the best that I’ve had in a long time.  The right amount of fat, fork tender (no knife needed), moist and seasoned simply.  We talked about how good the brisket was in the car for the next half hour.  And the table next to us that had the chicken wings?  Those looked great – wings and briskets were the recommendation from my niece.

I’d love to see this place succeed as the brisket is excellent.  Maybe things will go well for them in the near term.