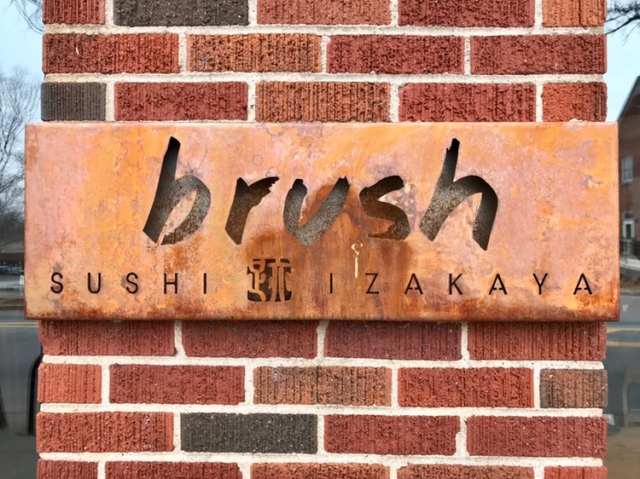 Brush Sushi Izakaya has been on my radar for several months, but the opportunity hasn’t presented itself.  Everyone raves about their omakase service (this translates to “I’ll leave it up to you”, in Japanese and it’s a chef’s choice of sushi and ingredients).  But that much raw seafood is  a bit of a stretch for my beloved, so a brunch on New Year’s Eve was the perfect introduction.

Located in downtown Decatur, just down from the Marta station, they were fairly empty when we arrived for brunch around 1:00.  There were a couple of folks sitting at the sushi bar (to our right, off camera, in the photo above), but for most of the meal, we had the place to ourselves.

Isn’t this chicken chart amazing? I may just save the picture for future reference.   It makes up most of the back wall of the restaurant, next to a window where you look into the kitchen and watch them cook yakatori.

Unsure of exactly what to order, we both started with a bowl of miso soup.  I’ve never really questioned what miso was, but after having this soup  – which was so different from the typical hibachi house miso –  I had to google.  Its flavor comes from the choice of miso paste, which is a traditional Japanese seasoning that is made by fermenting soybeans and salt with a particular fungus – Aspergillus oryzae.  This paste is then dissolved into (typically) a fish-based stock, although there are vegetarian options using kelp or shiitake mushrooms. 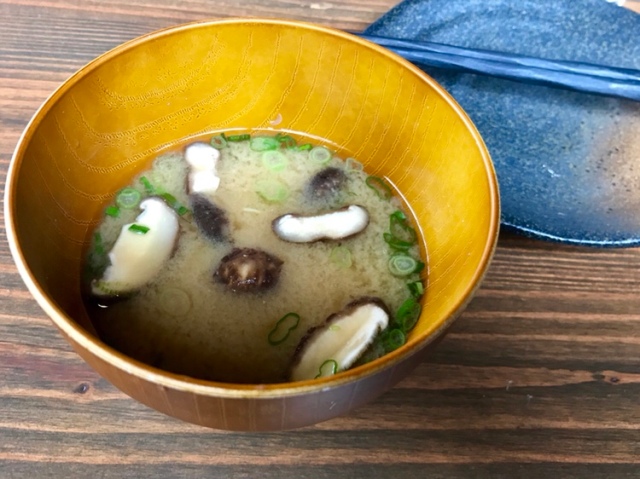 The flavor of this soup was multi-layered, without an overwhelming fishiness.  As executive chef Jason Liang is known for two things: the quality of his ingredients and his sushi, we started with rolls.  We went the New World roll route – they had several choices here, along with Old World (more traditional Japanese) rolls –  and each ordered a half roll:  crunchy tuna  (left) and Snow Crab California (right).

The rolls were as good as they looked, and they were gorgeouse. And the ginger was the “real white stuff” (which, as I learned from a friend at Christmas, is far superior to the “imitation pink stuff” you see most places).

My beloved ordered the spicy miso ramen bowl (I tried to get her to order the lobster ramen, of which they only serve 4 per day, to no avail),

with pulled pork, cabbage and an ajitsuke (soaked in soy) egg.  She generally prefers pho to ramen (when given a choice of Asian soups), but was enamored with this bowl.  The pulled pork was different than the typical sliced pork (chasu), and absolutely melted in your mouth..

I was really torn on what to order, but our server (who was great) really sold this dish.   “We took three ritzy things and put them together.  What else could you want?” 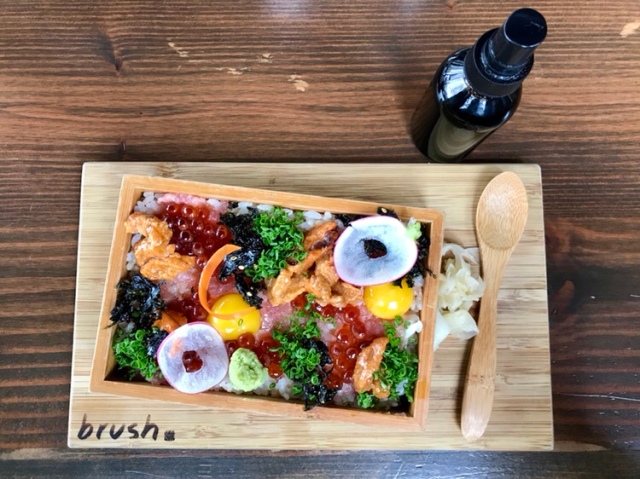 The small spray bottle above the tray is soy sauce.  This was a beautiful dish that blew me away with its complexity.  The uni was like a taste of the sea with every bite and the fatty tuna was like eating fish butter.  This is a meal I would not have even considered ordering three years ago, but I went with the recommendation of the server and was pleased, as could be, with the result.

What a fabulous meal.  I looked at the dinner menu before we left, plotting a return visit.