In the interest of full disclosure, I’m a barbecue snob.  I’ve known it for a while, but today really drove the point home.  When I leave this much on a plate, it’s just not a good sign.. 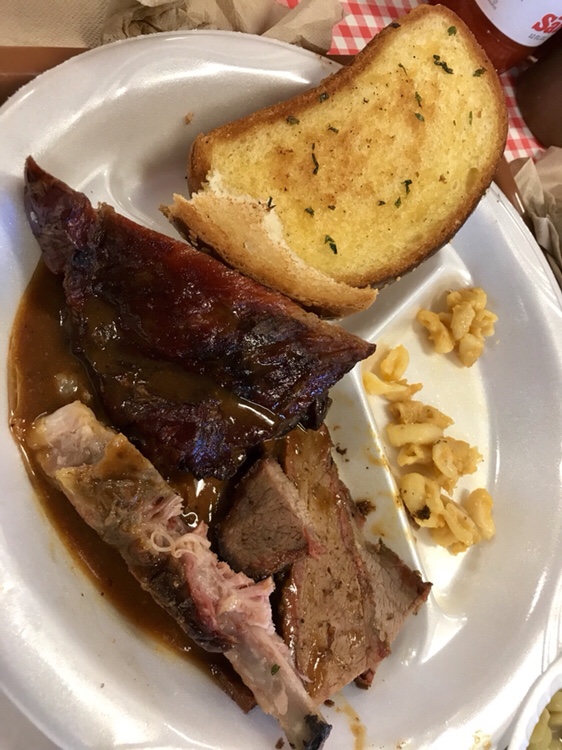 Slopes’s BBQ has been on a secondary list of Atlanta area barbecue joints since July of 2010. They listed the top 5:

And then they listed others, by county, with any reasons that you should go (ribs, banana pudding, whatever).  Slope’s was listed in Fulton County, with an address only.  Nothing else.  There’s a reason for that.

Part of a four location local chain, the original location is in Roswell, with three others, that appear to be franchises from their website.  It was clean and very “folksy” inside.  I ordered a rib and brisket plate, with lima beans and mac-n-cheese.  Be warned – there is a non-disclosed pickle hiding under your bread.

I should have known I was in trouble when, right after I ordered, I saw a young lady cutting open a package of ribs and placing the racks on the inside of the smoker.  When I asked the waitress (? – I don’t know if that’s the correct term when you order at the counter and someone brings it out) where they got their ribs, she asked someone and he said they come from Louisiana.  From Sysco.  Food service ribs, that I could have delivered to my home and make myself.

And I doubt that I could have made them any worse.  They were tough and tasteless and covered in a thick, sweet sauce.  And this is not sauce on my fingers – it’s grease from the ribs:

The brisket was not near fork tender and was chewy.  The sides were fine, but they were nothing special and nothing was warm.  My beloved ordered a quarter chicken, white only, and it was, at least hot and freshly prepared.

Maybe the original location actually does serve something that doesn’t involve a refrigerated truck delivering everything to the back door.

When you commit to 52 weeks of (new) barbecue, you’re bound to have a few strikes.  Strike one.