Here’s a report from a recent visit to the Dunwoody location of Takorea, which is located in the middle of the Kroger parking lot at Chamblee-Tucker and 285.  I’ve eaten there several times over the last two years, most recently when our daughter had her daughter at Northside – and we’d come to visit, with carry out dinner.  On this Saturday, we were in for lunch.  Arriving around 1:00, it was kind of quiet, but on a weekend evening – when it’s not blisteringly hot – that patio has quite a wait to get a seat.

From Chef Thomas Lee, the man who started his restaurant group with the Westside’s Hankook Taqueria, the restaurant expertly blends Korean and Mexican flavors.  The menus are similar, but not duplicate, between the three restaurants (there is another Takorea location in midtown).  They do have the sesame fries (below) which my wife loves.  I’m pretty fond of them, too, but I love the fried sweet potato chips with chili aioli that they only serve at Hankook.

We shared the sesame fries – they come with a house made ketchup, with a Korean flair (gochujang, maybe?) that works with the sesame on the fries in a perfect combination.  I chose a couple of tacos: 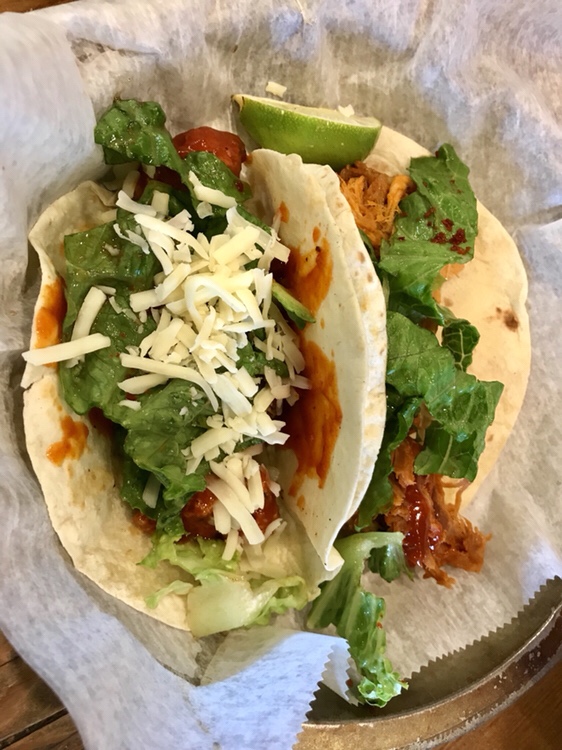 On the right, spicy pulled pork in a Korean-style bbq sauce, topped with red pepper sauce and lettuce.  It usually comes with the “tako salad” – romain lettuce, cilantro and onions tossed in a soy sesame vinaigrette dressing – but I held that.  It was as tasty, as usual.  This pork bbq would make a mighty fine barbecue sandwich, if Chef Lee decides to take on the folks at Heirloom Market (in the Korean / barbecue fusion space).

For the second, I usually go with the beef bulgogi taco, as it is hard to beat, but the daily special was the buffalo chicken taco, topped with jack cheese and lettuce.  It is hands-down, my favorite taco there.  If it’s on the “Specials” menu, don’t pass it by.  I’m not sure what the Korean flair to the buffalo sauce is, but it’s there and it’s delicious.

If you’re in the area, the Dunwoody Takorea is definitely worth stopping by.