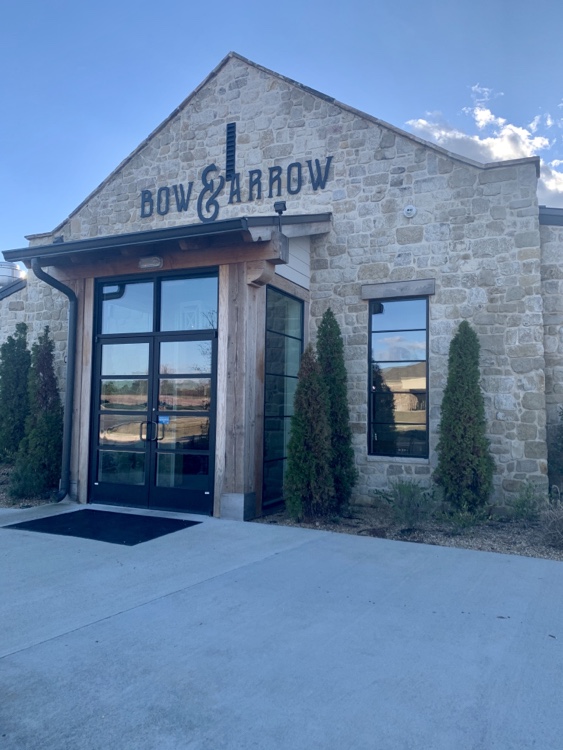 Today’s adventure involved a road trip to Auburn, Alabama, for barbecue with a group of friends.  We have these folks that we camp with – three couples in metro Atlanta, one in south Alabama and one in South Carolina.  Eight of us (it was a little far for the South Carolinians, so they weren’t part of this adventure) were preparing to gather (after a successful meet up at Rodney Scott’s in Birmingam) over the holidays and one of the couples suggested Bow & Arrow.  Owned by chef David Bancroft, of Acre (which we visited in 2016), Bow & Arrow has been open for about 18 months and is his interpretation of the Texas smokehouses of his childhood, placed in a contemporary South Alabama context. 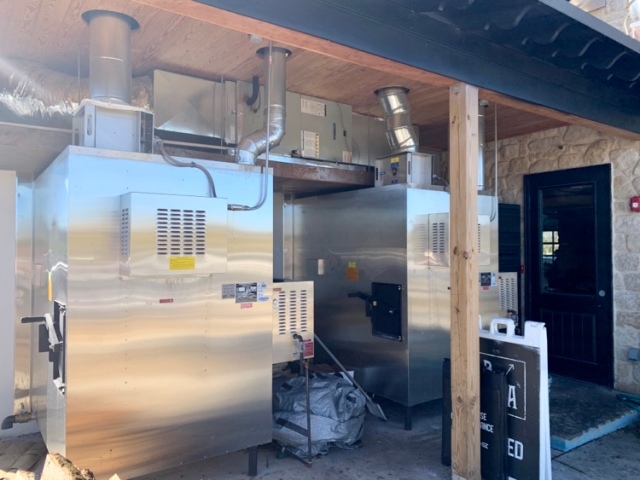 Before eating, I went around back, to see what I could see.  The first thing that I found was these two big Southern Pride smokers.  This was off to a good start.

But one thing, that wasn’t terribly promising, were the fixed business hours.  A place that has to guarantee that they’ll be open until nine, every night, almost has to over prepare their meats.  Which means that some will be left over for the next day. And that means that some of the meats that you’re eating today, may have been smoked yesterday.

Anyhow, as we walked into the ordering line, the first thing that we saw (past the tortilla making machine) was the meat warmer, below. 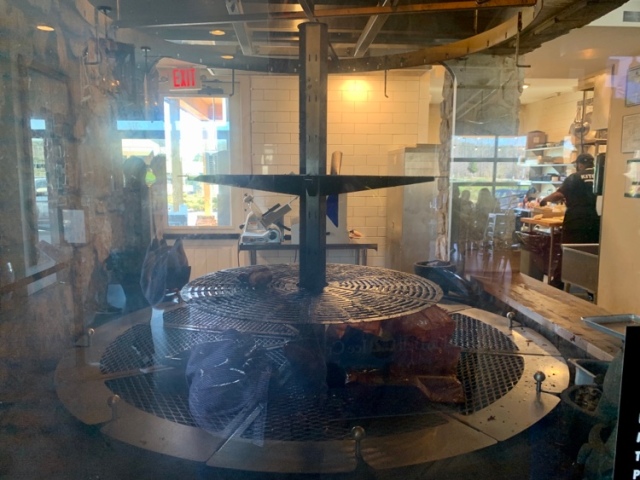 On this carousel of warming meats, the proteins are kept warm waiting for serving.  Immediately to the right of this carousel is where you make your selection.  In the picture below, he’s cutting the meats in the forefront and weighing them on a scale off-left of the photo. 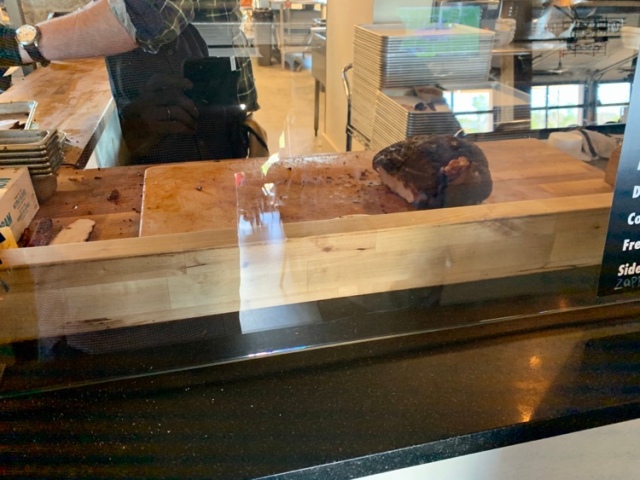 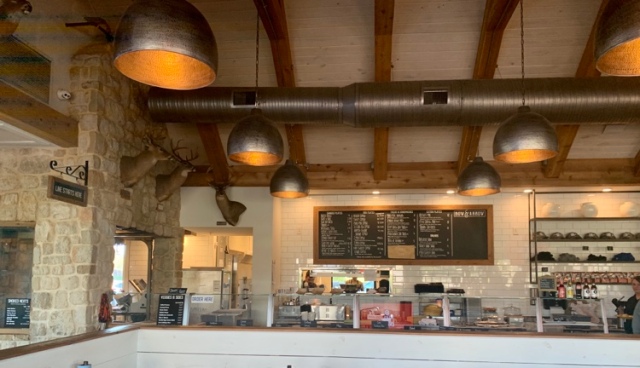 Working your way down the line, you make your additional selections, pay and find a spot to sit.  There apearred to be a couple of choices you make that aren’t right from the line – someone behind us ordered the tacos and they gave her a number and said they would bring those to the table.  One of us chose a two meat plate with lean brisket, turkey, house-made tortillas, hash brown casserole, slaw and deviled-egg potato salad. 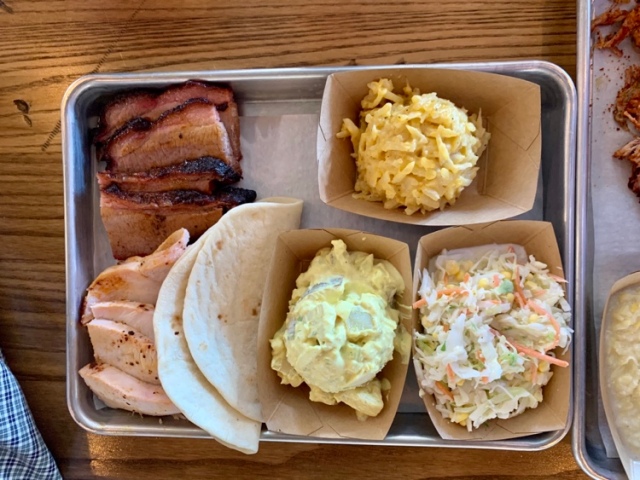 To start with, on this platter, the hashbrown casserole was absolutely awful.  I tried it, too, and it tasted like nothing that had ever had potatoes in it.  Another couple at the table felt the same way and took their order back, along with us, and exchanged it for something else.  The slaw had both mayonnaise and vinegar in it and was well received, as was the potato salad.  My beloved made tacos from both the brisket and the turkey, seasoning them with the Alabama white sauce from the condiment bar.  The meats both looked moist and smoked well. I could confirm the brisket, as I had some also, but we’ll have to take my wife’s (and Mark’s) word for it, on the turkey. They both enjoyed it.

My main platter was a three meat plate with ribs, moist brisket and pulled pork with creamed corn, mac-n-cheese and house-made Texas toast. 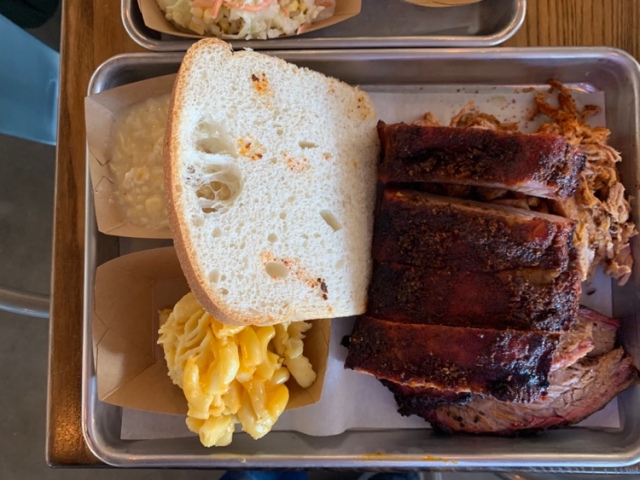 The mac-n-cheese and creamed corn were both fine, but neither was anything to write home about.  The ribs were very meaty and had just the right amount of tug when you pulled the meat off the bone.  They had a rib sauce, on the table, that was very good on the ribs. I’m not sure quite how to describe that sauce – tomato-based with a little heat and “tang” to it.  Nice smoke ring on the ribs, too.   The brisket (which I ordered moist) was very good, with a solid smoke ring and good flavor.  They had a Texas Red sauce that went well with this (although there was also a mustard-based sauce that got good reviews, at the table).  The pork was smoked well, also.  I enjoyed the white sauce on the pork.  A little closer view of the meats – 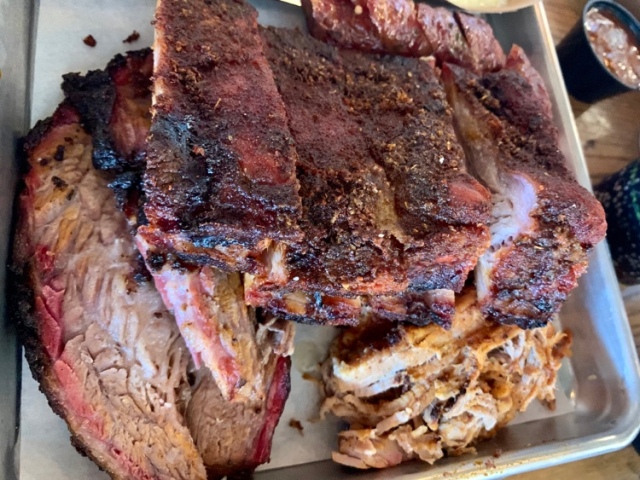 you can see the smoke ring, very clearly. 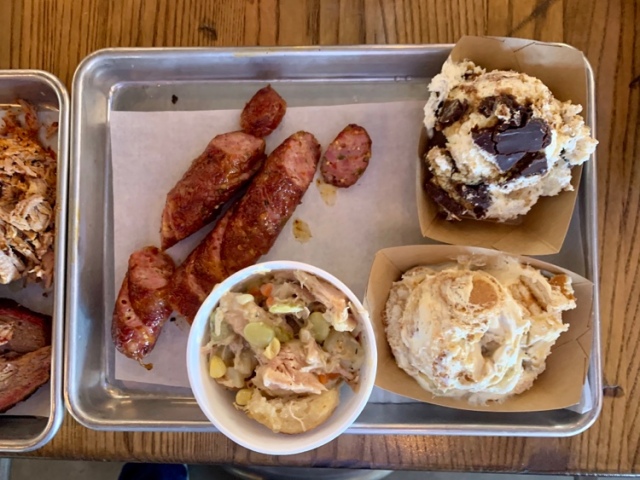 I, as is my wont, over-ordered – a side of jalapeno-cheddar sausage to go with my plate below.  And a smoked chicken potpie made with home-made biscuits.  This tray did, also, contain the desserts – one of which (the eclair) was not mine. So I didn’t, technically, eat full two platters of food for lunch.  But close.

Overall, the meats were very good – these folks have a really good handle on how to smoke meats.  The sides were okay.  The desserts were good (banana pudding) and exceptional (Memaw’s eclaire – which Monica, who helped us before ordering, said was the best thing on the menu and didn’t lie about).  Apparently, it was like a banana pudding with a thin layer of chocolate gnoche.  Several times, riding down the road since, my beloved has said, “If I was ever on the Best Thing I Ever Ate”, it would be that eclair in Auburn.”  High praise, indeed.