Late in the summer of 2010, I kept hearing stories of the “secret” burgers that only appeared on the menu at Holeman & Finch Public House at 10:00 pm.  And that they only made 24 per night.  And that they sold out EVERY night. ((the Legend).

I began plotting a way to end up there around 9:45.  It’s located on Peachtree, near Peachtree Battle, so I couldn’t really come up with a convenient “excuse’ to be in the neighborhood….

Then I heard that they had burgers ALL DAY on Sunday for brunch, starting at 11:30.  The next Sunday we were there at 11:30.  That day, we waited an hour.  Two weeks later we took the girls and got there at 11:00 and made the first seating. 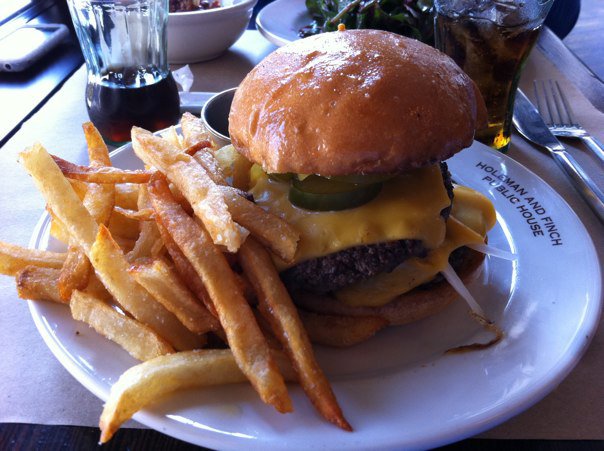 Griddled patties, American cheese, homemade ketchup and grilled onions.  That’s all that there is to it.  Many folks believe that this is the best burger in Atlanta.  On a 2011 episode of the Food Network’s “The Best Thing I Ever Ate” about hamburgers, Chef Anne Burrell chose the burger at H&F as the best burger she ever ate.  I’d say it is definitely among the three best in the city and near the top for the country, in my meager travels.