As I was leaving Odessa one Monday, I passed by the Permian Basin Hamburger Company (on Main Street since 1978) and whipped the car around to try it out.  Sadly, they closed at 3:00 and it was close to 4:00.  Dejected, I headed back toward I-20 and the Midland International Airport.  It was then that I saw Watt’s Burgers (Serving Coca-Cola and Odessa since 1952) and pulled into the parking lot.

This place looks like it hasn’t changed since the 50s, except for the occasional paint job.  A big awning to shield you from that hot Texan sun (just a sweatin’ and a pantin’, ’cause his work is never done), advertising their offerings and under which you can park and eat, a small parking lot out back and a drive thru that passes under the awning in both directions.  It reminded me, in concept, of Keller’s, in Dallas, without the car service, massive awnings and beer sales. 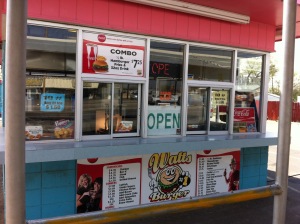 Walking up to the window, the choices weren’t broad – 1/2 pound burger, 1/2 pound cheeseburger, foot longs and sundry fried things (potatoes, onion rings, chicken tenders) and I couldn’t see anyone inside.  Being the enterprising not-so-young man that I am, I walked into the drive-thru lane and jumped up and down on the plastic hose that rang the bell.  “Ding”.  And a sweet little lady who looked like she had worked there since 1952 came and took my order.

I went with a simple cheeseburger, fries and a drink and waited to hear her yell “47”.  While I waited, I moved my car under the awning.  It was then that I noticed the chicken place next door – Pollos Asados Rio Grande.  There was one guy, in his truck eating at Watt’s when I arrived.  I was there for 15-20 minutes.  One car went thru the drive-thru.  That’s 3 sales in 20 minutes.  Granted, it was an odd time of day 3:30-4:00, but this was not a flourishing business.  But in the time I was at Watt’s there was a steady stream of cars in Rio Grande’s drive-thru and people inside – at least 20 folks.  I likely made the wrong choice (so I ended up having chicken, too.)

After about ten minutes, my number was called and I took my bag to the car.  There was a copious amount of fries, but I’m pretty sure they were frozen Ore-Ida Golden Crinkles.  Then I opened the burger.  The first thing I thought was, “that thing is huge”.  So I took this photo for perspective.

When I took the first bite, I realized the best thing about it was the size.  It really wasn’t that good. So I put 3/4 of the burgers and fries in the bag, walked around to the trash can and headed next door….