On a pleasantly cool morning, after a hike at Kennesaw Mountain accompanied by a couple of cool podcasts from KPLU studios (Jake Shimabukuro, followed by John Pizzarelli), I had worked up a bit of an appetite.  It has become something of a ritual to follow a Saturday morning hike at Kennesaw Mountain with lunch at the Red Eyed Mule.  This morning, as I was lone wolf, I figured this would be a good opportunity to try out Mountain Biscuits.  We’ve driven by there three or four times and there are always a number of cars, and they had appeared in the March, 2012 Atlanta Magazine listing of Cheap Eats.

The menu was not terribly complicated, or broad.  I asked the young lady who took my order, who (based on a reading of the AJC article on the wall) may have been the owner’s daughter, how the barbecue was.  She said, “really good.”  Unless the food was really good, I saw this as possibly my single shot at trying this spot, so I figured that I’d sample both breakfast and lunch.

I placed my order – a red  hot biscuit and a small barbecue sandwich.  She asked if I’d like to make the sandwich a combo (per the menu, adding med. fries and a jumbo drink).  I said “sure”, paid my money and waited.  Inside is fairly small – three or four tables and a counter that seats six or seven  There were also four long picnic tables outside.   She didn’t take my name, or give me a cup for my fountain drink, so I found a spot at one of the tables and snapped this photo. 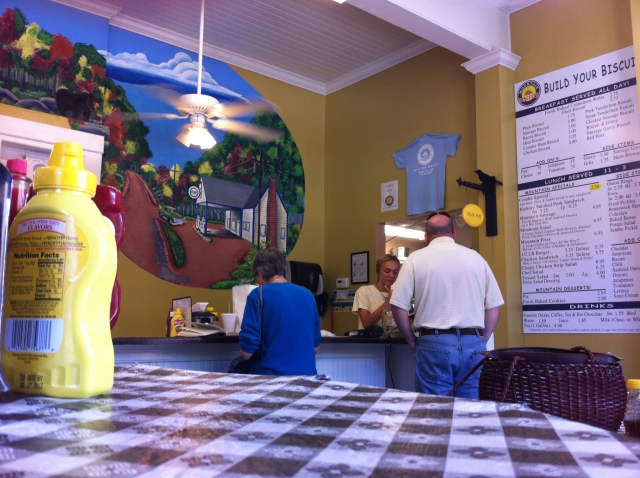 I asked for my cup and was given an eight-ounce styrofoam cup.  If this is “jumbo”, I’m concerned.  Ten minutes later, a lady walked out of the kitchen and yelled out what was in the bag, which turned out to be my order.  They don’t have table service and don’t seem to care whether you eat there or not.  While I was waiting there was a woman seated at the counter whose order came up.  They handed it to her and she asked for a plate because she was going to eat there and they looked truly annoyed.  Service doesn’t really appear to be their hallmark.  I assumed that meant that the food must really be good…

I  started with the biscuit – grilled red hots on a large, fairly flat biscuit.

The grilled links weren’t “hot” at all.  The biscuit was okay, but nothing to write home about.  Not what I’d expect when “biscuits” featured so prominently in their name.  On to the barbecue.

When I opened the styrofoam container, the first thing I saw was the pickle.  You’d think that if someone was going to defile your food, there would be a warning about it on the menu.  No such luck.  I dug a fork out of the plastic sleeve and removed the pickles.

The fries were, in a word, awful. Over-greasy and under-cooked. How you do both those things to the same fry is baffling to me.  The centers were too chewy for my taste, and they appeared to be fried Ore-Ida Golden Crinkles.

The barbecue was bland. No smoke taste. Stringy.  Blah.  If the young lady who waited on me thought this barbecue was good, she must have grown up eating only at Wallace’s, too.  I’m glad that I sampled both breakfast and lunch in a single visit, because if I’d had only one or the other I would have assumed that I had the “wrong” one and the other meal must be the reason why the parking lot is always full.  It must be due to convenience.  I wonder how many of their customers make return visits?  I, for one, will not.