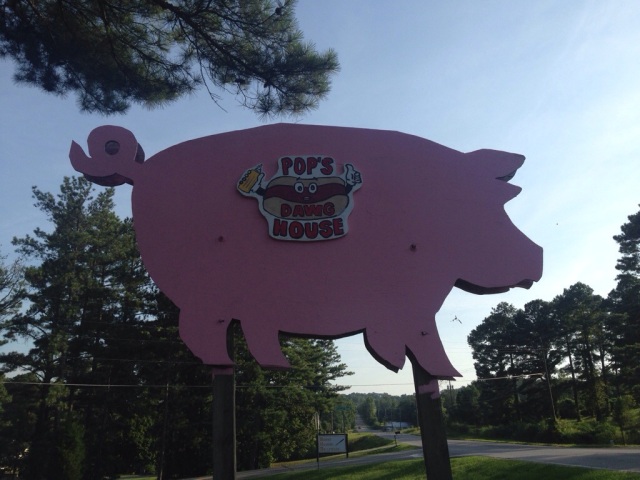 Here’s an admonition about the power of suggestion….

Several months back we were driving up to Cartersville to meet someone for dinner and we passed by this place in the dark and I thought “Hmmm.  I didn’t know there was a barbecue place there”, and made a mental note.  Tonight, when we were looking for dinner choices, I remember the BBQ place on 61 and thought we’d give it a try.  I was telling Jo that it was out past “George & Tara’s” (friends of ours who live in Dallas) and she thought I said that it was out past “the Georgian Terrace” which led into quite a discussion about why I was driving this way (North and West) and opposed to that way (South and East).  Nuance is a funny thing.    Anyhow:

When we pulled up and were actually able to read the unlit sign, it said “Pop’s Dawg House” with an anthromorphized chili dog, plastered on a big pink pig.   There was also another sign advertising chili dogs, hamburgers and fried catfish.   We debated whether to go in or not and Jo said, premonitionally, “this is going to be  a disaster”.   We walked in and there was no barbecue to be found.   We asked if it had used to be a barbecue place and were told yes, but that had been closed for six or seven years before they opened eight  months ago.  Studying the menu, Jo chose the fried catfish basket, while I took the chili dog special, with fries and a drink, along with a small burger.   We took a number and found a seat in this converted house and listened to “House Hunters” on the TV overhead and parts of the conversations from the (extremely) locals who were eating dinner or picking something up.  In about ten minutes, they called “20” and brought a tray of food over to us.

I failed to get a picture of Jo’s catfish basket, but it was a single catfish filet, with a styrofoam container of slaw, hush puppies and fries.  The hush puppies appeared to be balls of pure fried cornmeal, with no onions or anything else inside of them.  The slaw looked like oatmeal and was, according to the one who tried it, awful.  She tried adding yellow mustard, but even  that didn’t help.  The catfish, on the other hand, was excellent – lightly battered, thin cut and served hot.  She said that she’d go back, just for the catfish, although it was comparatively expensive ($7.99) to just contain the one filet.  I don’t see a return visit occurring.  My $5.99 special (excluding the burger) took up the rest of the tray. 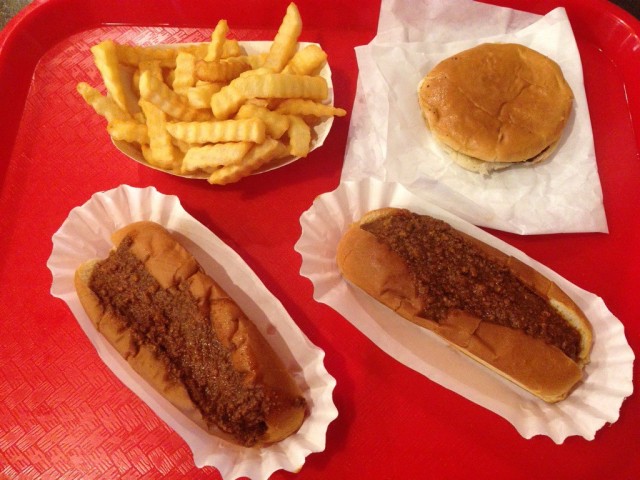 This was the first time that I ever recall ordering a chili dog and it being served without yellow mustard on top.  I did find that it was on the side, between the dog and the bun and underneath the chili.  Interesting.  This was, without a doubt, the worst chili on a hot dog I’ve ever had that I did not see come straight from a can.  It had no “heat” and not much flavor.   The little burger (their version of a slider) was okay – I ordered it because the lady behind the counter made a big deal out of the fact that they make their own patties.  It was hand formed, although I’m fairly certain they didn’t grind the beef in house.  The burger wasn’t bad. It’s a sad testament to a meal when the thing you enjoy most about it was the frozen crinkle cut fries.

Overall, it wasn’t worth the drive.  I could see stopping by (for catfish and fries, hold the slaw) if you were traveling from Cartersville to Dallas.