I stopped for lunch at Fincher’s Bar-B-Q, after a morning meeting in Macon. I had not eaten at Fincher’s for at least eight years, and they had recently come back to my memory after reading the 29 Barbecue Bucket List article last month.  In it, Myron Mixon (you may know him from the Destination America TV series BBQ Pitmasters) said if he could eat barbecue at any place in America, he’d go to Fincher’s – it reminds him of barbecuing with his dad. That’s a fairly solid recommendation, so I determined that, on my next trip to middle Georgia, I’d make a return visit. 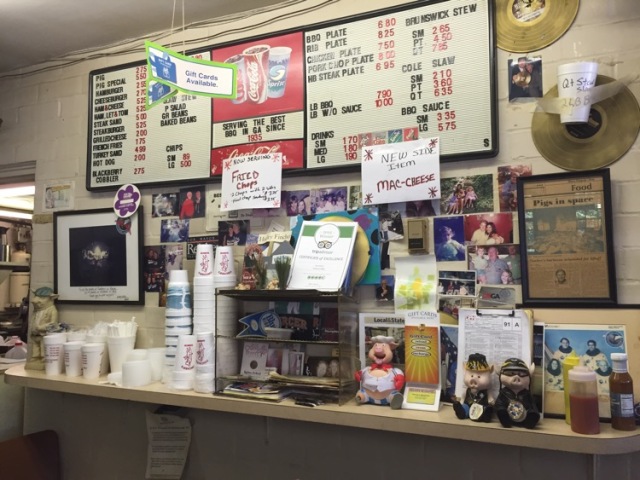 Currently running the show, here, is Jake Fincher.  He was behind and in front of the counter (and in and out of the kitchen).  I was there a little late for lunch, so I grabbed a seat at the counter above.  The first time he passed by, he asked me if it was my first visit.  I said I hadn’t been there in close to a decade.  He welcomed me back and walked into the kitchen.

Here’s why I love middle Georgia.  Once he found that I was a “barbecue fan”, he stopped every time he walked by and we had more conversation.  We talked about the line of work I was in, his views on politics and running a small business, and barbecue.  And more about barbecue.  He told me that they cooked on the same masonry pits that his grandfather had cooked on, shortly after they opened in 1935, and that the sand in that pit was from the 1950s and that style of cooking added to the distinct flavor.

I ordered a Pig special, which is a pork sandwich with two sides – mac-n-cheese (which is new) and green beans.   The meat came pre-sauced and was very good.  He told me that he wrapped the pork in plastic bags to keep it from drying out when it came off the grill.

Jake and I talked more barbecue.  And then he asked if I liked hot sauce.   When I affirmed, he handed me the cup below, as he told me that he grows ten kinds of peppers in his garden at home (several jalapenos and a few Thai chiles).

The hot barbecue sauce was excellent – hopefully one day they’ll bottle it like they do the regular sauce.   Then he asked me if I had ever had one of his burgers, and when I said “no”, he smiled, said they were unique and yelled into the kitchen to get me one.

He said that these were the burgers his grandfather had started making in the Depression.  They cut the meat with bread to make it last longer (like the slug burgers of Mississippi and Louisiana) then, and he still makes them that way.  Pickles on a cheeseburger, onions on a hamburger, was the way his grandfather made them, and how they appear on the menu.  The burger was good and Jake told me that they sell as many burgers as they do pig sandwiches these days.

I felt like I’d made a friend during the course of the meal – if I’d stayed another half hour, we would probably have been planning a road trip to Franklin Barbecue, in Austin.  If you’re in Macon, swing by – support this guy.