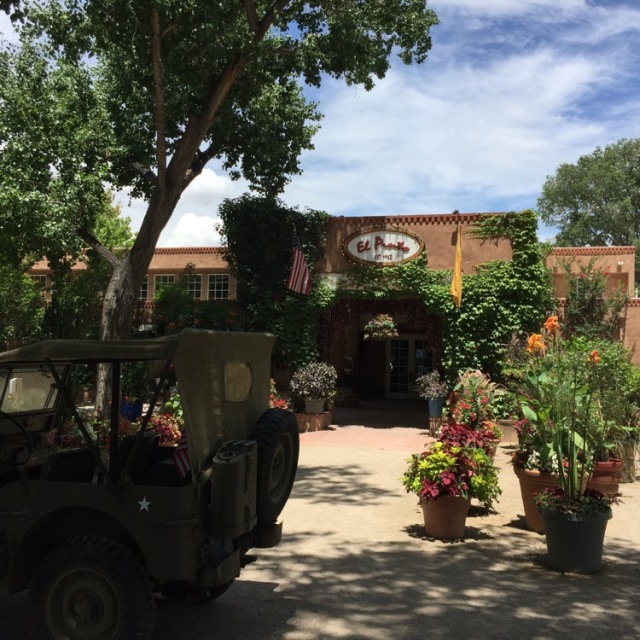 For our first meal on this road trip, before leaving, I googled for the best New Mexican restaurants in Albuquerque.  One name was at or near the top of several lists and I confirmed it with the visitor center guy / gal at the airport – El Pinto Restaurant.  Located in the North Valley, we drove about 20 minutes until we arrived at their location, near the Hot Air Balloon Park.  The first thing we noticed was the size of the parking lot – this place was huge!  Somewhere I’d read that it was the largest restaurant in the state of New Mexico, with nearly 11,000 square feet of dining space.  Upon entering, we were asked if we wanted to sit inside or out, and even though it was over 90° the outdoor patio was cool.  We took a seat at a table under a fan and this was our view.

Notice the strings of dried peppers.   They were everywhere around this restaurant.   And everywhere around Albuquerque.  We started with some guacamole, to accompany the chips and salsas that came to the table shortly after we were seated. 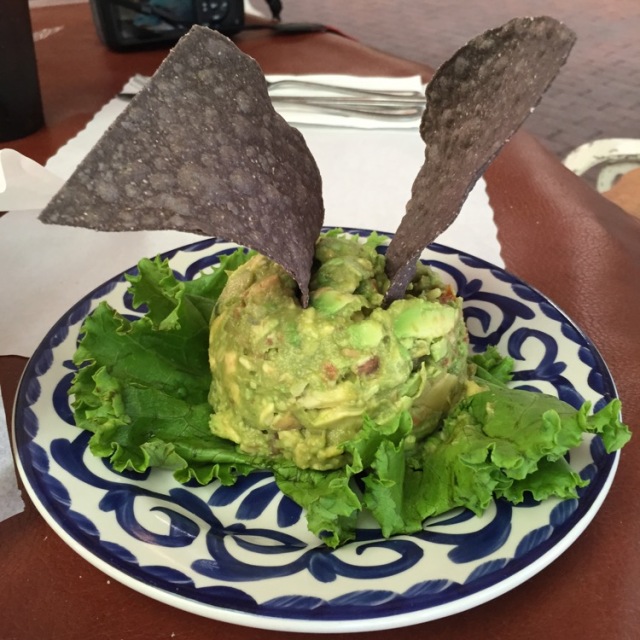 The guac was extremely fresh and very chunky.  Then came the food – Jo ordered the chicken adovada,

which was a chicken breast marinated in red chiles, served with calabacitas (we had to look this up – it’s a Central American side dish of zucchini, squash, onion, chilies and tomatoes) and a baked potato.  This chicken was  very spicy – almost too spicy.  I think that I enjoyed it more than she to whom it was served.  With all of the meals, they serve house-made sopapillas,

which arrived at the table, fresh and too hot to touch.  I didn’t wait, tearing off small pieces and dipping them in the honey.  I don’t speak Spanish, but I’m translating sopapilla to “little pillow of dough”.  They were amazingly light, like a hot Krispy Kreme doughnut.  And within 10 minutes they had hardened (again like a Krispy Kreme doughnut).

I went for the stuffed sopapillas, which were two sopapillas, stuffed with one of three meats (chicken, beef or pork) and either red or green chilies.

I couldn’t decide on what I wanted, so I asked for dealers’ (servers’) choice, and received one chicken with green sauce and one pork with red sauce.  Between the two was a medley of beans, lettuce, tomatoes and cheese.  The chicken sopapilla was good, but the pork with the red chilies was excellent.  This was a very good meal and a good start to a week of on-the-road eating.