So, the genesis for this blog was my first blog “In Search of the Perfect Burger”, which all began with a meal at Mr. Bartley’s Burger Cottage.  While eating there with our girls (roughly on August 5, 2008), I saw a map by the door, from the book Hamburger America.  As soon as we got back home, I went on Amazon and bought my first copy, which became my “burger bible”.   That first edition had 100 of the best burgers from across the country, according to George Motz.    I created a list from that book and began “checking off” burgers, as I traveled for work and on vacation.  The only entry in  that tome in New Mexico was Bobcat Bite.   When we planned to spend the night in Santa Fe, I knew where we were having dinner.

I plugged the address into my GPS and off we went.  As we pulled into the parking lot, I felt the wind go out of my sails. 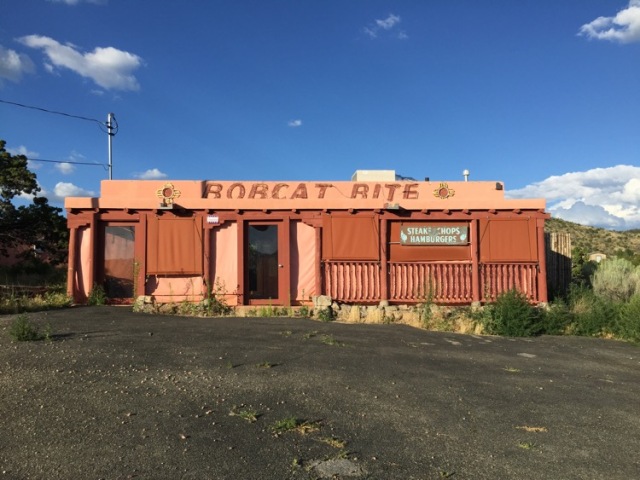 You see – I have this history of showing up at a restaurant on a day they are closed.  In fact, it’s a joke in my family (“Dad, are you sure they’re open?”).  But my book clearly said that they were open every day except Sunday and that they closed at 7:50 pm (yes, it’s a weird time) and it was only 6:30.  But this place was not closed for the day.  It was closed!  Stools on the counter, grass growing up through the floor on the indoor porch C-L-O-S-E-D.  Feeling defeated, I googled to see if the closing was indeed fact.  And there I found that the the owners, John and Bonnie Eckre, had opened Santa Fe Bite, inside Garrett’s Desert Inn, in downtown Santa Fe.   Back into town we went…

To quote Arlo Guthrie, I told you that story to tell you this one:

We arrived around 7:30 and were seated at a table near the entrance to the restaurant.  The restaurant certainly went through an upgrade with the name change – moving into the city, looking considerably less rustic and quadrupling (at least) the 24 seats at the Old Las Vegas Road location.   The menu was broader than I expected, with a variety of burgers and steaks along with enchiladas, flautas and (according to my wife, some very tasty) tacos.

I ordered the burger I had on mind before we left home – and the signature dish of New Mexico – a (10 ounce) green chile cheeseburger.  The burger was served with chips, as opposed to fries – this was the common side I noted at a couple of NM burger places.

The sliced green chiles under the cheese weren’t over-powering, but added “heat” to every bite.  This was a very good burger – I’m glad I got to try one.  Before we left, I told John that I had that burger on my list for eight years and that I really enjoyed it.  He replied that he was glad that I wasn’t disappointed.