I had seen a note on Eater Atlanta earlier this week noting that the Mercury had opened for lunch service in the last couple of weeks.  From the team behind Decatur’s Pinewood Tippling Room, the Mercury (with a decor resembling the early 60s) is on the second floor of Ponce City Market and features a menu focusing on steaks, chops and seafood.  We made a reservation for 1:30 and arrived a few minutes ahead of time.  I wondered to myself if the reservation was necessary, but by the time we finished dining the place was filling up.  I imagine a reservation would be a necessity at dinner, on a weekend night. 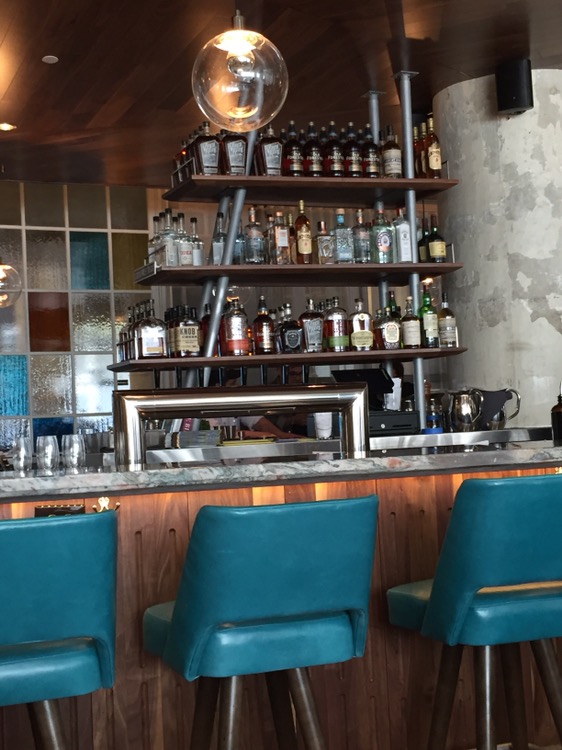 The dining space seats about 200, and is divided into three sections, and they have a very large bar in the front.  We were seated at a banquet next to the bar and looked “through the veil” into the section next door.

The lunch menu has a couple of entrees (day boat fish and a filet), but focuses more on starters and sandwiches.  The sandwiches are served with either a house salad or the French name for waffle fries. My love went with the fried gulf grouper sandwich with slaw, which the waiter said was an excellent choice.

She agreed that it was, indeed, an excellent choice, saying that the slaw was a perfect topping.  She ate every bite of the sandwich, leaving a few of the waffles.  The filet was battered in corn meal, which is hard to beat.  The only complaint would be that it was not hot when it came to the table.  I ordered the club sandwich.  You know that feeling you get when you’re ordering dinner and the waiter tells everyone what a great choice they’ve made as they order?  And then you order and they go “okay”?

That was the response to my club.  So I asked what he would recommend instead and he suggested the prime rib.  Order changed. 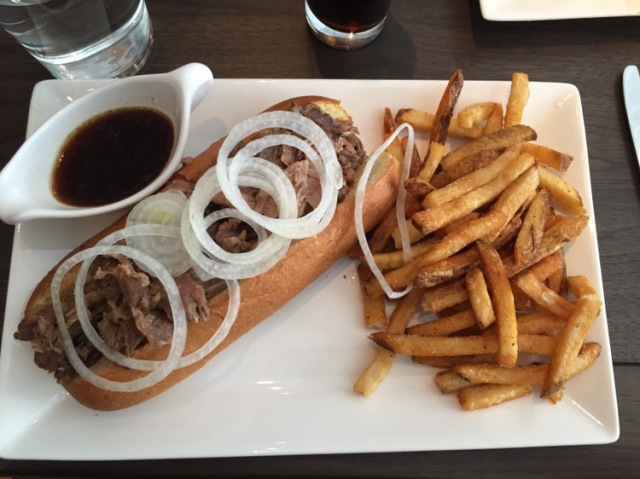 And I apparently upgraded from the waffle fries to their “3 day Merc fries”.  I don’t know what exactly those are, but there was a two dollar up charge.  The sandwich was served with a gravy boat of au jus, which was absolutely impossible to pick up – I dropped it onto the plate, splashing the sauce all over the place.  Once the gravy hit the bread, it became impossible to pick up and this became a knife and fork sandwich.

I had the horseradish held (that’s one thing that will ruin a meal in my book) and it was a fine sandwich – plenty of meat.  They proudly source their meat from Revere Meat Company, in Forest Park, according to their menu.  I hadn’t ever heard of the place and their under construction web page didn’t add much. This sandwich was cold, too.

We’ll have to go back and try dinner, but my gut feeling is that this is going to be a place known more for their cocktails than for their food.