For a (of recently) rare Saturday of roaming the city, we were heading to the Scott’s Antique Market.  The State DOT wasn’t cooperating, however, as the exits to both Jonesboro Rd and Moreland Ave, east–bound on 285, were closed with roadwork.  We had to sneak up on it, and found several spots to stop, along the way.  I had worked up an appetite, so I did a quick search for barbecue and John’s Fine Food came up, with over 600 good reviews on yelp.  But not for barbecue – for fried chicken!  That worked, too.

Walking up to the door, we were greeted with this sign:

How could we go wrong?

I stepped into the mens’ room to wash my hand and when I got back to the start of the line, my beloved said, “did you see their score?”  It was above 65 (my floor), so we went ahead and entered the cafeteria line.  We could see, in the kitchen, the bags of greens and sweet potatoes.

They had a steam table, the length of the restaurant, with meats (fried chicken, ribs, smothered chicken, hamburger steak and baked chicken and a couple more) and eight or nine vegetables, followed by desserts and a salad condiment bar. Note that I did not include a hyphen in salad-condiment bar, because it wasn’t a salad and condiment bar – it was items you’d find on a salad bar, sold as condiments (a slice of tomato, sliced jalapeños, etc).  That did come in handy when my beloved asked for pepper sauce for her greens – they dipped a to-go cup in the sauce for the peppers and put a lid on it for her. 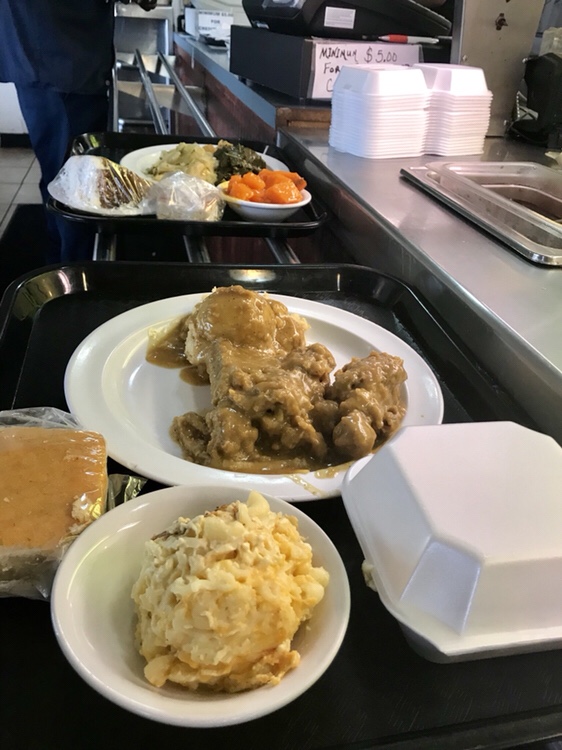 The lady working the register was a gem – she was carrying on a running conversation with everyone that came through the line.  I asked how long they had been open – she said they had been open since 1998.  And she’d been there since 2006!

My dear wife went with a vegetable plate – greens, fried okra, steamed cabbage and sweet potatoes. She said the okra was great and enjoyed the cabbage, a lot.  The sweet potatoes were just average and the greens were a little sweet, but with that pepper sauce and the cornbread crumbled up in it, she enjoyed the greens, thoroughly.  And that coconut cake?  She had part with lunch, a little in the car and the rest before bed.

I was leaning toward the fried chicken, but the smothered fried chicken lured me away. I had mac-n-cheese and cornbread dressing as my two sides.  Given the choice, I had the gravy from the smothered chicken on the dressing.  The mac-n-cheese was a little sweet, but tasty, but the cornbread dressing was the best dressing I’ve had since my mom’s cooking, back in her glory days.  I kept seeing this fork creep across the table and grabbing a forkful of dressing…

And I finished it off with the banana pudding.  I was only able to eat half, after the plateful of dressing, but I finished the to-go container late evening, while the last of the coconut cake was disappearing.  It was interesting pudding – almost like the bananas had been soaked in a citrus juice of some kind.